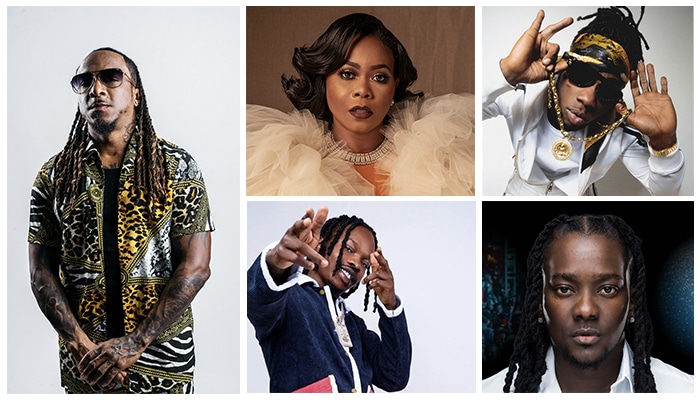 FROM STYLO G TO KERWIN DU BOIS, HERE ARE 5 MUST SEE ACTS AT KABOOM FESTIVAL IN TORONTO

The hottest artists in dancehall, soca and afrobeats are officially touching down in Toronto for the launch of Kaboom Festival from August 13th to 14th.

With Caribana just around the corner and the melodic tunes of soca and reggae filling our ears throughout the Toronto streets, we’re getting ready to prepare for one of the most promising and eclectic festivals of the summer––Kaboom Festival 2022.

Kaboom Festival is kicking off its first ever event by Sho Entertainment. With some of the most notable artists in the Afro-Caribbean music scene, Kaboom Festival is one fête in Toronto that you do not want to miss!

Here are some artists you don’t want to miss that will be performing at the festival.

Grenadian-born Mr. Killa, is known to bring his electrifying energy to the stage. With his unique vocals and crafty footwork, he knows how to put on a show and demand an encore. Getting his start at music from an early age, he’s been soaring through stardom in the Caribbean and beyond. Some of his hits include “Rolly Polly”, “Oil It Up”, and “Fever”. You can see him perform on Day 1 (Saturday, August 13th) of Kaboom Festival.

Soca legend and queen, Nadia Batson is a Trinidadian-born singer and songwriter. In 2011, she formed an all-female soca band called SASS Nation. Her good vibes and high energy spirit will bring you back to the beautiful land of Trinidad, right into the middle of a soca fete. Her hits “One Island”, “Catch Feelings”, and “No Pressure”, can be heard and sung throughout the Caribbean and North America. The beautiful Nadia Batson will be at Kaboom Festival on Day 1 (Saturday, August 13th).

Kerwin Du Bois, is a known soca and calypso king. Coming from none other than Trinidad and Tobago, his soothing, hypnotic, voice captures crowds from far and wide. Some of his top hits include “Bacchanalist”, “Monster Winer”, and “Too Real”. If you want to carry the caribana spirit into August, this is a performance that you do not want to miss!Kerwin Du Bois will be performing on Day 1 (Saturday, August 13th) of Kaboom Festival.

Nigerian native, Naira Marley, blends afrobeat and hip hop to make his own unique sound. His fan base, known as “Marlians” stretches from the UK, Africa, and North America. He’s known for his hits “Soapy”, “Am I A Yahoo Boy”, and “Mafo”. When performing, Naira Marley knows how to get his audience hyped and he loves to show off his African-inspired dance moves. Catch Naira Marley on Day 2 (Sunday, August 14th) of Kaboom Festival.

Dancehall legend, Stylo G, was born in Jamaica and brings all the heat to his performances. Known for some of his top hits, “Touchdown”, “You Zimmie”, and “X5”, his tunes are sure to leave you dancing and whining up. Son of the one and only Poison Chang, he’s been following in his Father’s footsteps musically. His flashy outfits and lively stage presence makes for a show! Check Stylo G performing out on Day 2 (Sunday, August 14th) of Kaboom Festival.

Kaboom Festival is one you do not want to miss. Whether you’re a reggae, soca, dancehall, or afrobeat fan, this festival surely has an artist for you.

You can purchase tickets on Ticket Gateway, for both days or for either Day 1 or Day 2.