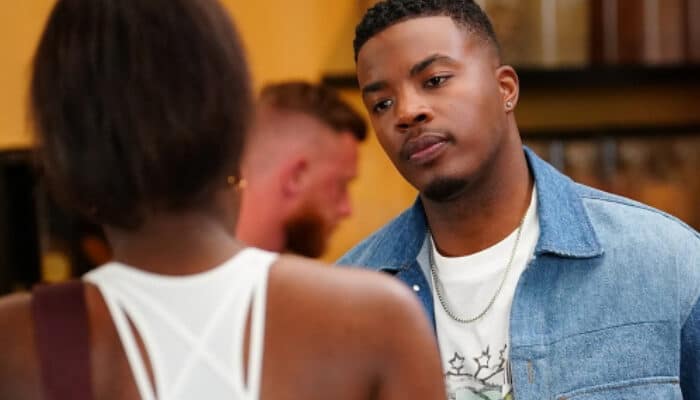 Change is in the air. Through his new social media savvy friend Davita, Spencer is reminded of why he loves football. Meanwhile, Asher, Coop and Patience embrace new changes. Here’s our All American season 4 episode 14 recap.

Things are a little awkward between Patience and Coop as they learn to co-exist and navigate being roommates and exes.

Spencer is once again invisible with Coach Garrett after his fumble in their last game. A new character, Davita, is introduced as a former athlete, as well as a fellow student, fan, and new friend of Spencer’s. As a young marketing guru, she helps him to up his social media game to make him look like the star he is. Unfortunately, Liv isn’t exactly comfortable with Spencer’s new friend as the two don’t exactly see eye to eye on Davita’s approach to getting Spencer back on the field. But in the end, what Davita really does is help him find himself again. This leads to Spencer seeking out a new role with his team.

Meanwhile, Asher looks to find a role with Coach Montez, but first he has to start by helping the players to get back on track with their academics; this includes JJ whose grades are slipping, threatening his football season. As a result he must find a tutor who isn’t impressed with the lack of adversity in JJ’s seemingly perfect, social media curated life. JJ reaches down deep into his past struggles to write his paper, impressing his new tutor.

Over in Crenshaw, Laura is accused of having a White Savior Complex and realizes she doesn’t have a great reputation in the community from her time as DA. With Grace’s help, she has to learn how to build a new relationship with the community.

The episode ends with Coop sharing a valuable lesson from her soap opera watching grandmother―don’t try to fix everything. It’s a fitting end to the episode with the unfolding storylines and Spencer and Liv’s need to fight for the people around them, but we’ll have to wait for next episode to see if they get the message.