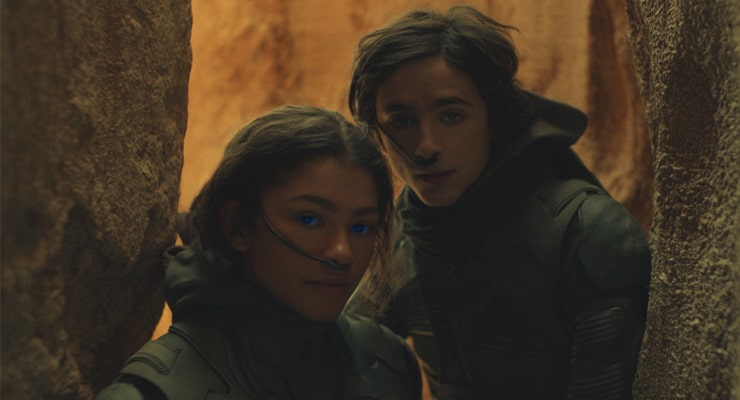 From the acting, action sequences, and visual effects to the score, Dune is “simply epic” says SHIFTER’s Kevin Bourne in his Dune review.

Groundbreaking Oscar-nominated director, Denis Villeneuve, has returned with Dune, the story of Paul Atreides (played by Timothée Chalamet), the son of Duke Leto who embarks on a harrowing journey to the most dangerous planet in the universe to preserve the legacy of his family and people. At the core of this intergalactic power struggle is spice which has become the most important commodity in the universe. Based on Frank Herbert’s bestselling novel of the same name, it is a coming of age story for the king-in-waiting who is forced to put his training in combat and his special gifts to the test on this death defying mission.

The film explores a variety of themes including facing and overcoming ones fears. We also see different relationship dynamics play out on screen as Paul learns who he can trust; most importantly learning to trust himself.

Chalamet shines in the lead role as he portrays the wise beyond his years Duke, while still revealing his youth, zeal and inexperience. Rebecca Ferguson (“Stephen King’s Doctor Sleep,” “Mission: Impossible – Fallout”) delivers an equally believable performance as Lady Jessica, his mother and concubine to the Duke who not only gave him his unique powers, but is forced to train him in how to use them (think Obi Wan Kenobi and a young Luke Skywalker). As he learns to trust himself, she in turn must learn to trust her son as he grows into the man and leader he was destined to be.

Also appearing in the film is Jason Momoa (“Aquaman,” HBO’s “Game of Thrones”) who sometimes draws criticism for playing the same character in all of his roles. While Momoa plays the predictable role of the muscle-bound warrior and swordmaster, Duncan Idaho, in service of the House of Atreides, he breaks the mold slightly by revealing deep love, affection and loyalty to Paul. Meanwhile, Oscar Isaac (the “Star Wars” franchise) is the wise and almost fearless Duke Leto Atreides. As one of the few characters in the film who isn’t some sort of alien being or doesn’t have a special power, he not only provides a human touch to the film and a connection point for audiences, but he impresses as he is able to rule and garner respect and loyalty simply off the strength of his character.

Rounding out the cast are Zendaya (“Spider-Man: Homecoming,” HBO’s “Euphoria”), who in limited screen time continues to show depth and maturity as she evolves from a child Disney star, as well as Oscar nominee Josh Brolin (“Milk,” “Avengers: Infinity War”), Dave Bautista (the “Guardians of the Galaxy” films, “Avengers: Endgame”), and Stellan Skarsgård (HBO’s “Chernobyl,” “Avengers: Age of Ultron”).

Denis Villeneuve’s Dune is simply epic in every sense of the word, from the acting and action sequences, to the score from Oscar-winning composer Hans Zimmer. The grandeur of the film is accentuated by captivating shots and landscapes, including large and arid sand dunes, that not only create a sense of desperation but leave you feeling amazed at the beauty and expansiveness of the world they live in. Between the shots, action and visual effects, viewers may have trouble deciding where to look on the screen.

While the film is said to be true to the original novel, viewers will be able to enjoy it without having read the novel or watched the original 1984 adaptation of the film. If you like the Star Wars franchise you will definitely enjoy Warner Bros’ and Legendary Pictures’ Dune.

JARRED MCGRIFF DELIVERS BLACK EXCELLENCE IN FRONT AND BEHIND THE CAMERA