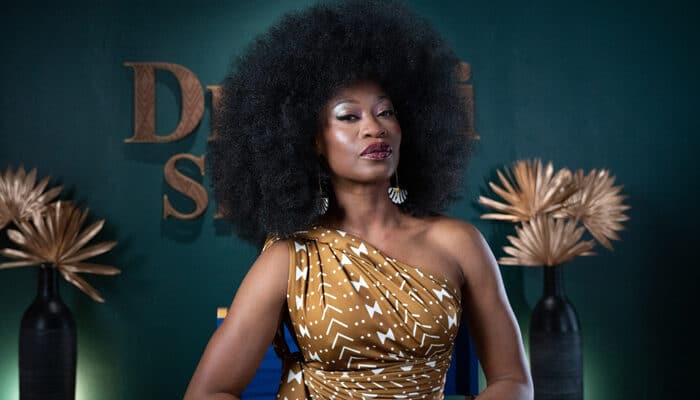 Revenge Of The Black Best Friend tells the story of actor turned self-help guru, Dr. Toni Shakur, who supports actors who have been cast as token Black characters.

Canadian playwright, filmmaker, and journalist, Amanda Parris, has been on a bit of a run in recent years. Although she is known as an arts reporter and producer for the CBC, she has kept busy with a flurry of creative projects and ventures. First, she made her theatrical debut in 2017 with her play Other Side of the Game. Then she won the 2019 Governor General’s Award for English-language drama for her book of the same name. Then came The Death News, written by Parris and directed by Charles Officer as a part of CBC’s Mumbi Tindyebwa Otu-commissioned anthology series 21 Black Futures. He work on CBC’s Exhibitionists and The Death News led to her taking home the trophies for Best Writing in a Web Program or Series and Best Host, Talk Show or Entertainment News. This is on top of taking home the Changemaker Award alongside TSN anchor Kayla Grey and Refinery29’s Kathleen Newman-Bremang.

Her latest project is the episodic series Revenge Of The Black Best Friend about former actor turned self-help guru, Dr. Toni Shakur (played by Olunike Adeliyi) who has risen to fame by supporting Black actors who have been cast as token Black characters, from the thug to the sassy Black best friend. Through her book, talk show and and ‘90s style infomercials, she’s on a quest to rewrite the stereotypes holding back Black actors.

For Parris, who recently screened the series at the Cannes International Series Festival, the inspiration for the project was personal. It was sparked back in 2018 when Parris decided to revisit some of the old shows and films she loved.

“The kernel of the idea came from an experience I was having a few years back”, Parris told SHIFTER in a recent interview. “I just started re-watching a lot of the shows and movies I grew up loving…I kind of had a rude awakening when I realized that the Black characters in those shows and movies, that I had remembered as being way more important, were not that important actually. They were very marginal. They didn’t have a lot of lines. They actually didn’t have last names, love interests or parents. I just remember feeling very disappointed and that feeling of disappointment stayed with me. I felt like I wanted to do something with the disappointment.”

Now, what you immediately notice in watching Revenge Of The Black Best Friend is that while the series feels distinctly Canadian with strong Toronto influences, it’s unlike anything we’ve seen on Canadian television before, from the humour and writing to the acting.

The writers have done an excellent job addressing Black stereotypes in film and television, the stealing of Black culture and ideas, as well as the relationship between the white establishment in film and TV and Black actors, through sarcasm and humour. While the series is a type of comedic yet realistic commentary on the film and television industry, with Black actors as its casualties, it is also a bit of an ode to the Black talent who have gone unnoticed as a result.

Although the underlying story and theme apply to all members of the Black Diaspora, there are some distinct Toronto nuggets in there, from Korrey, the Toronto thug, to a cameo from Canadian broadcaster Tyrone Edwards, who Parris knew from their days growing up in their Weston Road neighbourhood.

The series also explores other underlying themes that support the story, including cancel culture, as Shakur’s reputation takes a hit after mounting public accusations.

Revenge Of The Black Best Friend will make you laugh and feel a sense of familiarity as we see our Black Canadian culture depicted onscreen, but it will also make you sad and angry as you learn more about the inner workings of the film and television industry and the injustices faced by Black actors.

When asked whether we can expect a second season, Brathwaite, who is also co-executive producer on the series, replied, “The goal is open, but there’s big dreams and visions for where this can go. I think the people want to see another season because of how it ended. It can make you wonder what comes next in the story of Dr. Shakur.”

To check out Revenge Of The Black Best Friend for yourself head over to CBC Gem.