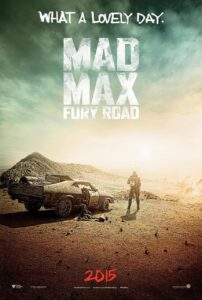 Thirty years has now passed since we last saw Max Rockatansky on the road. The last time we saw him, the character was portrayed by Mel Gibson, whose performance in the original trilogy was well-received among fans and critics alike. George Miller had done an incredible job directing this action packed franchise. After three decades, George Miller decided to come back for the fourth installment and I’m very glad he did.

Set in a post-apocalyptic future, Mad Max: Fury Road follows the dangerous adventures of Max Rockatanksy, a lone survivor on the edge of his sanity who only relies on himself. Early in the movie, Max gets captured by a group of survivors lead by the tyrant Immortan Joe, a man who has enslaved the same people who worship him. A series of events lead Max to pair up with Charlize Theron’s Furiosa, an amazing female character who might arguably be considered the main character of the movie. The two end up being chased in the desert by Immortan Joe’s army which takes us into the main storyline.

Just as any fan of the franchise would expect, this movie is action-packed. As a matter of fact, it can be considered one giant, epic action sequence. What’s surprising is that Fury Road’s storyline never gets neglected. Most action movies, especially summer blockbusters, have a tendency to suffer from a lack of development in their storytelling. Among its many strong points, Mad Max: Fury Road manages to develop its characters as well as introduce different story arcs at a very fast pace. All of that while blowing up cars, blasting old school rock music and giving the audience some incredible one liners. Tom Hardy also gives an incredible performance, considering that Max Rockatansky is not a very talkative character and that most of his lines consist of a maximum of five or six words. Charlize Theron also manages to steal the show as Furiosa, a character so loved by the audience that the studio is currently in talks to get her own spin off movie on the road (no pun intented).

Although an argument can be made that its charm resides in its violence, gore and vulgarity, I wouldn’t recommend Mad Max: Fury Road to the squeamish.