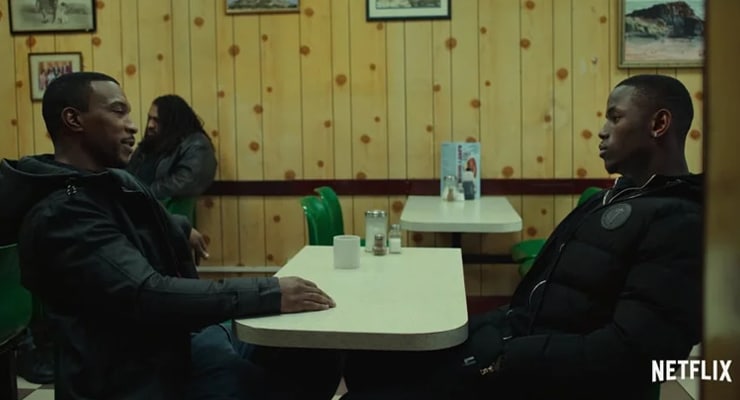 The last time we saw Dushane (played by Ashley Walters) he was giving his nemesis Jamie (played by Micheal Ward) an offer he couldn’t refuse after holding the keys to his freedom.

Season two picks up where the previous season left off, but first we’re introduced to a new character―Spanish drug supplier, Emilio. The episode opens with the drug kingpin murdering someone in the middle of the ocean, contrasted with his humanity as he learns his wife only has three months to live, promising her he will leave the business behind and take care of their daughters.

Jamie then gets his day in court and is found guilty based on the new video evidence. He’s greeted by his mates, but one thing they don’t know if that he made a deal with work with their former enemy Dushane in exchange for the video evidence. The two one-time rivals meet and Jamie gets working learning the business.

Meanwhile, Sully, wracked by guilt, visits the rooftop where he killed his long-time friend Dris, as well as his old apartment at Summerhouse which is about to be redeveloped with many losing their homes. What everyone doesn’t know is that Dushane has put money into the project to clean his money. But similar to Ghost in Starz’ Power, it’s a part of his plan to go legit.

Similar to previous seasons, the story begs the question, “Who can you trust?” with the season premiere featuring a number of murders and former friends Dushane and Sully still at odds. Where Sully appears to be paralyzed by guilt about murdering Dris, life has gone on for Dushane who clearly has no remorse as he focuses on his business and family.

There’s also a brief side story about racial profiling and police brutality as Jaq (played by Jasmine Jobson) and the crew are pulled over for a “routine” traffic stop. The scene is jarring for the characters and perhaps equally for viewers, especially those who can relate to the scene. It’s a realistic depiction of life for Black youth in inner cities across Western society.

Helping to tell the story is the soundtrack, which includes everything from Afro Beats as we’re taken through the street of inner city London, to Reggaeton as we’re taken to Spain. With Drake and his manager Adel “Future” Nur on board as executive producers, you would expect the music to be on point and a big part of the show. Also important to the evolving story are the landscapes. The grimy and dark streets of London are contrasted with the deceivingly beautiful yet dangerous Spain where some of the more violent scenes occur.

Overall, the episode successfully depicts the humanity and different (and sometimes contradictory) sides of key characters, which is something we don’t often think about when it comes to people who choose a life of crime.

If the Top Boy season 2 premiere is an indication, this season was definitely worth the wait.