Kevin Williamson, who goes by Ktriggs, is a Hamilton, Ontario-based entrepreneur, recording artist, and the creator and owner of his brand Freedom of Speech Entertainment. With his fantastic work ethic and dedication to displaying his message of freedom of speech on all media formats, he established the brand in 2019, a year after entering the Hamilton music scene as an artist, emcee, and event host.

Having gained experience studying at Trebas Institute in Toronto for Entertainment Management, he balanced his time in the industry while making a lane for himself to be a part of the music scene in Hamilton. Since then, he has hosted his annual event The Underground Vibes Show which showcases rising talent from Hamilton and the GTA. Freedom of Speech Entertainment had the opportunity to showcase their first-ever “905 Fest” at Woodlands Park in Hamilton as a way for Hamiltonians to come together and celebrate as a whole.

905 Fest was also created to spread awareness towards at-risk youth in Hamilton with a charity basketball game during the festival. 905 Fest has partnered with Kiwanis Boys and Girls Club to host and showcase this event and has gained sponsorships from the Hamilton Tiger-Cats and other local businesses and artists. The event was first held in 2019 and ceased operation in 2020 due to the pandemic. However, the event returned last year to raise awareness for a local organization called the Living Rock Youth Services, and the event allowed patrons to donate non-perishable goods to the organization. Williamson has organized the event all on his own and has managed to book various performers and vendors to showcase their work and talent. 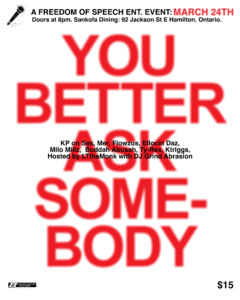 Since his career began, the Hamilton artist consistently has recorded and released up to seventeen singles and two projects on many distribution platforms and has done four features. In addition, he has since released up to thirty-four songs on all streaming platforms and twenty music videos on YouTube. Williamson will also host his next event, You Better Ask Somebody – A Freedom of Speech Event at Sankofa Dining on March 24th, 2022. Stay locked to his Instagram and Facebook accounts for more more details about the event.