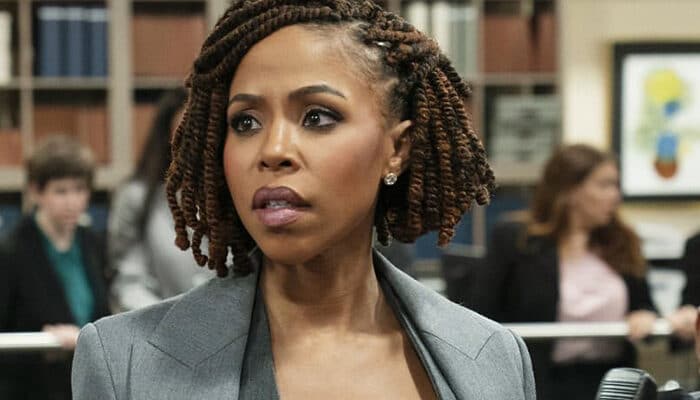 Karen and Aaron are still at the doctor. With the new timeline for her pregnancy, Karen determines that the baby could be Aaron or Zac’s (of course, we all knew that. Karen seriously is late to the party). With the “good” news, “Clingy Aaron” does what he does best; get even more clingy (and cringy). As a result, Karen asks Aaron for some space.

On this episode, we also get Round 1 of Andi vs. Hayden. Actually, it’s more like the pre-fight weigh-in, chirping back and forth before the main event. For Hayden, it’s all about making Fatima miserable. After he lets Andi know that he knows about her relationship with Robin, Andi threatens to use her closeness with Robin to get her way. Hayden also confides in Gary that he got Fatima arrested. This Gary-Hayden team is one to watch; a legal mind and a money man are a dangerous combination.

This is the perfect segue to a revealing conversation between Gary and Jake. While it appeared Jake was the one gunning for Zac for insider trading, we learn that it’s really Gary who is after him, setting up some beef between Gary and Zac. Fortunately, Jake isn’t having it and is about to sound the alarm.

One of the things this episode does well was give other characters some screen time and develop some of the other stories outside of Fatima, Zac, Hayden and Ani.

This episode we got to see more of Danni who pays Zac a visit pressing Zac on his treatment of Karen in the past and him being the father of his baby. Zac in-turn presses Danni on her treatment of Preston. She finally admits to liking him, but she can’t get past their differences.

Similar to last episode, Maurice’s extra-ness and comic relief was saved for closer to the end of the episode. While Maurice has no intention of dealing with Q’s antics, he arrives at home to find Calvin and Q having a nice dinner; one that Q made dinner. After a lot of huffing and puffing, Q reveals a deep dark secret―he was abused as a child, adding even more humanity to his character.

Then we finally get the moment we’re all waiting for. Zac comes to the office to see Fatima only to find out she isn’t there. Andi gives him the run around until Hayden chimes in about what happened to her. After Hayden pushes his buttons, celebrating he got his “bitch” put in jail, all hell breaks loose.

All of this sets up some interesting questions. Will Zac will end up with Fatima behind bars? Are we going to see a clash between Hayden and Robin? Is Danni finally going to let Preston know how she feels? We’ll have to wait another week to find out.