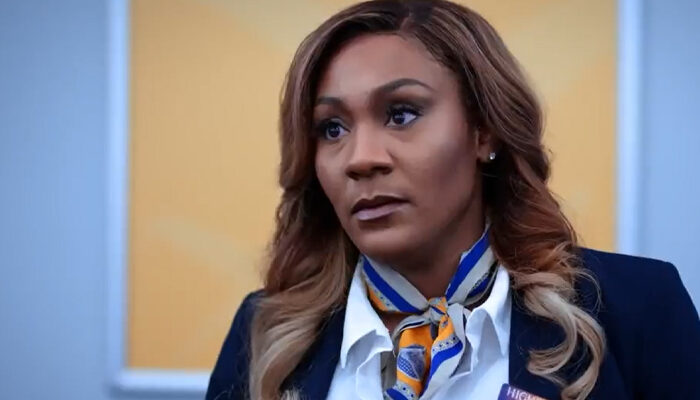 Andi and Gary go head to head again, and Fatima has another run in with Karen. Here’s our Tyler Perry’s Sistas Season 5 Episode 2 recap.

The episode begins with Preston’s ultimatum. Will Danni tell him to stay or go off and marry another woman? Her inability to tell Preston how she feels is sad and frustrating. She clearly loves him, but she continues to let their differences get in the way. But in the end, she has a decision of her own to make as she may have met her new man.

Karen is still in the hospital waiting for the news about the baby. After feeling confused about what she wants, she asks Pam to call Zac to let him know what’s going on. But, plot twist—Aaron shows up at the hospital unexpected. Karen’s response? “Shiiiiiit” followed by Aaron saying apologetically, “Sorry, I didn’t mean to impose.” This man clearly can’t take a hint.

Thinking Fatima told Aaron about her business, Karen calls Fatima calling her a bitch, while getting mad at Zac for knowing she’s in the hospital and not coming to see if she was okay. That’s right. After having some of us feeling bad for her last episode, she’s back to her crazy ways. Fatima in turn gets mad at Zac for not setting Karen straight. He tries to, stopping at Karen’s house after she finally leaves the hospital, but Miss Lisa, aka Karen’s mom, ain’t having it.

Meanwhile, with their big showdown in the rearview mirror, Gary and Andi decide to see each other to basically do some couples exercises, listing the good and bad traits of their relationship. They meet up at her place and the sexual tension is thick. They go over their lists, but it doesn’t end how we think. Let’s just say Gary and Andi are a mess; a big, hot, sexy mess.

Danni is still playing detective, showing up at Maurice’s house looking for him. After a convo with Calvin where she compliments him on his “lovely” and “colorful” blouse, she heads over to Andi’s place, walking in on her and Gary doing more “couples exercises”.

Unfortunately, if you were looking forward to seeing Maurice or getting that All The Queen’s Men crossover, you’ll have to wait a bit longer.