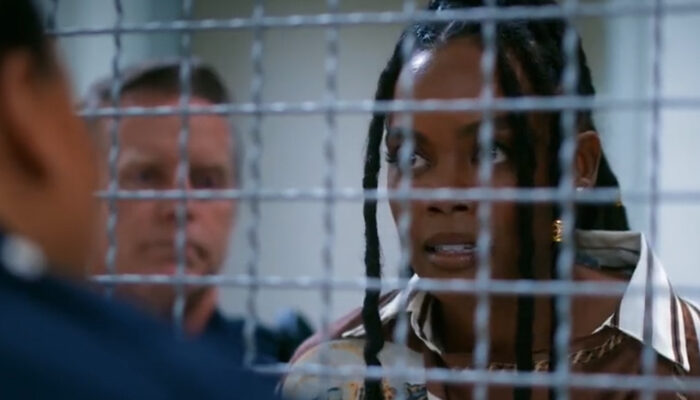 Andi and Gary face off, Karen worries about her baby, and Sabrina goes to jail. Here’s our Tyler Perry’s Sistas Season 5 Episode 1 recap.

Yessir! After months of waiting, the drama and mayhem that is Sistas is officially back.

The season four finale saw Karen bleeding in the salon raising some questions about the health of her baby. Well, this episode opens with Karen and Pam in the doctor’s office leading to more questions about what’s going on with Aaron Jr. (we all know it’s his). Karen’s mom comes to her side to comfort her. Karen explains the whole story, including not knowing who the father is and that she’s still in love with Zac. After Karen’s mom share her own story, it turns out they have more in common than they thought.

While Gary is in the office scheming with Hayden about suing Andi, she walks in with Fatima leading to standoff between the foursome. Gary reveals his plans to sue Andi for the apartment and car he gave her, as well as pain and suffering (Does he not remember he was the one at his window spying on her, telescope in hand?) After asking Fatima to leave the room, Andi cries some crocodile tears, pulls on Gary’s heart strings, and gets him to rethink his plans. They both realize this is the end for them. This was actually a great scene. Seriously though, what started out as nuclear way ended up being a beautiful moment. It was probably the healthiest conversation we’ve seen from them yet.

Meanwhile, we’re starting to learn more about Que’s involvement in Maurice and Sabrina’s arrest. Usually aloof and unaware, Calvin comes home and suspects Que is up to something. Later, we see Sabrina getting processed in jail and being treated like a criminal. She won’t survive in jail; she clearly isn’t built for that life.

Now, the first Zatima moment happens when Zac pops into the office to surprise Fatima at work, much to Hayden’s dismay. Luckily, Zac is too happy and in love to punch him in his face. Zac takes Fatima back to the place where they met where they share a special moment.

There was clearly a trend this episode of the men showing up at the place of work of the women they love as Aaron pops up at the salon after trying to reach Karen all day leading to a convo with Andi who is also looking for Karen. Aaron tried to stick up for his homeboy Gary to no avail. Andi ain’t having it.

Near the end of the episode, Preston returns to Danni’s work to profess his love for her and to give her a bit of an ultimatum.

Although some may disagree, this was actually a pretty good episode. It wasn’t spectacular as some have noted, but it did its job in getting our appetites whet again and setting the stage for next where we expect even more drama.

Speaking of drama, the only question I have is, “Where the hell is Maurice?” We didn’t wait months to not see Maurice. Him in jail is going to be some amazing comedy. Let’s hope he gets some serious air time next week.

Also, stay tuned for our SHIFTER TV talk episode dropping Thursday on the SHIFTER YouTube channel where we’ll be breaking down the premiere even more. Subscribe and click the notification bell to get the notification.