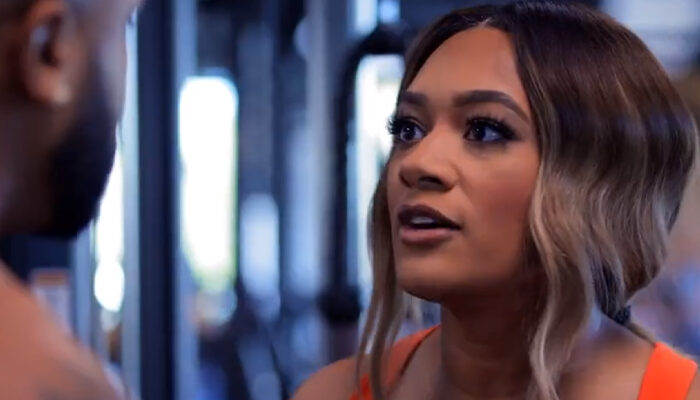 Zac and Fatima are having friction and Andi and Gary has some explaining to do. Here’s our Tyler Perry’s Sistas Season 5 Episode 3 recap.

Andi has explaining to do. Episode three opens with Danni wondering what happened between Andi and Gary (and commenting on how well endowed he is). She sticks around to make sure he leaves before going in on Andi for being MIA while her girls are going through some dire situations. Not only was she not there when her girls needed her, but she missed a call from a client. Later we learn that Sabrina has been charged, and Maurice has made a confession on tape. He doesn’t appear on this episode, but the build up to his season debut may not necessarily a bad thing after all. It’s creating some expectation. Let’s just hope they execute properly.

Meanwhile, Calvin heads to the gay bar to find Maurice or to get some answers. He runs into the bartender and  discovers he’s in jail. The bartender decides to back up Calvin as he goes to kick Que’s ass (we know he’s not doing anything). They return how to find him in bed with a woman (plot twist). Calvin and Que finally throw down and Calvin actually holds his own. Other characters like to allude to him being gay, commenting a lot on his “blouses”, not that there’s anything wrong with it, but this season he’s had enough and has been “manning up” a bit. With the whole Maurice and Sabrina story, Calvin and Danni have become unlikely allies.

Speaking of Danni, she’s having some problems of her own. After leaving town, Preston wants to come back to meet Danni for dinner, unfortunately she’s still not giving him the time of day. She’s not going to realize her mistake until it’s too late.

Karen seems to be in better spirits. She woke up to breakfast and a heart to heart with her mom who gave her some advice about having Zac and Aaron over to let them know how she feels. She just needed some love, but could her mood change be because she had no interactions with Aaron this episode?

In the latest Zatima news, Fatima is acting weird after what happened the night before. According to her, she just wants peace. Although we haven’t received an All The Queen’s Men crossover, Fatima talks about her cousin introducing the character. This conversation offers more insight into Fatima’s origin story, including why she’s a thug in Zac’s words. We also find out she’s the one who took care of Hayden for Fatima last season when he was beat up in the office parking lot.

Things get heated between them when his sexy tenant wants him to come over to do some repairs. You know Fatima would have something to say. Her telling the girl “Wash your face” was some of the best comedy this episode. This leads to her asking him if he’s still in love with Karen. He denies it, but she isn’t convinced. Him calling her “Karen” didn’t help.

Aaron runs into Zac and Fatima in the gym, asking Zac to agree to not stress her out now that she’s left the hospital. Of course, Zac isn’t feeling Aaron’s approach. Part of me wants to commend Aaron for being grown and mature, but part of me thinks he’s lame. Again.