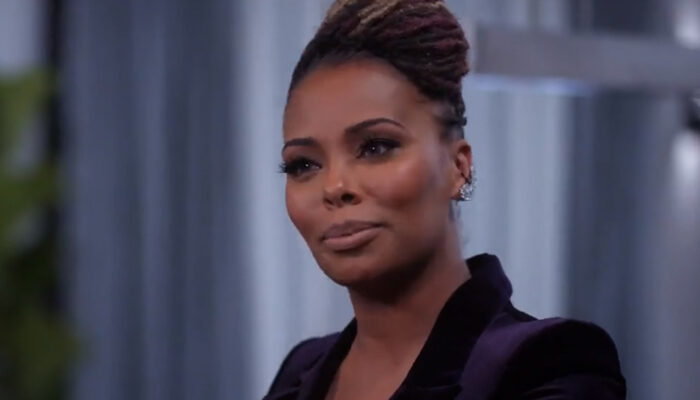 Andi and Hayden continue where they left off. He threatens to tell Gary that Andi is playing him and reveals that he was the one who set up the meeting between Gary and Robin. We learn later that Gary and Jayden are working together in trying to take over the law firm.

It looks like Gary and Robin are gonna be doing some business together, but the conversation turns personal as they set the record straight about Andi.

Andi tries to ask Robin for help with Sabrina but he’s done with her. Congratulations Andi, you played yourself. Robin gets super foul asking her if she has any sexually transmitted diseases. Wow. He also went in on her about her work at the office. She deserved it. She’s been playing him and Gary for months, but “damn!”

With a face full of tears, Andi finally fills Fatima is on what’s been happening to Sabrina and offers to introduce her to her cousin. Fatima is going through her own stress as she’s worried about Zac meeting Karen.

Meanwhile, Que is cringeworthy, trying to flirt with Danni at the airport. She violates him though calling him a scrub and commenting on his ankle monitor. Danni is a hilarious character, but this scene was a bit long. Later she goes out with her new (married) man, but we all know she’s ending up with Preston.

Miss Lisa is the MVP of this episode, bringing stability to all the drama, again. Aaron arrives asking Karen for the awkward hug.

Miss Lisa has no filter. She calls Aaron sexy and questions him on not drinking but having sex as a preacher. It’s not a bad question. In that scene she reveals she likes younger men. She’s wildin’. Wise mom might be a freak. Plot twist.

Andi comes over to keep Fatima company while he goes to meet Karen and to meet Fatima’s cousin. As Zac leaves for the meeting with Karen and Aaron, we find out Zac’s full name is “Zachary Taylor”. Maybe everyone knew this except for me.

A new character is introduced as a girl from upstairs at the office joins Andi and Fatima. At first I was like, “Don’t tell me this is Fatima’s cousin and they’ve been playing us for a month. But the moment we’ve all been waiting for arrives. No, not a Maurice sighting—Eva Marcille, aka Marilyn, aka Madam. Finally.

Zac arrives at the meeting and greets Miss Lisa. The hug showing the history and mother-son relationship between the two. She wants to work everything out and put everything on the table and from the scenes from next episode, shit’s about to hit the fan.