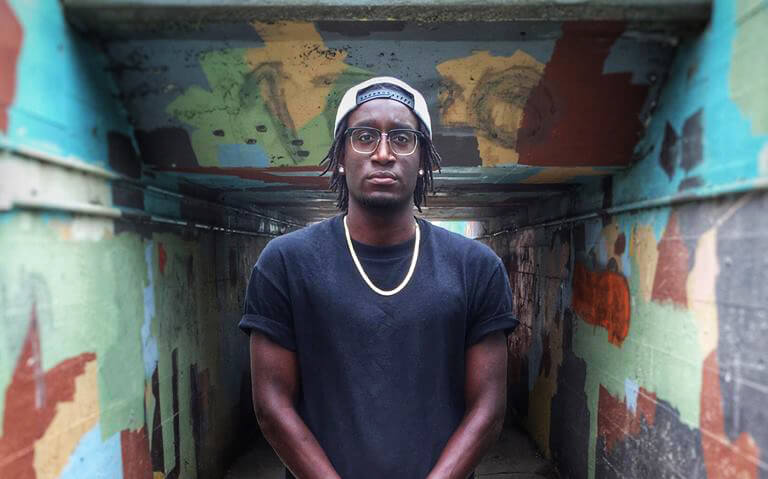 For Winnipeg rapper, Scribe, the road to recording artist has been a long journey that crosses international borders. Born in Jamaica, Scribe immigrated to Canada at three years old, settling in Regina, Saskatchewan, adopted into a loving family.

For Scribe his first love was soccer. His love and talent for the beautiful game would take him across Canada playing at provincial levels and eventually to a Real Madrid soccer academy in Mexico and college in California.

It wouldn’t be until 2009 that he discovered his ability to rap. First known as “Young Scribe”, it wouldn’t be until 2012 that he got serious about hip-hop, joining the Winnipeg-based independent hip-hop collective KMF led by his friend and mentor Fresh IE. That’s the year his education, soccer and music led him to make the permanent move to Winnipeg, bringing him closer to his KMF family. It was also around this time that Scribe got married and became simply known as Scribe.

I changed my name quite simply because I felt it was time to grow up and take on a more adult persona that was beckoning whether I liked it or not. Also, I believe that when a person here’s the name “Scribe”, their mind tends to lead them to thinking of something or someone of poetic literacy, as appose to “just being a rapper.” I want my music to transcend genres, and as such, I wanted a name that was just as versatile.

The change was warranted. In comparing his new music, like his new single 5am, to his older work you can hear his growth as an artist and person. He’s a lot more sure of himself. He knows who he is, what he wants to say, and what he’s about.

Since then he’s released his first full length album, the GMA nominated, The Callout, and a mixtape Quill & Ink Vol. 1, which Scribe calls “a quick trip into my creative mind.”

What sets Scribe apart from other rappers is how he sees his craft. For him hip-hop isn’t only his way of expressing himself creatively or entertaining a crowd. He’s a throwback to old school rappers like Grand Master Flash and KRS-One, using his words to speak to social issues and even help people to heal.

Scribe put this on display this past April on the Hunger Free Tour 2016 alongside Canadian pop/rock duo Bold As Lions. The month-long tour hit over 20 schools all for the purpose of raising awareness about what World Vision Canada and Hungerfree were doing to eradicate starvation in the world. It also doubled as an invitation for these kids to get involved in the 40 hour Famine. The goal was to encourage youth to find small ways to make a difference.

Soon after Scribe joined Fresh IE and the KMF crew on a trip Cross Lake, Manitoba in the midst of their recent suicide crisis.

We went up to Cross Lake to quite honestly, bring life to a people who have so recently been enveloped in death. Suicide is infectious, and anyone around it is affected by and at times can make a person feel trapped. We wanted to free them from that feeling, even for a weekend. We were able to do concerts, workshops, pray for people, engage in motivation dialogue with the chiefs and elders and play a whole lot of floor hockey. Overall, the trip blessed us more than I feel we ever could have blessed them, but real change starts by people showing up. -Scribe

Similar to reggae and calypso music, rap started out as a tool to bring social change and raise awareness. As FUBU founder, Daymond John, recently noted, rap was Twitter for that generation; it was how you learned about what was going on. Today, with the likes of Kendrick Lamar and J. Cole, there’s a resurgence of storytelling and socially driven lyrics. Scribe is cut from that cloth and he’s just getting started.

So what’s next for the Winnipeg rapper? “Let’s just say Quill & Ink was only a taste of what’s to come. I have found tremendous benefit in taking my time, making beneficial connections with people and organizations that I believe are going to take “Scribe” to a whole new place, that stretches beyond just the music”, Scribe stated.

It’s clear that unlike other artists, for Scribe making great music isn’t the end; it’s a means to an end. What he’s really hungry for is impact, and he’s well on his way to achieving that. Keep shifting, Scribe.