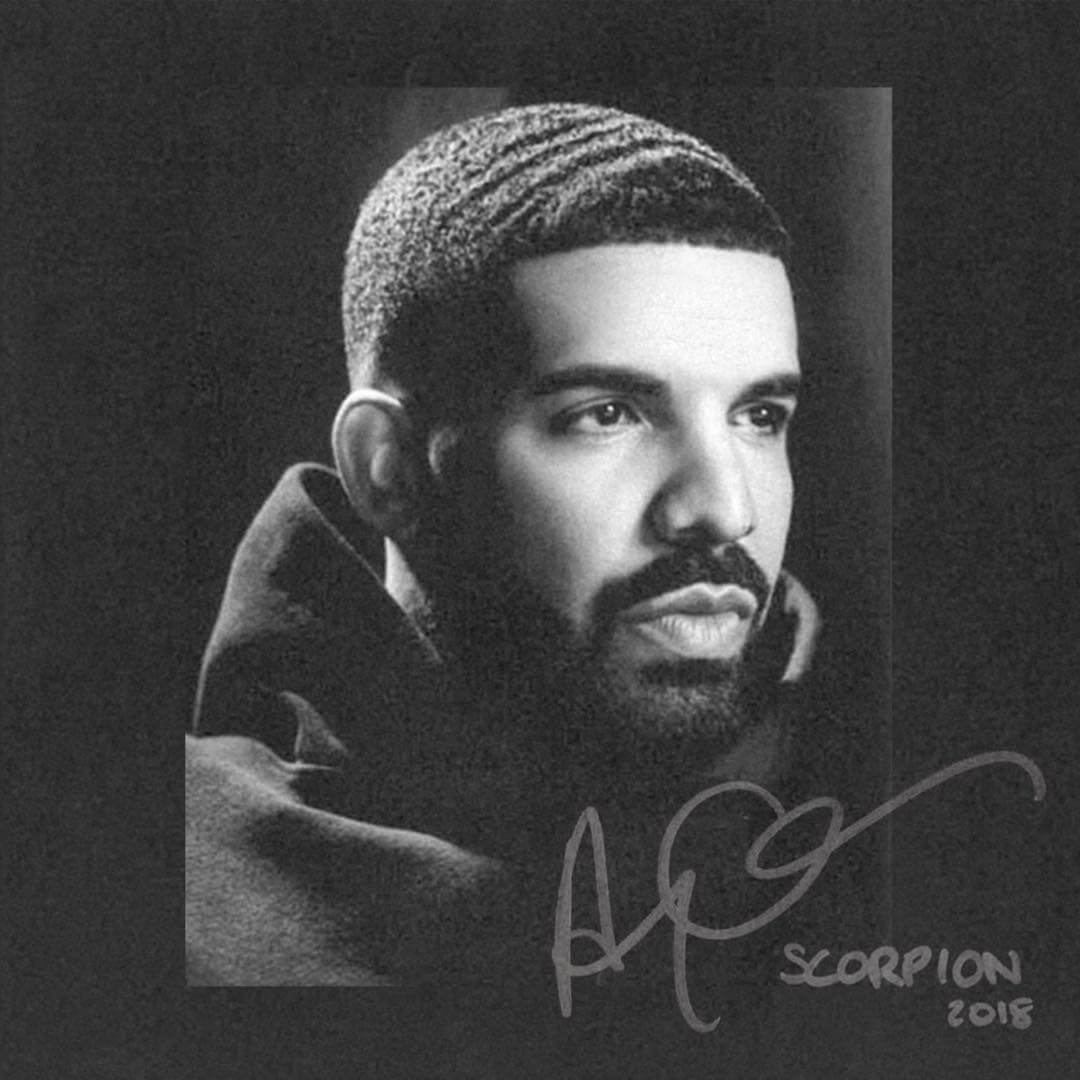 So the long awaited follow up to More Life has arrived and as you’ve probably heard, it’s a double album and Drake admits to having a son. Great. We got that out of the way. Now let’s get to the music. Instead of looking at this double album track by track, let’s look at some of the highlights from each side.

Side A is all about hip-hop and bars. Immediately we hear Survival which is along the lines of Diplomatic Immunity. No hook, just bars. It’s the shortest track on Side A, but it’s the most heavy lyrically. He makes reference to his beefs with Meek Mill and Puff Daddy, but my favourite bar is “You niggas pop mollies, my Mali’s pop niggas”. If you grew up in Toronto or Ottawa you know Somalian people don’t play.

The next track, Nonstop, has some of the best production on Side A. In trying to find a word to describe this beat all I can think of is “dirty”. It was produced by No I.D. and Tay Keith, producer of the Drake and Blocboy JB track Look Alive.

One of the Side A tracks getting early buzz is Emotionless with its sample of Mariah Carey’s Emotion. This track is basically Drake giving his insights into the Pusha T situation and rebutting some of the thing Pusha said in Story of Adidon. “Meetin’ all my heroes like seein’ how magic works. The people I look up to are goin’ from bad to worse. Their actions out of character even when they rehearse…/ Breakin’ speed records on roads that these niggas paved
And they don’t like that, it’s written all on they face”. People like Pusha T that he idolized growing up now see him as competition.

The line that has the internet buzzing is when he says, “I wasn’t hiding my kid from the world / I was hiding the world from my kid.” As a father of three I can respect that. Even when you have 500 followers on Facebook you get protective about showing your new child on social media. Imagine when you’re the biggest artist in the world right now.

He also talks about how out of place he feels as a Canadian working south of the border- “Workin’ in the land of the free, the home of the brave. I gotta bring my brothers or else I feel out of place.”

The other song getting some buzz is Finesse. With the bar, “You and your sister too hot to handle” the internet is assuming he’s talking about the Hadid sisters. Later on in the song people assume he’s either talking about the Hadid sister or Rihanna when he says, “Should I do New York? I can’t decide Fashion week is more your thing than mine.” I can bother with this soap opera talk so let’s move on.

Aside from Nonstop, my other side A favourites are Sandra’s Rose and Talk Up. Similar to Survival, Sandra’s Rose is cut from the same cloth as Diplomatic Immunity, and the best thing about it is it’s produced by DJ Premier. This is why Drake is so successful; he’s a student of hip-hop and respects its history by working with producers like Premier, but then he’ll work with an up and coming producer from the south like Tay Keith who can bring a modern sound. What you end up with is something classic for the older hip-hop head and something with some bounce for the younger hip-hop fan.

Talk Up features Jay-Z, a collab we weren’t expecting to see so soon since they’ve been taking jabs at each other for years. It would be difficult since Jay is on tour with his wife, but this track needs a music video ASAP just because it’s about time we saw Drake and Jay-Z in a video together talking like bosses.

Side A also has two of Drake’s biggest hits of 2018, God’s Plan and I’m Upset. I wasn’t expecting to see God’s Plan on this album since is was on the Scary Hours EP, but it’ll extend the shelf life of the song and it give it a second wind. 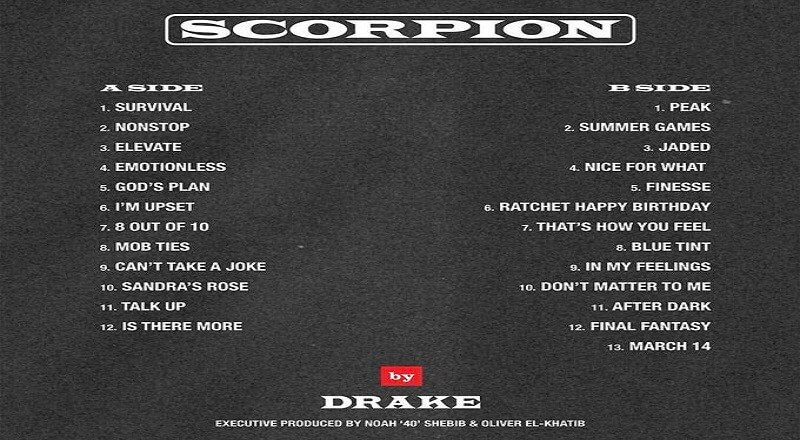 Whereas Side A gave us bars, Side B gives us mostly vocals. To be honest, I don’t really like hearing Drake sing unless he’s “sing rapping”. It was okay for a while, but I’m just done.

What I do like about Side B is how vulnerable Drake is (I know, it probably sounds like a contradiction). It feels like we’re getting to know him more intimately, and more differently, especially as a father.

The song getting the most buzz right now is Finesse because, as mentioned earlier, there are some supposed references to the Hadid sisters or Rihanna.

Aside from Nice For What, which many of us have already butchered to death, the other Side B highlight is the Michael Jackson feature on Don’t Matter to Me. When I first saw this on the track listing I thought it had the potential to be a complete disaster, but Drake pulled it off. I actually love it. It’s one of my favourite songs on the whole album.

The album concludes with Final Fantasy, which has a 4pm in Calabasas vibe to it, and then the most vulnerable track on the whole album, March 14, where he’s completely open about his son.

Right out the gate Drake confirms what Pusha T told the world a month ago. “Yesterday morning was crazy
I had to come to terms with the fact that it’s not a maybe / That shit is in stone, sealed and signed / She not my lover like Billie Jean, but the kid is mine.”

Then we see how disappointed Drake is in himself as he faces his new reality.

“It’s breakin’ my spirit / Single father, I hate when I hear it / I used to challenge my parents on every album / Now I’m embarrassed to tell ’em I ended up as a co-parent / Always promised the family unit / I wanted it to be different because I’ve been through it / But this is the harsh truth now.”

I’m sure for years Drake judged his dad for not being there and he’s the musician who got a girl pregnant, and he’s in the same position. What we end up with is a Drake who is forced to mature and adjust to his new reality, and learn to love someone outside of his bed and his mom.

Scorpion is one of Drake’s best projects in a long time. It’s leaps and bounds ahead of More Life, and better than Views (which I really liked). There are many songs on Side B that I could’ve done without, and will probably never listen to again. Although I loved the Michael Jackson collaboration and the vulnerability on March 14, there was way too much singing for my liking.

Special attention has to be given to the collaborations on this album. The fact that there’s a Jay-Z feature on the hip-hop side of the album and a Michael Jackson feature on the singing side of the album shows Drake’s aspirations as an artist. There’s always been a duality to Drake. He’s gone back and forth between wanting to be mentioned among the greatest MC’s of all time, while also wanting to transcend hip-hop, gaining the mass pop culture appeal and iconic status of Michael Jackson. Both as an MC and a pop icon these are the two men he’s been chasing and he’s making it known publicly on this album.

Overall, I give this album a platinum rating.