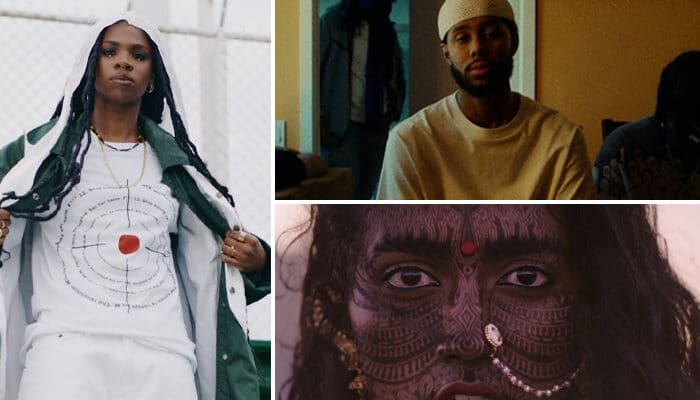 The Academy of Canadian Cinema & Television has announced the Prism Prize top 10 finalists. Here’s a look at the 2022 list.

Today, the Academy of Canadian Cinema & Television revealed the top 10 finalists for the Prism Prize, the annual awards event that recognizes outstanding artistry in music video production. From the list of finalists, the 130 jurors, including more than 130 of the top minds in Canadian music, film, and media arts, will select the Grand Prize winner who will be awarded with a $20,000 prize at a screening and awards presentation on Thursday, July 7, 2022 in Toronto.

The Top 10 finalists are also eligible to win the Audience Award, including a $5,000 prize sponsored by Stingray. To vote for your favourite video, visit prismprize.com.

In the meantime, here’s a closer look at the Prism Prize top 10 finalists in alphabetical order.

After walking away from the 2022 Juno Awards with the trophy for Alternative Album of the Year, Regent Park’s Mustafa finds himself on the list of finalists for the Prism Prize.

Directed by Mustafa himself, the video shows Mustafa in his neighbourhood, sometimes alone and sometimes surrounded by his friends. The video is simple in its execution, but it follows the lead of the song in that it’s both beautiful and sad at the same time. It’s almost like a documentary on inner city life narrated sonically by Mustafa as we see the somber closeups of the people in his neighbourhood. Absolutely beautiful.

This video is all bright colours and sunshine. It’s highly creative and over the top; something you might’ve seen on Much Music back in the 80’s. It also has some comedy in there. The tone is very different from the other videos on the list of finalists and is honestly different than most music videos we see today.

Vote for “Blow Up”

“Closer” directed by Anjali Nayar is so beautiful and cinematic. I would watch this over and over again because of how spectacular it is.

Nayar made her feature directorial debut at Hot Docs back in 2016 with her film Gun Runners, then premiered her feature film Silas at TIFF in 2017, showing why this video is so cinematic. There’s also a strong storyline that’s easy to follow. Take a look at this video and you will see why this video made the list.

Directed by Debby Friday herself along with Ryan Ermacora, this video for “Focus” both cinematic and trippy. It also has some nice mountain landscapes and a lot of movement and glitch effects so beware.

I hate to use this word again, but this video falls into the category of “cinematic”. The tone is sad and somber, and everything about this is well-executed.

According director Anne Douris, this video was inspired by those old National Film Board cartoons and we can see it. This video really does bring you back to your childhood.

“This is a story about growing up lonely”, she mentioned in a press release when this video dropped. “In particular, it’s about how wage labour – the business of having to work to survive – shapes our lives from the moment we are born. I think we mistake childhood as being a time of ‘freedom’ when actually our lives are entangled in the struggle of working adults.”

This video is one of the more creative videos on the list. The director used a style that we really don’t see much anymore and it paid off.

BADBADNOTGOOD has two videos among the top 10 finalists. The first one is for Love Proceeding, shot in what looks like Regent Park or some other downtown Toronto neighbourhood; not what you would expect from a non-Black jazz band.

This video proves the statement “less is more”. It’s a simple Black and white video that shows inner city life in downtown Toronto.

Fresh off of winning Best Rap Album/EP for her project Stock Exchange at the 2022 Juno Awards, the first female artist to ever do it, Haviah Mighty is once again a finalist for the Prism Prize. She previously won the prize in 2021 for the Theo Kapidistrias directed and animated video for “Thirteen”.

This year she teamed up with Kit Weyman and Chrris Lowe for the video for “Protest”. The video features some dope styling/wardrobe and locations, including a Black beauty supply store. It also features a cool scene as a gun goes off to start a race only to have the gun turn on the Black runners. Fire.

There’s so much to love about this animated video from Chad VanGaalen. It’s fun and tells a story. It’s probably the most creative video on the list of Prism finalists.

According to Chad VanGaalen, the video is set in the world of “Thrift Drifters”. In a time when a lot of artists follow trends with their videos, he’s obviously taken so much time developing this concept which is greatly appreciated.

The second of BADBADNOTGOOD’s Prism Prize finalist videos is for Timid, Intimidating directed by Winston Hacking. It features card board cut outs producing a vintage, collage-like effect. Hacking has to be praised for his creativity.

The Prism Prize will be awarded Thursday, July 7, 2022 in Toronto.