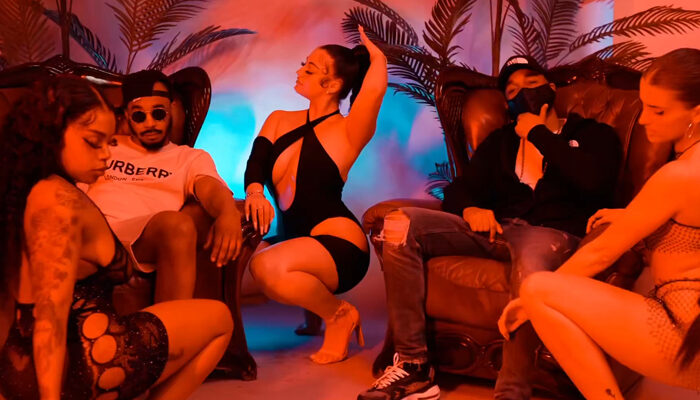 One of the most emotional moments throughout the first three seasons of the Netflix series Top Boy has to be when Sully takes his friend Dris up to the rooftop to kill him after he finds out he sold him and Dushane out.

The man behind the role is none other than British actor Shone Romulus. While fans may have missed his portrayal of the complicated character in the latest season, they’ll be happy to know the serial entrepreneur has remained active since leaving the show.

He has kept busy with his streetwear brand Dapazilla, launched this year. He’s also a chef with Island Grub, cooking up Caribbean meals like rice and peas with crab claws, and callaloo. His previous ventures included a beverage company called Island Passion with a line of passion punches infused with exotic fruits and flavours, as well as the Cakes&Cognac podcast.

But what many fans may not know about him, especially here in Canada, is that he’s also an artist. Romulus recently appeared alongside fellow UK-based artist UKFRENCH on his latest single “Shake It”, a song about going out and having a good time. According to the 74ent.tv CEO, that was all by design.

“We wanted to make a song that people can dance to and have a good time with their friends”, UKFRENCH explains. “A lot artists are talking about drilling and trapping right now. We wanted to do something different.”

With his flow, tone and bilingual tracks, UKFRENCH is definitely an artist Canadians should look out for, especially in Quebec. Aside from his relentless drive and confidence, what makes UKFRENCH standout is his unique story as a French rapper based in the UK. Born and raised in France to Angolan and Guadeloupean parents, he started his music career there before moving to England.

In recent years, he’s dropped singles like “Involved” and “Fuego” before his latest release “Shake It”.

The single comes with a music video directed by Chozn Media who he worked with previously on the visuals for “A.D.A”. The video features a little alcohol and a lot of beautiful women shaking it as the duo have a good time.

“Shake It” is available on all major streaming platforms. To check out the video, tap the header image above.