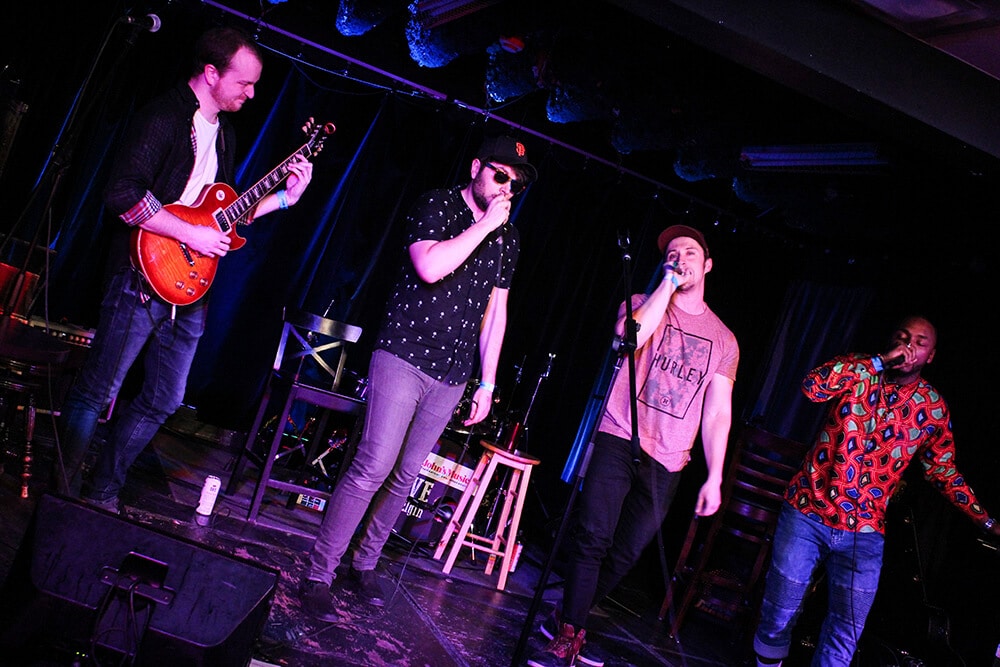 Ottawa group Wotts recently hosted a live show at Live On Elgin, bringing some notable local acts along for the ride, including Hevve, Eddie Quotez, and Toronto-native Vibebymelo.

The show started with rapper Eddie Quotez who performed tracks from his 2017 album Otaku as well as some of his older material. He came right out the gate with the upbeat break up song All Night, before moving on to one of his more popular songs, Kush and Anime. He struggled a bit with his flow and delivery on this one, but rebounded well, going into the archives to perform Sleep, a song about how he’s being slept on in his own city (something a lot of artists in the capital can relate to).

Quotez then got personal in talking about his bout with depression before performing Up. It’s this vulnerability that makes it so easy to appreciate him as an artist despite the flaws that sometimes reveal themselves (like forgetting lyrics). Whether he was talking about his depression or revealing, “I’m a little gassy. I just chugged down a beer”, his authenticity is refreshing and makes him so relatable and likable. He really knows who he is as an artist and plays the “awkward, nerd” very well. He’s also a funny guy and can easily double as a stand up comedian or personality.

Just before his final song of the night he performed Untouchable, a song dedicated to MC Hammer who first made him fall in love with hip-hop. This is where Eddie Quotez showed what he’s capable of. The beat was hard and fit his voice like a glove. Quotez even looked different on stage. Whereas earlier he had looked a little uneasy on stage, now he looked confident, even a little angry. His lips curled up a bit, he sounded self-assured, and his flow and delivery were on point. The crowd knew something was different. What we were seeing was a glimpse of the Eddie Quotez from a few years back.

Second to hit the stage was Vibebymelo who has been developing a reputation as a top shelf live performer. When people talk about him as a performer it’s usually with a look of awe on their face. Well, Vibebymelo is just as advertised. He started out his performance with a slow jazz song, almost a balad. I thought to myself, “Is this the same guy I’ve been hearing about?” Yes, it was. On the next song he gave us some bars; some Joyner Lucas, rapid fire bars to be exact. By the time he hit the third song in his set I was convinced he was one of the best live performer I’d ever seen. Period. Looking around the room you saw that look of awe seen on other people’s faces when talking about Vibebymelo. He’s a little Chance the Rapper meets Childish Gambino meets Anderson.Paak. Simply put, he’s a star.

Next to hit the stage were the headliners, Wotts, who I knew absolutely nothing about. Made up of rappers JM and Lex, beatboxer MCDIMZ and last minute replacement Jacob on guitar, they had a very unique sound. While group member MC Dimz refers to their sound as “Beastie Boys, Fat Boys and Pink Floyd in a gumbo”, you wouldn’t be wrong if you thought they sounded a bit like a harder, rap version of the Pentatonix. It’s really hard to define their style and sound. They have their own lane. They really don’t sound like anyone else we’ve heard before. Incorporating beatboxing as a part of your sound can either come off as cheesy or original depending on how well it’s executed. Wotts pulled it off well.

They opened with 508, then took us back to 2014 with Ballin’, before performing Sentinels off their new album Rivver. One of the highlights of their set was The Drill. The guitar laced beat sounded a lot like something you’d expect from fellow Ottawa hip-hop group Flight Distance (RIP Bender) and was a perfect compliment their voices and flows. We were treated to some of the same formula on Cloanwars, Bombeh and Musings 2 before they closed with Tryna Find Balance that had a bit of a Reggae vibe.

Overall, Wotts are a good act. They’ve found their own lane and style, and they have material that can cater to different audiences. If you want either classic hip-hop, chill upbeat tunes or the new dark underground sound, Wotts has something for you.

Last to hit the stage was Gatineau artist Hevve. This set was different from previous Hevve performances as this was his first time performing with live instruments. Well, one live instrument to be exact. He was accompanied by fellow SND TRK member Timal Garnier on drums who would eventually comes from behind the drums to join Hevve on a few tracks.

He started out his set with some of his down tempo tracks before going into Savag3s, the lead single off his new project V, and On It featuring fellow local artist Jeff Sanon. This is the second time we’ve seen Hevve perform this track live but unfortunately neither performance included Sanon. We’re still waiting for the day we get to see these two share the same stage.

He closed with Lego also off of V, at least that’s what he told us. We ended up getting one more song—Fucci, which is in desperate need of a music video.

As usual, what you get from Hevve is a solid performance. Having a live drummer was a nice extra touch and hopefully a step closer to a full band.

Overall, the four acts were a good compliment to each other. They each offered us something different, yet the whole show felt cohesive and well curated.