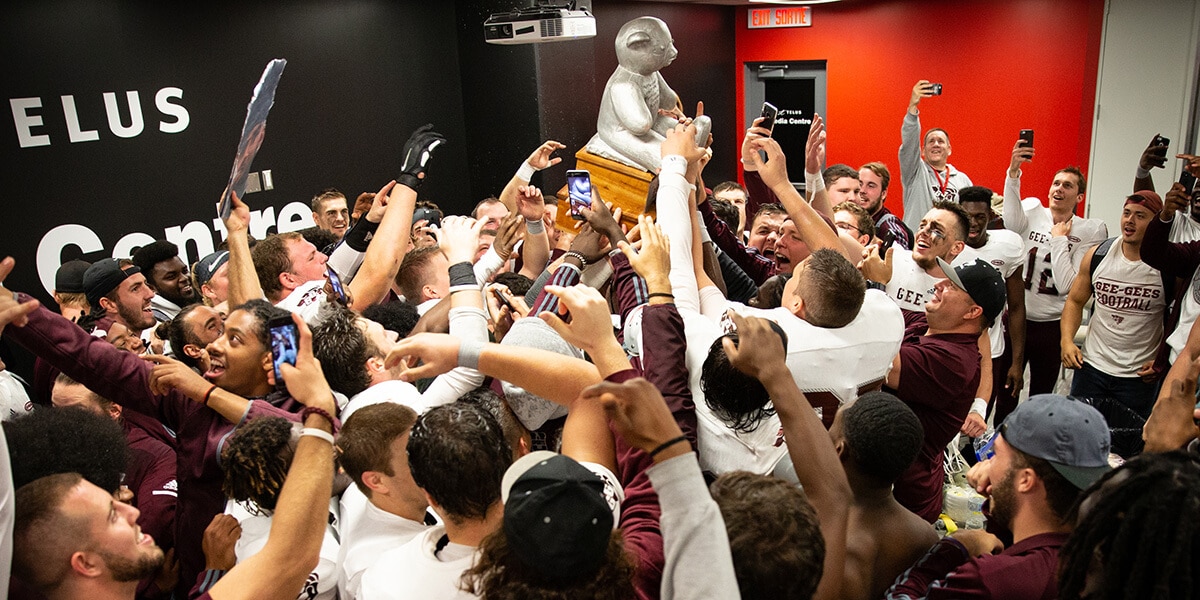 Last Saturday I found myself at midfield in TD Place with hundreds of students from the University of Ottawa. I did what I could to capture the incredible moments following The U of Ottawa Gee Gees’ 38 – 27 victory over the Carleton Ravens in the 50th Edition of the famed Panda Game.

As the final whistle blew, Gee Gees fans stormed the field to party as it marked the first Panda Game victory in 5 games for U of Ottawa. It was also the first win since the iconic 2014 ‘Hail Mary’ Panda Game when the Ravens shocked the Gee Gees with a last second touchdown to win.

On Saturday the Gee Gees finally got some retribution back after being owned for 4 years by their cross town rival.

The Raven’s offense started the game with some fireworks using a double pass trick play to score 32 seconds into the game. But after the score was 14-7 in favour of Ravens mid second quarter, the Gee Gees went off and scored 31 unanswered points. Gee Gees quarterback Sawyer Buettner threw for 5 TD’s and was named the game’s most outstanding offensive  player.

Carleton would score 2 late touchdowns to make the game interesting, but Gee Gee’s All-Canadian defensive back and the eventual defensive player of the game Jamie Harry intercepted a pass from Ravens quarterback Michael Arruda with less than a minute to play in regulation. Harry’s interception would be his 2nd for the day, as his first came in the 3rd quarter just when the Ravens were building momentum for a score.

“It feels great!”, said Harry, who is considered the 17 best overall prospect in next year’s CFL draft. “This is for all the alumni and their teammates. We lost the last 4, but we came back and we shut it down!”

Arruda would finish with 4 interceptions, but gave credit to the Gee Gees defense after the game. “They did a hell of a job and we weren’t expecting it. I caught myself looking down at the D-line a little too much and it was hard to adjust. We made way too many mistakes and hurt ourselves way too many times, but [the Gee Gees] played great.”

The atmosphere was electric, and seemed more like a something I’ve watched on ESPN. Both teams ranked in the U SPORTS Top 10 pool nationally, with the prestigious Pedro the Panda Trophy up for grabs. I only came to know about the Panda Game’s significance this past spring from Shifter CEO Kevin Bourne during a visit to Ottawa. I vowed to travel back to cover the game and see what all the hype was about.

6 hours and 25,000 fans later, I can say the hype is real. Each school packed out the TD Place Stadium on their respective sides. The Northside for the Gee Gees fans and Southside for the Ravens (The whole Northside/Southside storyline at TD Place holds a significant historical reference regarding social and economic class within the Ottawa region, but that’s a whole other story for another time).

I’ve been a grass roots football guy my whole life, but somehow never had the opportunity to attend a Canadian intercollegiate sporting event. I couldn’t have picked a better game to attend. Being from Toronto, all things relating to sports in Canada usually comes after we’ve given our attention to North American sports pop culture, and don’t have the will or attention span to really take notice of the unique sports experience we have up here in the Great White North.

This year’s Panda Game set a new attendance record crowd of 24,470, breaking last year’s modern-era Panda Game attendance record of 24,420. The event continues to draw the highest regular-season crowds in University sports, with the only larger crowd on record coming back in 1950.

Harry’s interception to close out the game ignited a chain reaction from the Gee Gees sideline, to the fans running to the field, back into the Gee Gees locker room for the trophy presentation. I was there in the middle of it all and can now say that the passion and pageantry of University athletics is alive in Canada.

I don’t know how, but the OUA needs to bottle up the Panda Game experience and recreate it across other University campuses in the Ontario and Canada. We don’t have to imitate US college football culture. We have our own identity here in Canada when it comes to collegiate sports. The 50th Panda Game was just that. A microcosm of what grassroots athletics could look like across the country in the near future.