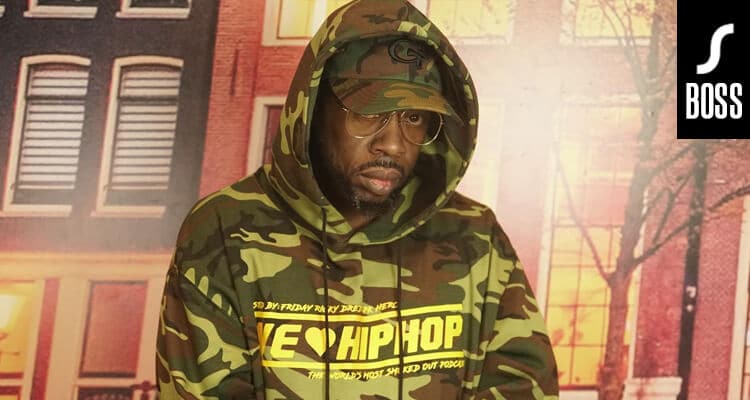 Unless you’ve been living under a rock, you know that Toronto is having a moment right now when it comes to hip-hop and R&B. No, I’m not talking about Drake, The Weeknd and Tory Lanez. I’m talking about names like Top 5, Duvy, Pressa, LocoCity, Lil Berete and a long list of other young artists coming up in the city.

Toronto has come a long way since the 90’s when young audiences would barely bat an eye when a local rapper dropped a new project or single. Fueled by the success of Drake, the undisputed #1 artist in the world, Toronto has learned to love and accept itself and the world is now taking notice. One of the catalysts for taking Toronto culture to the world is Jamaican-American Hip-hop media personality, DJ Akademiks, who has been featuring Toronto rappers on his Twitch and Instagram Live platforms.

Locally, one of the men documenting and fueling the movement in his own right is content creator and entrepreneur, Friday aka Ricky Dred, the man behind the We Love Hip Hop Network. In just a few years, We Love Hip Hop has become one of the premiere media outlets documenting the rise of Toronto and Canadian hip-hop, interviewing big Toronto names like Bizz Loc, Rich Kidd, and Pressa.

But despite his growing success, his journey has been a story of ups and down, and ups again, worthy of a Hollywood movie.

His story begins in the Montreal suburb of Brossard. Born to a Bajan mother and a Ghanian father, Dred grew up in a pretty good neighbourhood on the south shore. His mother, a nurse and single mother, made ends meet, eventually putting a down payment on a house which she would soon pay off. In hindsight, this example of hustle and determination would help shape the future media personality and entrepreneur.

”My mom was the perfect example of how to do things if you push. If you put the work in, you’ll get whatever you want”, he explains.

Although his mother and aunts afforded him a good life, they were still the poorest and only Black family on the block. Noticing he didn’t have the things other kids in the neighbourhood had, he eventually found other ways to get what he wanted.

“From 15 years old, I was already stealing everything that wasn’t chained down”, he told SHIFTER. “From 17, I got my first experience with saying, ‘I’m gonna try being a drug dealer’. So even though I wasn’t in a household where there was a lot of hood stuff all over the place, because I wasn’t able to have the same amount of things everybody else had, I went the fast route.”

But this hustle and determination to get ahead would eventually serve him well in other area–rapping. Beginning in the early 90’s, Friday would start a decades long career as an artist that would see him release countless albums, singles and music videos (some of which are still in the stash).

He was introduced to emceeing through his family’s frequent trips to New York to visit extended family. With only a six hour drive between Montreal and the Big Apple, his mom would take him to New York four times a year, as soon as school broke. Being in the hip-hop mecca allowed him to soak up all that culture, but it was only after a chance encounter with a New York cab driver that he decided to start putting pen to paper and writing rhymes.

“The first time I decided to be a rapper I was in the Bronx with my cousins”, he explains. “I’m in a cab with him and we were talking about some girls and the cab driver tells me, ‘Yo, you wanna get a girl? You tell them, “Hey beautiful girl of my complexion. Take a look in my direction”’ and we were like, ‘Ohhhhhh!’ and I went back to my cousin’s crib and I started rapping.”

But after decades in the game, his life would take an interesting turn. In February 2010, he was arrested after almost losing his life in a house fire.

“I got busted because there was a fire in my house that was happening and I was too drunk to wake up and put it out, so when the firemen and police came and saved me they found cocaine on the counter…”, he recalls.

They later found a loaded 45 caliber gun on his computer tower.

After being released on bail, the police were back at his door two months later because he was “drunk and sloppy”.

After realizing he wasn’t going to get out on bail this time around and was facing over three years in prison, he decided it was time for a change.

“That’s when I turned the corner in my brain; when I was sitting on range and it was like, ‘Oh, I’m not gonna get bail. I’m gonna have to sit here for a while. I might be facing three years and change’”, he recalls. “That’s when my brain started to say, ‘I might have to start making better decisions’. And that’s when I stopped drinking.”

Check out our in-depth interview with Friday aka Ricky Dred.

After his release, he went back to what he knew and continued his rap career which can be broken into two parts–before sobriety and after sobriety.

“I spent multiple years as a rapper being a drunk crazy person…I got my shit on when I was sober too. This is why I relate to a lot of the people I interview. I was a gangster rapper too. I rapped about how much drugs I used to sell. I rapped about how much guns I used to be around; how many times I’ve been in fucked up incidents. I rapped my life. So when I got sober in 2010 and came home from jail in 2011, and I started getting back into rapping. The Sober MC part was just the blog, but I really became a sober MC because I was gonna start doing this rapping without drinking. Before I used to go in the booth twisted, or stay up all night in front of my computer drinking and record until four o’clock in the morning drunk off my ass. So the sober MC part was post-jail. Can I still get in the studio, be creative, without having the crutch of drinking? So from 2021 to 2014, I created about three projects completely sober, no drinking and no weed neither.”

In 2014, he would hang it up as an MC, but those years in the trenches as a rapper would serve him well in his next venture–podcaster.

“I used to work at [Shoppers Drug Mart] head office. When I first got home from jail, I was on parole and I slipped through the cracks and got in there and excelled. But during the times I’m in front of my laptop I’m crunching podcasts. So while I’m rapping, getting really heavy on Twitter and Facebook, really talking my shit, at the same time always giving my opinions, somebody jumped in the comments one day and said, ‘You should start a podcast’ and I responded, “Okay”.

A week later, the We Love Hip hop podcast was born.

On episode, one they talked about the Remy Ma-Nicki Minaj beef and Shether. Three episodes in they had Toronto hip-hop vet Rich Kid. Then on episode four they had T-major who made the instrumental listeners hear on the podcast intro every week.

“I just wanted to make a podcast and talk shit”, he explains. “It evolved to this, and I’m with anything that’s evolving in a positive direction for our country, so I’mma lean in…With anything I do, I’m psycho so I’m gonna overdo it, so I was like, ‘Let’s do it again next week’”.

But it wasn’t until episode 47, when they interviewed the Errr God himself, Bizz Loc, that the show began to gain steam. Since then they haven’t looked back.

“Joe Budden, he’s a big influence of mine…I was listening to Joe Budden podcasts before we started ours. They started two years before us. I was like, ‘He looks like he’s having a great old time!’ So from the first few months into the podcast, I was like, ‘I don’t feel like releasing this new music that I recorded over the last few months’, and I just focused fully on making content and I feel it was the best decision I ever made.”

Although there are many content creators in Canada and the world today, perhaps his greatest role is bridge builder. He’s both African and Caribbean. He has lived in both of Canada’s major English and French cultural centres of Toronto and Montreal. He’s been on both sides of the microphone as both an artist and media personality. He’s an OG who has made many of the mistakes young Canadians are making today, and paid the price for it. He’s also a man who looks out for others, something he learned from his now late mother.

“I wanna be known for someone who put on a lot of people; that gave them the allyoop…I wanna be considered the fuckin’ GOAT. I wanna be considered one of the greatest fuckin’ interviewers, content creators of all time. I wanna surpass the people I look up to, like the VladTVs and the Charlamagnes and the Sways. No disrespect to their legacies, but when you talk about those guys, I want Friday Ricky Dred to come up. I wanna be put in those conversations.”

But his big, global aspirations don’t just stop at himself. Despite Toronto’s current successes, he sees even more coming for the city in the very near future.

“It’s going to be the version of Atlanta it wants to be. It’s gonna be the place to get new artists, and a lot of people’s lives are gonna be changed where there’s gonna be a lot more millionaires that are floating around here off of making music. And we’re not gonna get it from our own. We’ll have our fanbases, but I’m talking about the accolades.”

Catch new episodes of We Love Hip Hop every Thursday Morning at 7 am.