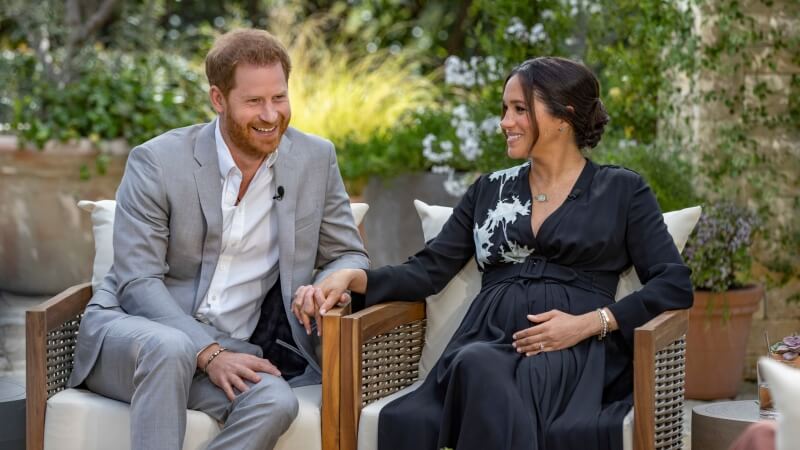 5 TAKEAWAYS FROM THE MEGHAN MARKLE AND PRINCE HARRY INTERVIEW

Meghan Markle and Prince Harry sat down with Oprah Winfrey for their first joint interview since stepping down as senior royals last year. In the explosive two-hour tell-all, no topic was off-limits, and the couple spilled all the tea about their split from the royal family.

Below, we recap five key takeaways from the Meghan Markle and Prince Harry interview which aired on Sunday night.

1. Meghan had suicidal thoughts and the palace prevented her from getting professional help

“It was all happening just because I was breathing,” Meghan said. “I just didn’t want to be alive anymore. That was a clear, real, frightening and constant thought.”

She went to “one of the most senior people to get help” and was told seeking professional help outside of the palace wasn’t an option because “it wouldn’t be good for the institution.” She also went to the palace’s HR but was told “there is nothing we can do to protect you because you are not a paid employee of the institution.”

2. Meghan and Harry were already married before their royal wedding

Meghan revealed that the couple secretly got married in their backyard three days ahead of their televised nuptials in May 2018. She said the two of them exchanged vows in a private ceremony performed by the Archbishop of Canterbury.

“Three days before our wedding, we got married,” said the Duchess of Sussex. “We called the Archbishop and we just said, ‘Look, this thing, this spectacle is for the world, but we want our union between us.’”

Meghan told Oprah that while she was pregnant with Archie there were “concerns and conversations about how dark his skin might be when he’s born.”

“That was relayed to me from Harry. Those were conversations that family had with him,” she said.

Both Meghan and Harry declined to name the royal family member who expressed those concerns about their son’s skin tone. “That would be very damaging to them,” Meghan added.

“That conversation, I’m never going to share,” said Harry. “But at the time, it was awkward, I was a bit shocked.”

Meghan also revealed that Archie was denied a royal title, which would have automatically granted him security. She explained that although she didn’t care about the title itself, “it was important because it affected his safety.”

4. Kate Middleton made Meghan cry days before her wedding

When asked about British tabloid reports that she made Kate Middleton cry, Meghan revealed it was actually the other way around. “The reverse happened,” she said.

“A few days before the wedding, she was upset about something – yes, the issue was correct, about the flower girl dresses – and it made me cry and it really hurt my feelings, and I thought in the context of everything else that was going on in those days leading to the wedding, it didn’t make sense to not be just doing whatever everyone else is doing, which was trying to be supportive knowing what was going on with my dad and whatnot.”

During the interview, the couple confirmed that they are expecting a girl in the summertime and that they don’t plan to have any more children.

REVIEW – BIGGIE THE RAP SUPERSTAR GIVES WAY TO CHRISTOPHER THE MAN IN BIGGIE: I GOT A STORY TO TELL