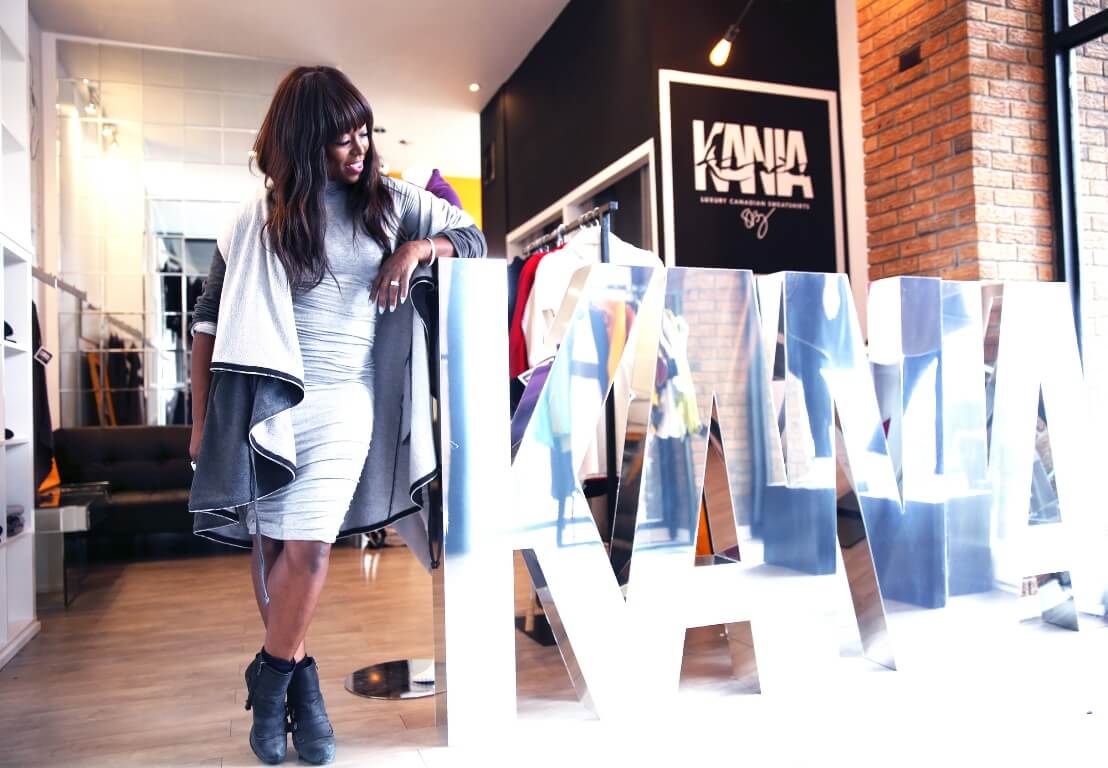 It’s not often that big fashion news comes out of Canada’s capital, but last week there was a major win for Ottawa and Canadian fashion. Long time designer, Stacey Bafi-Yeboa, founder of luxury sweatshirt company KANIA, was invited to show at New York Fashion Week. For Bafi-Yeboa this step was years in the making and she’s embracing the challenge.

Stacey is no stranger to the limelight. Before fashion, her first love was dance. At 19 years old her talents took her to New York where she danced on Broadway. It was during this time in the Big Apple that her vision for her place in fashion was born.

“I lived in New York City and I remember one time after my dancing career, I stood on a rooftop in New York and I looked out at the city lights, and I wrote a letter to New York, and I said, ‘Thank you for having me as a performer. Thank you for having me as an entertainer. But this is not my purpose’. I knew that my purpose was bigger and my purpose is to make people feel amazing. My purpose is to make women feel alive and empowered. No matter what your body is, no matter what you look like,” Bafi-Yeboa stated when announcing the big news.

She returned to Canada, working on film and television projects in Toronto, but her vision for making women feel comfortable never left her. She bought her first serger and only a month after designing her first line, a yoga studio decided to carry it. It would be called KANIA.

“KANIA is a luxury sweatshirt line. We make really, really comfortable clothes that blend fashion with comfort. I want women to feel amazing. I want them to feel absolutely great when they’re wearing their clothes so they can feel great doing whatever they’re doing,” Stacey says of her brand.

Stacey moved back to Ottawa where KANIA became a family affair based out of her childhood bedroom. Stacey sewed the pieces while her father cut the fabric, her mother sewed the labels, and her boyfriend at the time (now husband) folded and did quality control.

But it was exactly 10 years ago, after working on film and TV commercial projects for the likes of Nike, Leon’s and Hairspray, that she decided to dedicate one hundred percent of her time to KANIA.

Over the following 10 years, Stacey and KANIA would hit some major milestones- moving from her childhood bedroom to a flagship boutique in downtown Ottawa, as well as a few music festival collaborations, a showing at World MasterCard Fashion Week in Toronto and a memorable Carnival themed showing at the now defunct Ottawa Fashion Week.

All of this leads to this fall and the biggest showing of her career thus far, New York Fashion Week.

Although Stacey, with the help of KANIA technical designer Arfie Lalani, has learned to pull together collections at the drop of a hat, she recognizes that she can’t do it alone.

“I’ve accepted this great honour but I can’t do it alone. There’s a lot of funding that needs to be done and I need the people power to make the show of my dreams. I’d love to make a show that blends my fashion design career and my dance career together. I want to make ‘Broadway down the runway’. I want to make the show of a lifetime…This is Canada’s 150th birthday and I want to go into America and show Canada proud.”