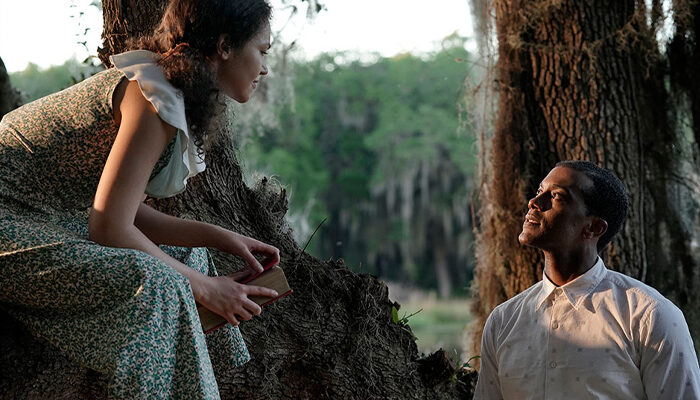 Based on a script he wrote 27 years ago, Tyler Perry’s latest film is his “best work yet” says SHIFTER’s Kevin Bourne in his A Jazzman’s Blues review.

Known for delivering Black comedies like Madea, Tyler Perry takes audiences in a different direction with his latest film A Jazzman’s Blues; a coming-of-age period drama about young, forbidden love in the late 1930’s and 1940’s South

The shy and starry-eyed Bayou (Joshua Boone) finds himself in love with Leanne (Solea Pfieffer), a light skinned Black girl facing trouble at home. After being separated, the two young lovers reconnect in Hopewell, Georgia, but under completely different circumstances. The two are separated again when Bayou is forced to flee amidst rising racial tensions in town (think Emmitt Till). His love for Leanne is only matched by his love for his mother, played by Amirah Vann (How To Get Away With Murder). While Bayou finds a new life, and fame, as a jazz singer in Chicago, trouble ensues when he returns to Hopewell to help Leanne escape her husband and to help rescue his mother’s speakeasy business with a not so secret live performance.

The film is rich in southern Black culture, including the soundtrack which features a lot of blues and jazz, and dance sequences at the family speakeasy. It also depicts alarming aspects of the Black experience in the 30’s and 40’s, including lynchings and mulatto women needing to pass as white in order to get by.

While Tyler Perry is known for over-the-top drama in his TV shows, A Jazzman’s Blues, which draws strong comparisons to The Notebook, delivers the kind of drama that pulls at your heart strings and immerses you into the story. Many Black viewers will see elements of their own family history, told around the dining table, in this film.

While Solea Pfieffer’s portrayal of Leanne may at times appear to be whimsical, airy and aloof, and Boone’s portrayal of Bayou appeared naive, the two are playing teenaged characters much younger than themselves early on in the film. By the end of the film the two actors do a good job of depicting the growth and maturity of their characters as they transition into the realities of adulthood. Also delivering a quality performance is Austin Scott (Sistas) as Bayou’s jealous and drug-addicted older brother, Willie Earl.

In the closing scenes, Boone and Pfieffer are spectacular as they deliver heart-wrenching performances that may leave viewers tempted to shed a tear as the film is brought to a climax and their love faces its ultimate test. This is one of the most beautiful depictions of Black love we’ve seen on the big in recent memory.

Perry, who receives a lot of criticism for his work, should also be commended for his directing on this film. While his abilities as a director and filmmaker are sometimes lost in his comedic films, this film is a reminder of why he’s one of the more successful directors and producers today. A Jazzman’s Blues is simply his best work yet.

A Jazzman’s Blues is set for release on September 23, 2022 on Netflix.

THE WOMAN KING IS AN INSTANT OSCAR CONTENDER | TIFF 2022