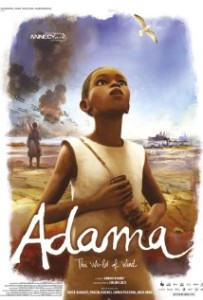 Written and directed by Simon Rouby

“Adama is 12 year old hero who travels through a war-torn Europe in order to find his older brother Samba. Having never left the peaceful West African village he has lived in his whole life, Adama gets to explore the ‘Outside world’ for the very first time. He soon finds out that it might not be what he has expected.”

The Ottawa International Animation Festival offered us many different masterpieces. Among them stood Adama, an independent film written and directed by the talented Simon Rouby. Adama tells the story of a 12 year old boy who is forced to face the horrors of war in order to save his older brother. Throughout the film Adama encounters many people and goes through many challenges that will eventually change his life forever.

This movie is Simon Rouby’s very first feature length effort, which is quite impressive since Adama is audacious and daring. Indeed, Rouby reveals some of the most horrific and violent truths about humanity. At the same time he manages to illustrate the many ways in which our society has become desensitized to certain realities. The directing of Adama is simply phenomenal. Rouby applied an old school type of animation to his film, combining a series of still images with a magnificent soundtrack and creating innovative visuals. This style of animation has seldom been used since the 1990s, which also brings out nostalgic feelings to any fan of the animated genre.

Overall, Adama is a drama and is not for the lighthearted. It covers many dark subjects and is not for every type of audience. When you watch this film, you’re not only sad because of the things Adama goes through; you are also deeply affected by the things he sees. Rouby forces us to look at those things and allows us to observe our own ways from an innocent perspective.

Adama is a heartfelt tribute to humanity as well as a reminder of what we can be and all that we can accomplish. It is an emotional journey- an innocent but honest adventure. It is very well paced and very well put together. Because of that, we have no choice but to give it the score that it deserves. That being said, I strongly recommend it to anyone who has the chance to see it.