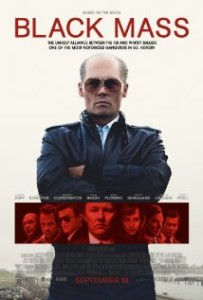 “Black Mass follows the adult life of notorious South Boston gangster James ‘Whitey’ Bulger, his incredible rise to power in the criminal underworld of Boston and his eventual fall from grace.”

Black Mass sees a return to form for the Academy Award winning actor, Johnny Depp. After years of mediocre to absolutely abysmal performances, Depp shines as the ruthless and notorious gangster, physically transforming and embodying the character. Supported by an outstanding cast and a chilling soundtrack, Depp carries the lacklustre story of Black Mass and turns it into an Oscar contender.

Johnny Depp is Whitey Bulger. Depp commands this film with a presence that we have never seen from him before, becoming a menacing villain protagonist. The performance is subtle when it needs to be, outgoing and loud at other times, but consistently stays downright terrifying for the entire film. But Depp doesn’t carry this film alone. Although he is the lead actor in this film, the supporting cast is great, if not actually better than Depp himself. From Joel Edgerton, to Benedict Cumberbatch, to Dakota Johnson, Black Mass is stacked full of incredible actors who put on incredible performances. Edgerton stands out especially above the rest, portraying Whitey’s childhood friend and corrupt FBI agent. His performance is not one that immediately stands out; instead it is subtle and nuanced as you follow his progression to becoming more and more corrupt as the film goes on.

Other notable performances include Cumberbatch, playing Whitey’s younger Senator brother, Billy, and Johnson, playing his girlfriend Lindsey. These roles are somewhat limited, but one of the standouts was both of their convincing Boston accents. They were not over the top like Affleck’s in The Town but were kind of just there, playing it natural as if they have spoken with it their entire lives.

However, despite the Oscar-level acting in the film, Black Mass suffers from a rather by-the-numbers plot and story progression. Unfortunately, without Depp and Edgerton, this film would be an unforgettable one with one too many time skips and location changes. That’s not to say the story is particularly bad, but rather it’s not anything revolutionary.

One thing worth mentioning quickly is the soundtrack. Much like the performances in this film, the soundtrack is not over the top and doesn’t immediately present itself as a standout, but instead is subtle and exists only to serve the story and scenes. And it does its job perfectly. The soundtrack in Black Mass increases the viewing experience overall amplifying the actions being played out on screen.

Overall, Black Mass is a film that is very much carried by its performances, with some support from the soundtrack. It sees a breakout performance from Edgerton and a return to form for Depp, but is ultimately hindered by its standard rags to riches crime story.