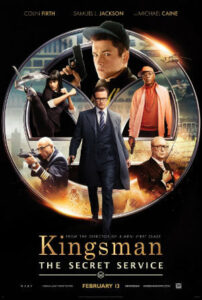 Kingsman: The Secret Service, starring Colin Firth (Galahad) and Taron Egerton (Eggsy), is a cross between a James Bond-like spy film, with a supervillain and smooth British spies in tailored suits, and Kill Bill with graphic yet well-choreographed fight scenes.

The story is centered around a relationship between master (Firth) and pupil (Egerton) à la Karate Kid. Galahad seeks to change his young protégé’s life by helping him evolve from a punk kid fighting off neighbourhood bullies in inner city London, to putting his intellect and survival skills to use as a spy.

Taron Egerton, a newcomer to the world of big blockbusters, is a perfect on-screen compliment to Hollywood vet Colin Firth. From beginning to end his acting is on point and is believable in his portrayal of this rags to riches character.

Although the film explores themes of teamwork, sacrifice and bullying, there’s nothing profound to take away from the film. Nevertheless, the story and characters are intriguing and the filmmaking and graphics are exceptional.

If you’re squeamish about violence, coarse language and mild sexuality this may not be the film for you. But if you’re not easily offended and appreciate British culture and humour, you’ll enjoy this modern take on the British spy film.

Overall, Kingsman is a highly entertaining film with fascinating characters and non-stop action from beginning to end. Looking forward to part two and seeing how Eggsy evolves into a more mature spy.

Kevin Bourne is co-founder and Managing Editor, Web and Social Media of SHIFTER Magazine. Born and raised in Toronto, Kevin currently resides in Ottawa with his wife and two children. Before SHIFTER he worked in communications in the Parliament of Canada and has experience in video production, photography, graphic design and writing.

*”Kingsman The Secret Service poster” by Source. Licensed under Fair use via Wikipedia