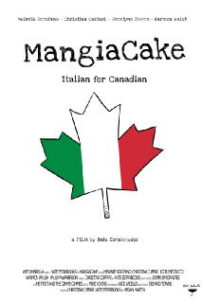 Two women are confronted to the realities of sisterhood when certain circumstances force them to move back in with their mother and grandmother.

The cast of Mangiacake had their world premiere last week from the comfort of our very own capital. If you’re wondering whether or not this film is worthy of the praise it is receiving, we’re here to tell you that it is. Indeed, Christina Cuffari and Nathan Estabrooks have given us quite a masterpiece.

Mangiacake is a comedy/drama that follows the explosive relationship between two sisters, Tessa (played by Melanie Scrofano) and Marie (played by Christina Cuffari). They are both trying to get their mother’s attention the best way they can which leads them to clash in the most spectacular and entertaining way.

Mangiacake does not take unnecessary detours in its storyline and the challenges faced by the characters remain realistic. Yet, it still finds original ways to explore many subjects such as: the clash of generations, the passing of family values and traditions, romance etc. Nathan Estabrooks manages to illustrate every small elements of the dynamic within sisterhood. This is only made more entertaining thanks to the chemistry between the two lead actresses who deliver some incredible performances.

This film will make you smile, laugh and think. The pacing slows down at times but it allows the film to focus on what makes it so intimate. The audience will feel invited into the characters’ home and will want to spend as much time as possible with every members of Mangiacake’s Italian family; especially with Nonna (Jocelyne Zucco) who steals the show more than once. That being said, the performance given by the supporting cast is just as fantastic. So much that it becomes hard to believe that we’re not observing the lifestyle of a real Italian family. Overall, this movie’s charm resides in its simplicity. It is funny, entertaining and leads to some very deep conclusions. We are eager to see what this amazing duo will do next and we recommend Mangiacake to anyone who is into the genre.