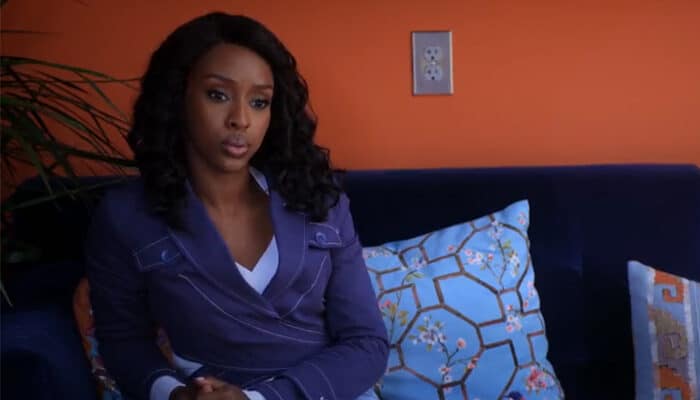 Zac is finally released from jail, but Hayden is still onto him. Meanwhile, Gary is starting to unravel. Here’s our Tyler Perry’s Sistas Season 4 Episode 18 recap.

Leaving off from last episode, Zac is frustrated at being behind bars, taking one step forward and two steps backward. Fatima talks about breaking Zac out of jail, which he thinks is a joke, but she ain’t joking. Are they setting up the plot for the Zatima spinoff? Perhaps.

Calvin, Maurice and Que bond as Calvin is shown pictures of his night of drunkenness. Once Calvin leaves, Maurice and Que laugh together, building a deeper bond as Maurice warms up to Que staying at his place. Something is brewing.

Aaron then stops by the salon to give Karen back her keys which he found in her couch; only thing is they aren’t her keys after all. Another slap in the face.

Sabrina’s African prince, Bayo, then reemerges, paying her a visit at the every so empty bank. She finally asks why he never told her he was a prince to which he responds with some deep sentimental, perfect Black man talk. Although this relationship seemed a little forced in the beginning, it’s starting to evolve nicely. Sabrina and Bayo are starting to become a couple you actually want to root for.

Meanwhile, there are still some who are trying to figure out what happened to Zac. Jake calls the law firm looking for Fatima in order to reach Zach and ends up talking to Andi. Andi learns Jake and Gary work together setting off some suspicions. At the same time, Preston arrives at Zach’s place as well looking for him as Jake and Preston meet. Jake convinces Preston to call Danni to learn about Zac’s whereabouts leading to another awkward encounter between him and Danni (can they just get back together already?) Prior to this, Danni runs into Logan, the undercover cop, at the airport leading to a lot of flirting and a dinner date.

The whole scene sets up Jake as the glue in a few stories, tying together subplots that don’t seem to be related. Nobody knows him, but he seems to know a lot about what’s going on. He’s going to be a major factor, a silent assassin and unlikely hero going forward.

Later in the episode, Robin lets Andi know that he pulled some strings and Zac is going to be released from jail. He asks Andi, “He’s not going to run, right?” once again, alluding to the next direction in their story.

In the same scene we learn Hayden has gained access to a federal database. We later find he’s looking at video of Zac working at the airport.

Near the end of the episode, Gary and Aaron are reunited for the first time in a long time. Gary shows his obsessive behavior again and confides he’s been watching Andi through his telescope. His whole plot with the gifts is fully revealed. Dude is frantic and starting to unravel, but Aaron finally calms him down; but for how long?