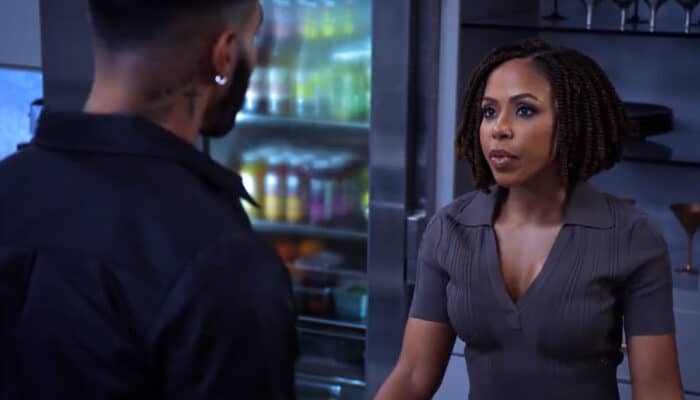 Fatima looks to get Zac out of jail while Sabrina finds out her man is a prince. Here’s our Tyler Perry’s Sistas Season 4 Episode 16 recap.

Continuing from last week, Sabrina finds out she’s making headlines in Africa as the main squeeze of Bayo, the prince of Embicktou, or as Danni calls him “Black Panther and Eddie Murphy rolled up in one”.

Also carrying over from last episode, Andi got Fatima out of prison. She finally gets ahold of Zac and is looking to use her illegal resources to get Zac out of jail. Robin called in a favour with a judge who owes him but Zac still has to spend the night in jail.

When Andi isn’t getting Fatima out of trouble, she’s dealing with trouble of her own. She finally gets “El Fuego” to do the security sweep of her apartment that she talked about two or three episodes ago as she still doesn’t trust Gary (and for good reason). Danni and Sabrina walk in to talk about the Karen and Zac drama leading to a little awkwardness between Danni and her on and off again side piece.

Robin is also up to something himself. He and Hayden get better acquainted after they both work late. Hayden learns something about Robin that has him feeling a little uncomfortable.

Meanwhile, sensitive men are up as Aaron’s good streak continues. He drew a beautiful sketch of Karen that broke her down and won a bit more of her heart. There may or may not have been some straddling and shirts removed. I have to say, last episode I started to like Aaron just a bit and I’m liking him a bit more this episode. I’m not gonna lie, this whole scene showed that Aaron has some game after all. He’s not as lame and sad as I thought.

Meanwhile, Maurice escapes the house to avoid Que and finds solace at the gay club where he bumps into Calvin. After getting a little turnt up, Calvin goes home and has a little talk with Que who reveals he’s not really homosexual; he’s “cash sexual” and does what he does for survival. According to him “a hole is a hole” (the most barf worthy line in the whole episode).

Is nice guy Que an act after all? Is Calvin finally going to “explore”? In the end, Que makes Calvin an offer he may have trouble refusing.