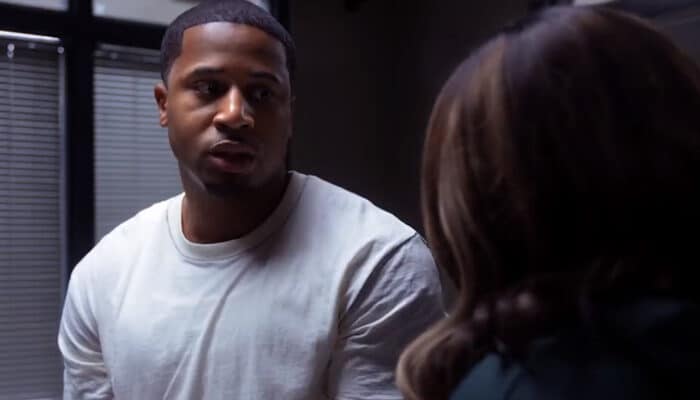 Karen is still confused about her feelings for Zac and Aaron, and Zatima are reunited. We talk about it all in our Tyler Perry’s Sistas Season 4 Episode 17 recap.

Not only does Aaron have game with the pencil and sketchbook, but he also has game in the bedroom. Aaron and Karen are in the middle of having a very intense and passionate moment when the girls interrupt, wanting the low down on Karen’s doctor’s appointment. In the convo they discover she doesn’t know who the father of her baby is. Aaron leaves deciding to give her some space to figure out her feelings for him and Zac. Congratulations to Aaron for not allowing Karen to reduce him to a consolation prize. She later confides to the girls that still confused about her feelings for Zac and Aaron. Sabrina reveals her own secret, telling her friends she’s dating a real life prince.

After helping to get Fatima out of jail last episode and convincing Hayden he’s gay, Robin goes over to Andi’s place for some after work extra curricular activities, but he questions whether things are really over with Gary. Meanwhile, Gary is being a Peeping Tom, watching Andi and Robin have sex through his telescope. Turns out creepy and obsessive Gary was still there all along. Gary and Hayden continue to put their heads together about how they can get Robin.

This sets up Round Three in Hayden vs. Andi as he wonders how she got Fatima out of jail. In the next scene gets a bit of an answer as Robin is revealed as the new owner of the company (chess moves). Does this mean Robin will be moving to Atlanta? We’ll have to wait and see.

Due to Robin’s handiwork, Fatima gets to visit Zac, but Robin still hasn’t made any progress in getting him out as we learn Zac’s legal issues get even deeper.

Meanwhile, Maurice is shocked to come home and find Calvin and Que in bed together. I’m not saying anything else; you’ll have to watch it for yourself.