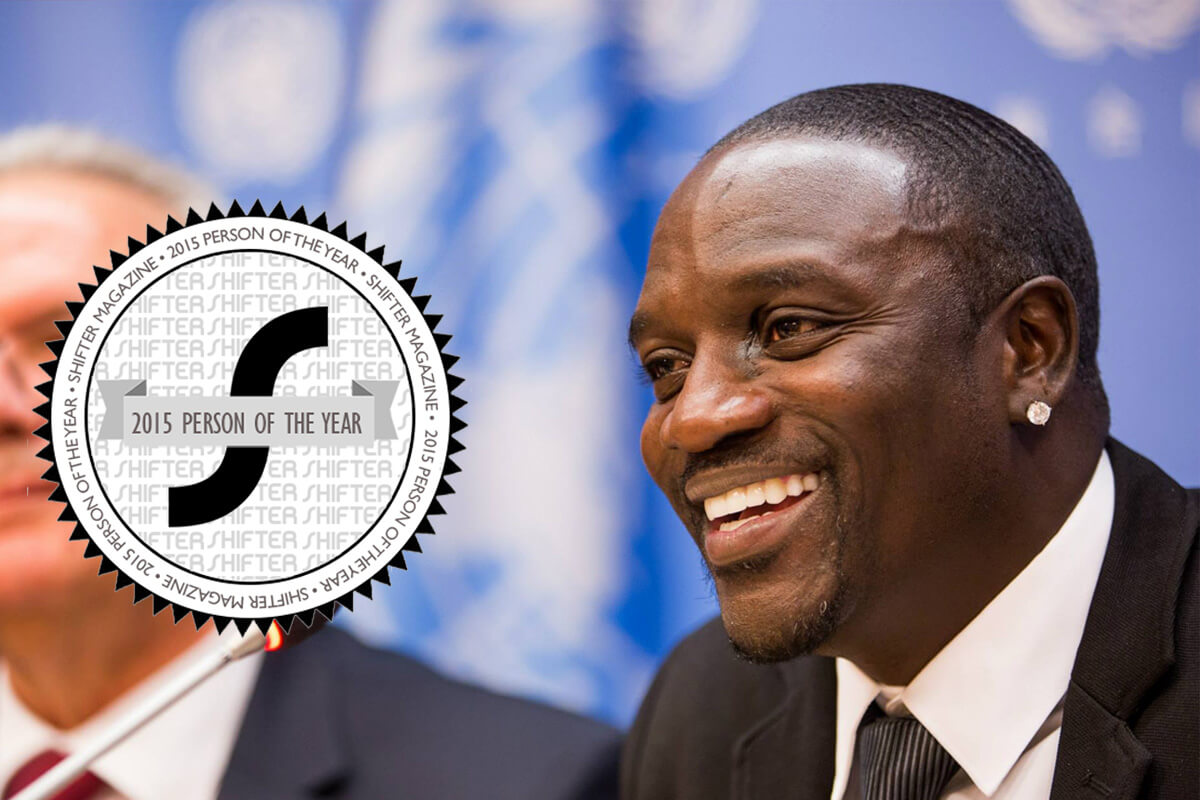 We are happy to announce that the SHIFTER Magazine Person of the Year for 2015 is none other than recording artist, entrepreneur and philanthropist, Akon. This year the Right Now singer had a big year, probably more so for his development work than his music.

Earlier this year Akon announced his Lighting Africa project where he would bring solar power to 600 million Africans in 1 million homes through his company Solektra International. So far the project includes 480 communities in 15 countries, 100,000 solar street lamps, and 5,500 indirect jobs created.

On December 15th Akon launched the Solektra Solar Academy, another key component of the Lighting Africa project. The centre, expected to open in January 2016, will be the first institute in Africa entirely dedicated to solar technologies. Earlier in December he participated in the REenergising the Future conference in Paris organized by the International Renewable Energy Agency (IRENA).

Akon is changing the game when it comes to celebrity involvement in development initiatives. While celebs are no strangers to lending their names to million dollar aid projects, Akon is doing the exact opposite. His focus isn’t on aid, but on capacity building and economic empowerment through the private sector. Akon says of the project,

“…solar technologies are now cost-effective and can be deployed massively to support Africa’s economic development. Our continent will thus be in the position to drive global growth in the near future.”

While Akon has gained much press and recognition for his development work, we can’t forget about what he’s known for most- his music.

Akon went out on his Pre-Stadium Canadian tour in 2015 to promote both his upcoming album and Lighting Africa. What’s even more impressive is the distribution model for his first new studio project in seven years. Akon has chosen to bypass the typical industry model of record labels, iTunes and digital streaming services, electing instead to distribute his album for free through his Stadium app. Akon will release four albums- Stadium Island, Stadium Urban, Stadium World and Stadium House. Fans will be able to access one album for free and the remaining albums, as well as ringtones, wallpapers and Akon-inspired emojs the more they engage with the app. But Akon is smart. He still plans to keep his ties with the industry. The fifth album, Stadium Pop, will be released through Atlantic Records and the traditional industry model and he plans on sharing his innovative app-based distribution model with major labels.

Akon truly defines what it means to be a SHIFTER. Whether in development or music, Akon is clearly thinking outside the box in a way that most celebrities aren’t. He brings an innovative and entrepreneurial approach to everything he does and is leveraging his fame to bring lasting change and quality of life to people who need it. Congratulations to Akon, SHIFTER Magazine’s Person of the Year for 2015.

Visit here to visit our Person of the Year archive