Winnipeg’s Fresh IE on the next generation and why he’s more focused on making an impact than keeping up with the Joneses.

In 2005, Canadian hip-hop artist Fresh IE stepped onto the stage of a theatre packed with angry gang members. They lined the walls, watching him closely. Without knowing it, he was performing in the same place where a gang member had been murdered the week before. To make matters worse, without realizing it he was wearing the colours of their rival gang.

After telling them about his former life of pimping women and selling drugs, and how he found his purpose and identity in Christ, he gave an altar call. A large number of gang members came forward to receive prayer and to pledge their lives to Jesus.

When the concert ended, a man came up to Fresh and said, “Hey man, there’s a guy in the back that wants to see you.”

Fresh, gang savvy from his early years on the street, was instantly alert. He knew that when the guy at the back asks to see you, it almost always means trouble.

He was taken outside, behind the building, to a drug dealer. The dealer said, “Bro, I’ve never seen anything like what you did. You were in the middle of a warzone and gang members got saved.” He explained what had happened the week before, and how Fresh was wearing clothes that should have been his death warrant. Then he said something that Fresh was not expecting. “I want to follow you around for a couple of days.”

Fresh agreed, and after a few more shows, the drug dealer committed his life to Christ too.

This kind of story is typical for Fresh, the two-time Grammy nominee who started the independent Canadian hip-hop label, Kingdom Music Family (KMF), less than a decade ago. More than a label, KMF is a movement to cultivate talented Canadian hip-hop artists and to mentor young men in need of godly role models.

Starting with just a few young men in 2006, Fresh helped develop their craft and their characters, as they travelled across Canada and performed with him at concerts. For many of them, it was the first time they had been outside of their small communities. For many more, it was the first time they had known a man who was interested in them for who they were, not for their drug-selling potential.

Unconventional in many ways, the KMF team deliberately brings their concerts to places most musicians haven’t heard of or would rather not go: small towns, First Nations Communities, and prisons. Along with their concerts, they bring important youth targeted messages about suicide, bullying, absentee fathers, and the healing that only comes through the cross of Christ.

Even more unusual, KMF often visits these same places multiple times in a year.  “We’re not just rappers out here hip-hopping and making loud noises. We don’t just entertain people. We are making an investment in communities. We want to leave a positive message so that the whole community will be changed,” Fresh said during a phone interview this May.

And the investment is paying off. For example, Burns Lake, BC changed dramatically after KMF visited the town three times in one year. When they arrived for their first visit, they discovered a disheartened community: the majority of young women had been raped at least once, and 80% of school-aged youth were out of school. They prayed over the community, visited with youth in their homes, and gave workshops in the school. By their third visit, 80% of the youth were back in school, trying to get an education so that they could make a difference with their lives. The school was so impressed, they paid to have KMF continue to return three times a year for the next five years.

While KMF’s impact on lives is enormous (their website states 250,000 youth have come to Christ through the last ten years of their ministry), KMF’s presence in Canada has gone largely unnoticed by the music industry. There is no money, and therefore no interest in concerts performed in isolated towns or inner city crime zones.

Even so, Fresh IE is still committed to reaching out to the lost. Over the years he has mentored 15 young men spread out across Canada, who can take up the work of ministering where few others dare to go. “Nothing can be more exciting for me as their teacher,” Fresh said, expressing how grateful he is to have had a part in developing people whose ministry and musicianship surpass his own. “With them in place, I can focus on local ministry.”

The ministry opportunity Fresh refers to is inner city Winnipeg. He’s teamed up with Youth for Christ to create a discipleship program called EDIFY. Short for Education Development Inspiration For Youth, EDIFY appeals to inner city youth who like music and are longing for a positive role model. Once a relationship between mentor and mentee is formed around music, the way is opened for the mentor to talk about Christ.

There is still a long way to go before EDIFY becomes a reality. Though approved as an official ministry of Youth for Christ, the program still needs to raise 80% before it can officially launch.

The adversity any musician faces is great, even when playing the festival circuit. For KMF, whose ministry often passes below the radar, the challenges are even harder. So one has to ask, why doesn’t KMF leave Canada? The United States has a broader hiphop culture that is always looking for the kind of new and innovative talent that the recording artists at KMF have.

Fresh IE’s answer is simple and direct. “Our heart is to reach Canada. We love our peers south of the border, but our mission field is Canada and we need the support of our nation to help us reach our youth.”

For more information about how to support Kingdom Family Music’s ministry or to listen to free music, please visit kingdommusicfamilycanada.com.

Below is an excerpt from our exclusive interview with Fresh IE. We talked to him about the up and coming artists in his camp and the state of Canadian hip hop. This interview has been shortened and edited.

Q: So the first question I’d like to ask you is how did this all start for you?

It all started when the Lord saved my life in 1998 you know. It was an unorthodox conversion and it really came as an epiphany at the same time as just being rescued from the Lord. And with my addictions and looking at prison time, and how God found me through the eyes of a blind man in the middle of the street in Winnipeg. So he didn’t find me, like…I wasn’t at no church and heard the message from the man; it was a direct interception from God that catapulted me into my destiny.

When I got saved it was the right time for me because my whole life I was searching for love, I was looking for a father and for a mother because mine weren’t there for me. Being raised by my grandmother, I was always looking for that affirmation as a young person. When I got saved I wanted to really impact young people, but young men in general, to mentor them and love them in the place where they’re at, whether they are in church, they’re misfits in church, or they don’t fit, or they’re coming out of the street, and they came from the same place as me, I wanted to be that big brother.

I remember how it was when no one believed in me with music and I’ve always had music… you know music was my refuge. So when the Grammy’s came, I knew I wanted to mentor, I wanted to disciple and build a team of men in our country from all across to impact our nation and not to be superstars and go to festivals and be on the charts. I love that and that’s a blessing, but I have a heart for our nation, to see First Nations from Nunavut right to Ranken Inlet, to see African Canadians and to see all types of nationalities rise up and begin to take their place and realize that we are the people of God.

Q: So in regards to the state of hip hop in Canada, where is it at and where do you think it’s heading?

It’s a hard thing for Canada. I think now there’s a lot of young men, men of God who are really starting to make some great music out there especially coming from all across the country. Even with my camp…it’s incredible. I got a brother from Moncton, he’s originally from Halifax, he’s here with me in the studio and I’m just making music for him and just seeing that these young men are actually making some music that’s really gonna help our country.

About Hip-Hop, man it’s tough, even Drake had to go to the States to really make it. But my encouragement for young people who are making music, that they want to do music in ministry: really listen to the voice of God and where he wants you to be. We can always come up with a strategy- I want to do music for the club but still be in ministry and if you’re not called to do that you’ll get beat up. So it’s just important to really know the voice of God, and the purpose that God has for you and your music so that when you do make it, it will be made for its its purpose.

As for the state: well I think we’re slowly beginning to have our own sound separate from the States in terms of you know even with secular and even if you’re talking just in general, there’s a sound in Canada that’s Beginning to develop Like I said I’m not really plugged in as much to the Hip-Hop scene as I want only because I’m trying to focus on the call of God on my life right now.

Well I got a couple guys right now that are almost ready to go public, not public, but of course they’re public like Facebook and Reverb Nation, but they really actually have what it takes to go and make some noise in the country. So I’ll give you a couple names from my point of view, from my fam: Young Scribe is one of the first artists who I’m going to be bringing out, his album is almost done now. His album is banging, it’s crazy. It’s like Reggae, Hip Hop, R&B all mixed up, and it’s fresh, no pun intended. He’s coming up very soon.

And then I got a young man from the Congo and I’ve been mentoring him. Crazy talented when you think of him, you think of like a Tupac with a Biggie mixed right in. His name is Refuge and his stuff I’m working on right now, He’s got an EP on iTunes right now but his full length album will be out probably by the Fall and it’s going to be heavy. So there’s Refuge, there’s Young Scribe, there’s One8Tea from Halifax who’s here he has no music released publicly right now, but when you do hear it, when it comes out, you’re gonna think he’s been doing it for like ten years.

There’s my man Geronimo from up North that I’ve been mentoring. There’s my man Zane from Saskatchewan. Who else we got? Bravehart and Ti-Real. There is so many. There’s Artison of course, I can’t wait to get some music out of him. 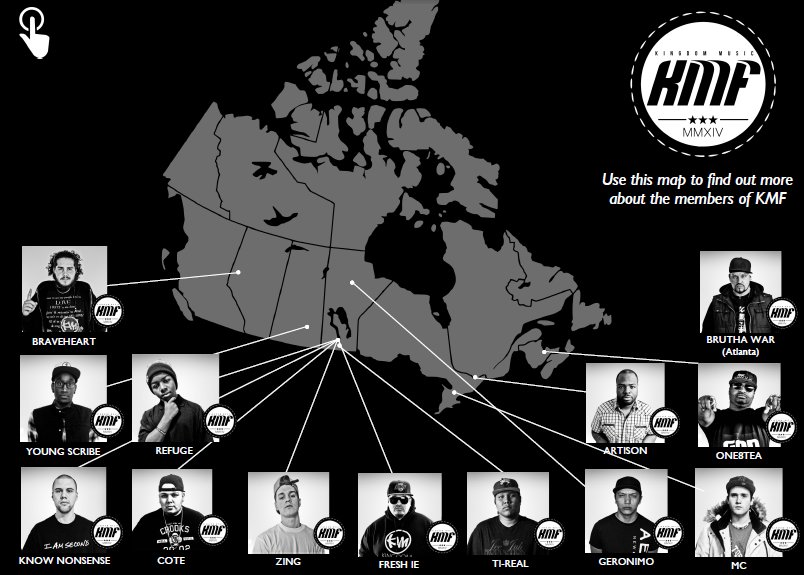