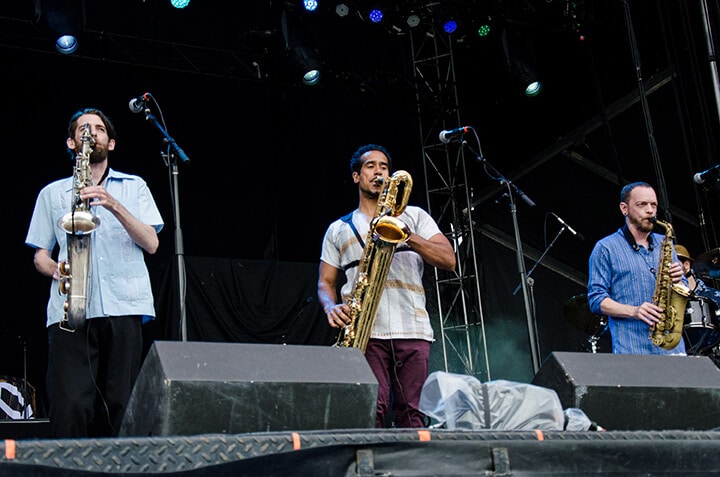 Full disclaimer. I am a huge fan of Jazz, Reggae, Soul and Afro Beats. So in a way, the following review might be somewhat biased.

Music as a whole is a universal art. There are so many genres and sub-genres out there that it makes it very difficult to associate modern musicians with an accurate label. Sometimes, you simply don’t need to.

What the Souljazz Orchestra is able to do is fantastic. They manage to blend different styles and beats while paying homage to the origin of those styles. By doing so, they transcend the barriers of cultures and nations and provide us with a unique flavor that assembles everyone under one roof.

You might be thinking I’m exaggerating here but believe me, you’d have to see it to fully grasp what I’m saying. When I turned around and looked at the other members of the crowd, I was left in awe by the diversity of the audience. Everyone was dancing to the different beats in their own ways, regardless of how their entourage was reacting. And that’s the beauty of it- nobody can be judged for how they responded to the music.

The group also took the time to share their appreciation for Ottawa, which is primarily their home city. They offered a few anecdotes of their many travels, told us the origin of certain songs they wrote and what inspired them and even switched up languages, including Swahili, throughout the show while teaching the crowd how to sing along.

Another highlight of the show was when they introduced the song Soulfire which will be featured on their upcoming album, set to be released in September of this year. I could go on and on but this review would never end.

If anything, the show felt too short. I don’tt think one can fully be satisfied with a Souljazz Orchestra performance that only lasts an hour but felt like 15 minutes. There were so much stories to be told, so much styles to explore and only such a limited amount of time to do it in. That’s not something I could blame them for. In retrospect, I think it made me look forward to their next appearance which I would definitely be present for. If I were to give this one a score, I’d give it five stars.