Hip-hop is on the rise, and there’s no bigger evidence of that than in First Nations and Native American communities across North America. For years Indigenous hip-hop acts were slept on and overlooked, but now they’re increasingly stepping into the limelight, winning awards and playing the summer festival circuit just like their non-Indigenous counterparts.

What’s refreshing about this brand of hip-hop is that it’s probably truer to the origins of the culture than some newer hip-hop acts. First Nations and Native American artists use their music as a tool for social change and to elevate their community the same way Grandmaster Flash and the Furious Five, Public Enemy and KRS-One did in the 80’s. You won’t hear them talking about alcohol, drugs and violence because they feel a responsibility to their people and are trying to break stereotypes instead of adding to them.

North of the border, Ottawa is emerging as ground zero for this growing Indigenous hip-hop movement, with names like Jah’kota and award-winning DJ and production crew A Tribe Called Red.

Another name to remember is Cody Coyote. 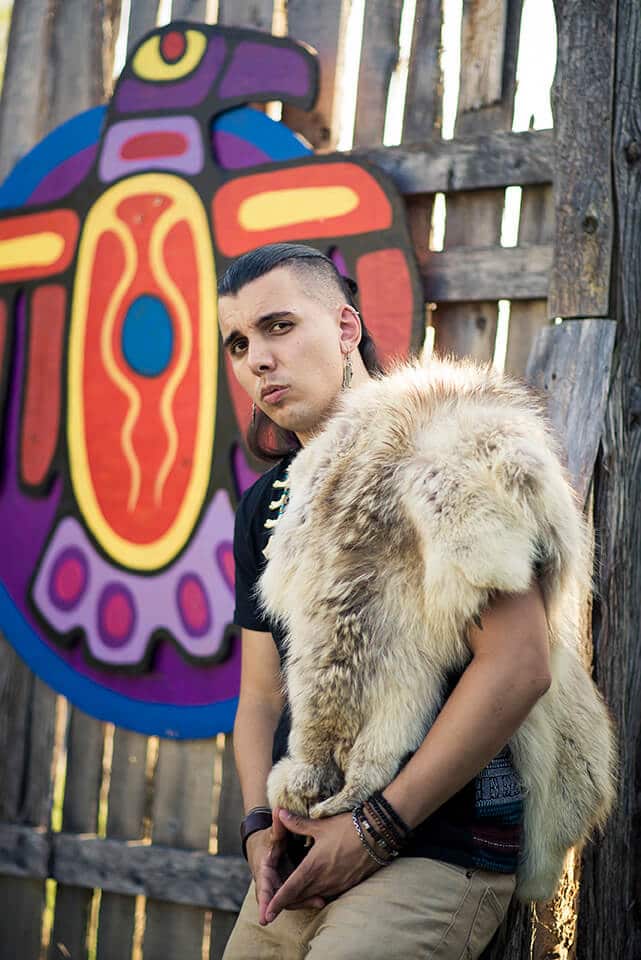 A few days after missing his show at this year’s edition of House of Paint, I had the opportunity to catch his impromptu show at Ashes to Rubies where he not only performed a few songs but shared his incredible life story.

“Growing up as a First Nations person in Canada was difficult at times. I was often spoken to as if I was inferior, faced racism and felt my own struggles from loss of cultural identity,” he said when asked about growing up in Canada.

It was his time at school that would pose the biggest challenge. Cody Coyote would often find himself being harassed by other students for having long hair and looking different. This meant bullying, name calling and racist comments which in turn led to anger, violence, depression, drug and alcohol use, and some bad decisions.

Although life at home was good for the most part, it was hard to talk to anyone about the problems he was facing, even his family (although he later found out his father went through the same thing).

Another major struggle was growing up outside of his culture and having little to no cultural identity.

Like other First Nations people, Cody Coyote’s father was adopted in the 60’s by a non-Indigenous family, losing his connection to his roots.

“Growing up I had so many unanswered questions and as I became more knowledgeable about the 60’s scoop and the role that Indian agents played, I wanted to dig deeper. I began to understand the inter-generational effects of child welfare in regards to the disconnection of culture in some circumstances. This fueled a lot of the rage that I carried, especially when living in a part of Ottawa where there was a lot of privilege,” he noted.

After 25 years he and his family have finally been able to reconnect with their blood relatives from Matachewan First Nation.

One of the things that helped Cody Coyote get through everything was rap.

He first started rapping and making music in high school when he was just 16 years old and it remains an outlet to this day.

When asked about the impact he wants to have in the game, he said, “The impact that I want to have on Indigenous peoples is to provide hope and allow them to realize that we can overcome the struggles that we face. We can rise above those struggles together and that we can initiate positive change through togetherness, unity, respect, love and support for each other’s journeys. Within hip-hop I would like to display that it is about reality and that it has the ability to create change in the world. I would like to make an impact where women are respected, where conscious messages are represented more than ones related to the use of drugs and alcohol, and where lyricism and music are able to help with the healing process for the people undergoing struggles.”

This is the spirit behind his latest album “Mamawi”, which means “All Together” in Anishinaabemowin, the traditional language of the Ojibwe people.

Cody Coyote says of the project, “This album was created to initiate and embody a message of togetherness. I feel it is very important to have togetherness right now because in order to truly achieve true reconciliation we will have to bridge the gap that has been created between settlers and Indigenous people and work together. I hope to help with positive change by educating listeners on what can be offensive towards Indigenous people, by sharing the struggles I’ve faced as an Indigenous person growing up in Canada and to keep the conversation going around reconciliation, but to also initiate action that follows it.”

“Mamawi” is now available on iTunes.

“My people will sleep for one hundred years, but when they awake, it will be the artists who will give them their spirit back.” – Louis Riel