On a personal level, the show I was looking forward to the most at Bluesfest 2018 was Ghostface Killah. As I mentioned in my Bluesfest preview, I’ve been a Wutang fan since 36 Chambers came out in 1993. Between my sister and I, we pretty much had every group and solo project on cassette (CDs still weren’t that popular).

I’ve seen some hip-hop legends perform in Ottawa, from Nas at Bluesfest 2015 to Smif-N-Wessun at last year’s edition of House of Paint, and what always shocks me is that the crowds are so young, and to be honest, so white. And that these people actually know the words to their songs. It was no different at last night’s Ghostface Killah show.

Walking over to the Black Sheep stage I heard a young girl say, “I don’t know any of Ghostface Killah’s music, but I’d rather see him than Shawn Mendes”. Wutang really is forever (and for the children).

As Ghost started his set, I couldn’t stop smiling. He took me back to being a 16 year-old again and I got lost in the music; so much so I forgot I was actually there to do a review. Pull yourself together, Kevin.

Somewhere in the intro the DJ yelled out, “From the slums of Shaolin. Representing the mighty Wutang Clan. Ghostface Killah!” Serious chills all over my body. I wanted to scream, but I had to compose myself.

Ghost was joined on stage by Sunz of Man member Killah Priest. At first I wondered why he brought him of all people, but he turned out to be a crazy hype man. Every prominent member of the Wutang family has their strength. They’re like weapons in their arsenal and they know how use to each member effectively. 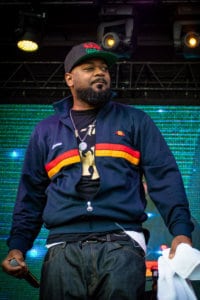 They opened the show with Ghostface’s verse from Bad Boy’s Special Delivery remix. You’re always used to hearing Ghostface on RZA’s dark, cerebral, soulful production, but Ghost on a big Bad Boy remix is epic. That Special Delivery beat fits his voice like a glove and looking back it would’ve been nice to hear him on more of those kinds of beats throughout his career.

After a few more tracks, the DJ played a few legendary hip-hop beats that Ghostface and Killah Priest would either rap or ad lib over. They did this throughout their performance- Sound of Da Police, Shook Ones, Incarcerated Scarfaces (my favourite solo Wutang track), Eye for An Eye, and Deep Cover to name a few. Ghost and Killah Priest would go back and forth between his solo tracks and legendary hip-hop songs.

Then he went into the Summertime remix, the Puff Daddy-produced Beyonce track featuring Ghostface. To be honest, I never knew this song existed, but apparently the album was never released so I don’t feel bad.

Then the show took a weird turn that I wasn’t expecting. The DJ, Ghost and Killah Priest led the crowd, thousands deep, in singing songs like Killing Me Softly, We Will Rock You, Smells Like Teen Spirit, and Jump Around. They’d later throw in Sweet Dreams by the Eurythmics and Is This Love by Bob Marley. This was smart since it allowed those in the audience who didn’t know Ghostface or Wutang’s music to still connect with his show (but it was still unexpected).

At one point he said it was because of people like us in the crowd that Wutang is in the Rock and Roll Hall of Fame with the greats. As he reminisced a bit about the last 25 years, you can tell he’s still a little bit in awe of what they’ve been able to accomplish.

They closed with some Wutang classics, including Fatherless Child, Protect Ya Neck (where they brought a few people out of the crowd to do Meth and ODB’s verses), Mystery of Chessboxing, ODB’s classics Shimmy Shimmy Ya and Baby, I Got Your Money, Gravel Pit, and Cherchez LaGhost.

The whole show felt like a throwback to the origins of hip-hop where the DJ really drove the show. The DJ acted like the host, and the turntables and MC’s were his instruments. With the DJ hosting the show and Killah Priest playing the role of hype man, Ghostface didn’t really have to do any heavy lifting. He wasn’t disengaged, but he didn’t need to be the focal point for the whole show. What we got was a highly engaging show compared to other hip-hop concerts today. They were real Masters of Ceremonies in the traditional sense of the word. I left the show feeling like Ghostface was a friend; someone I’d want to just chill with. And as I’ll note throughout Bluesfest, they didn’t rely on backtrack vocals.

The only criticisms I’d have is that while I appreciate them going into classic songs like We Will Rock You and Smells Like Teen Spirit, and I see the genius in it, I could’ve done with a little less of that. As someone who grew up on Wutang in the 90’s, I went to this concert to hear Wutang not that other stuff. Still, it was definitely one of the best shows I’ve seen so far in 2018.