Day 2 of CityFolk included some big names like Hawaiian singer-songerwriter, Jack Johnson, but it was also a great night to see some lesser known, local talent. Performing at the same time as Johnson was the Ottawa-based country rock band Honey & Rust. I’d heard one of their songs before but this was my first time seeing them live.

Even before they started playing, watching them set up set the tone for the performance. Lead vocalist, Jo Beattie, who was already on keys, put her harmonica around her neck and backup vocalist Cristy Williams took her seat at the drums. That says badass right there.

The band opened up with the up-tempo “Sinkin” before going on to “Wild Horse”, the first song to showcase Jo Beattie’s big, booming voice that we’d hear throughout the show. My untrained country rock ear perceived a Johnny Cash influence. The song had an intro that sounded like something out of a Western film and had that “train going down the track” sound Cash made famous (I felt validated later when they performed a Johnny Cash cover. My ear for country rock might be better than I thought). 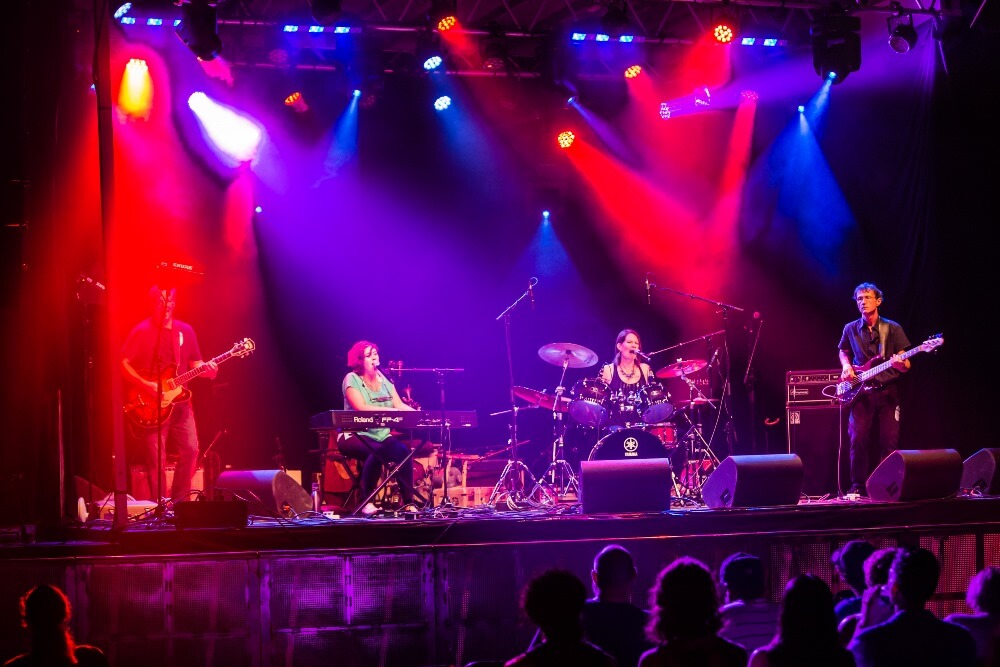 They then slowed it down with more of a ballad with “Love Intertwining”. As all good performers do, they went back and forth between up-tempo and slower songs to mix up the mood and keep people engaged.

At some points in the show Beattie got personal. First, when introducing “Budapest to Vienna” fittingly about her trip from Budapest to Vienna and feeling helpless about not having control over a relationship, and then on “Long Time Through”, a song about her mother’s divorce after 34 years of marriage. Featuring the harmonica and that twangy country sound, out of all their original songs “Long Time Through” provided the best demonstration of the power of Beattie’s vocals.

Just before closing they performed probably their most well-known song, at least most well-known to me, “Hold Me Down”, which sounded a lot better live. The opening lyrics of the song are, “Hold me down, hold me back. Everything within me wants to attack.” I thought to myself, “How appropriate”, since they seemed to attack most of their songs throughout their set.

The highlight of the night was their covers of Johnny Cash’s “Ring of Fire” and The Kinks’ “You Really Got Me”. I don’t usually like to hear covers at a concert but they got the crowd going and really showed off what Honey & Rust is capable of doing both vocally and in their sound. At one point during “You Really Got Me”,  the final song of their performance, Jo Beattie belted out a high pitched and on-key scream, then pulled away from her keyboard for a brief second before continuing the song. It was the most badass moment of the show. More of that, please.

Honey & Rust is one of those acts that’s hard to pigeon hole or fit into a particular genre. Their sound was distinctly unique yet at the same time familiar. Musically, they literally don’t sound like anybody else, and their songwriting and storytelling is exceptional (you can actually see what they’re singing about), but Beattie has a big, booming and soulful voice that I felt I’d heard before among some of the legendary rock or country singers. Scouring their website they list Patsy Cline and Janis Joplin as musical influences. That’s sounds about right.

Overall, it was a good show. There was a little foot stomping, a little soul, and some great songwriting. Definitely a group to follow as they grow in their career.