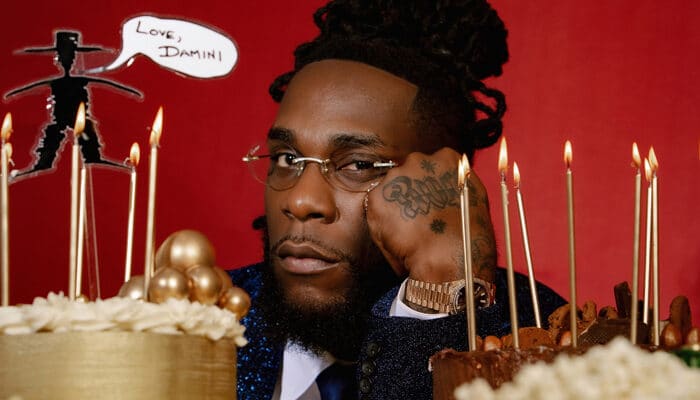 ALBUM REVIEW – BURNA BOY’S LOVE, DAMINI IS A BIRTHDAY GIFT TO HIMSELF

Back in April, Nigerian superstar, Burna Boy, announced a brand new project. Well, the album now titled Love, Damini is officially here. He recently previewed some of the track, including a new joint with Popcaan, that has him trending on Twitter.

The album opens with some traditional African sounds with in the form of harmonies from Ladysmith Black Mambazo. The laid back minimalist production, with strong but not overpowering instrumentation, allows his voice to be the star of the show. This minimalist production makes appearances throughout the project.

Other standard tracks include “Solid” featuring Blxst and Kehlani, “Rollercoaster” featuring J Balvin with its strong vocals, harmonies and production, and “Common Person” a more traditional African song that will make you want to sit down and think about life.

Ed Sheeran, who has been venturing into island vibes that has him invited to every cookout and function, also blesses the album with “For My Hand”. Their voices blend very well and you can tell Sheeran had a hand in the production as it resembles some of his previous releases.

Album ends as it started; with support from Ladysmith Black Mambazo. With half the track in a capella, it’s a soothing end to the album and brings the whole project full circle.

What is impressive about the project is that the ambitious 19-track album only two pre-released singles―”Kilometre” and “Last Last” which both have over 20 million streams respectively on Spotify alone.

What is also impressive is that he chose to go very international with his features with names like Popcaan, Blxst, Kehlani, Ed Sheeran, J Balvin, J Hus, and Khalid pointing to his global and mainstream aspirations. But despite pushing in that direction, Burna Boy has found a way to stay true to his African roots and create a project that still sounds authentically Burna Boy and that will connect to his existing fanbase while inviting new listeners to become fans. Listening to the album, you don’t get the sense that he was just trying to make big records or rack up streams. You can tell he put heart into the album and actually cared about it.

This is by design. In an interview with he revealed this project was very personal to him.

“This is like my birthday gift to me in a way, because there’s no better gift to give myself than something personal”,  he explained. “And literally giving a part of myself to the whole world. So it’s really special.

Love, Damini is available now on all major streaming platforms.