Aside from Ghostface Killah, the other show I was really looking forward to taking in at Bluesfest 2018 was Ottawa rap group Tapas, featuring rappers Cheko Salaam and G. Grand, and producer and Beat Battle champion Jeepz. G. Grand happens to be one of my favourite rappers, no “MC’s”, so I was especially looking forward to this show.

You may ask, “Why the name ‘Tapas’?” A quick glance at their website offers an explanation- “small savoury sonic dishes”. That’s exactly what they served up.

With DJ So Nice of the hip-hop duo Buck-N-Nice behind the turntables, they came right out the gate with one of the songs I’ve been playing heavily over the past few weeks, Check the Resumé of off Jeepz’ Soul Spins tape. It starts with a Deep Cover-like intro that goes into one of the hardest beats you’ll ever hear. No exaggeration. It sounds classic, like something out of New York in the early 90’s.

With some rappers, the beat really makes the song while they as the rapper play a supporting role. In other cases, strong lyricists make a so-so beat into a dope song. In the case of Tapas, the level of production and lyricism are on equal footing. None of the ingredients overpower the others.

They went on to offer other delectable dishes from their self-titled album Tapas in the form of Havana Nights and Take the Stage which sounded like the kind of beat you’d wanna hear Common rap on. What you see from Tapas is the level of respect they have for each other’s craft. They look like they’re legitimate fans of each other as artists. 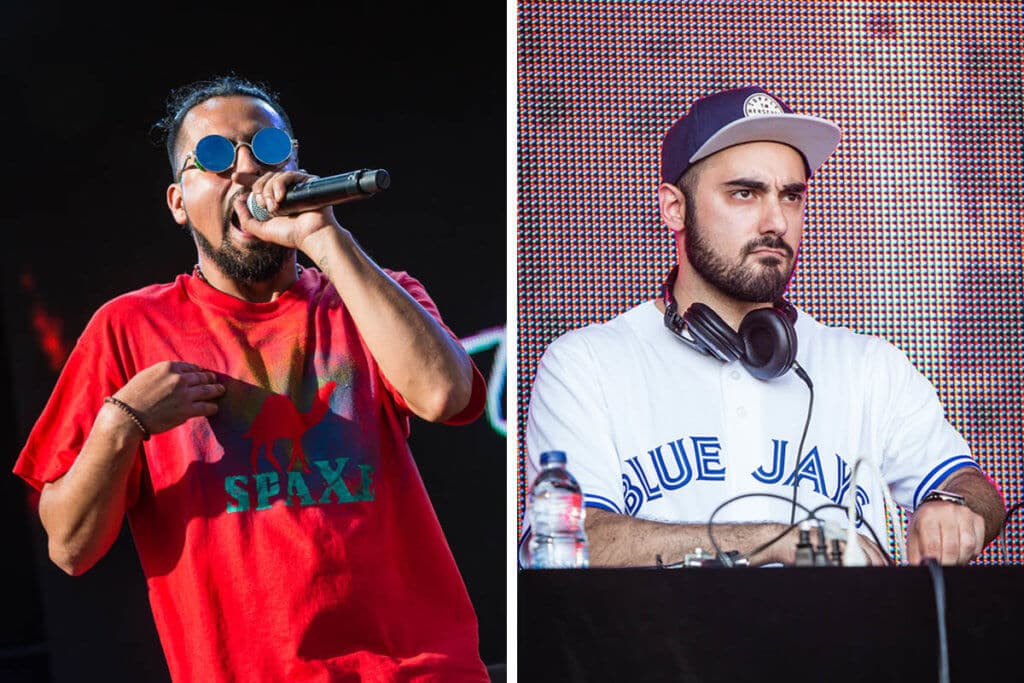 Cheko Salaam of Tapas performs at Bluesfest 2018 (left); DJ So Nice looks on from behind the turntables (right). (©Scott Penner)

The Tapas fare was interspersed with songs from their upcoming projects. Cheko Salaam performed More featuring an energetic Just Peace while G. Grand showed off more of his MCing on Radio. Whether you want to call it swag, bravado, or sauce, G. Grand had lots of it performing this track. In person he comes across as a humble, nice guy, but he didn’t look like it on stage, especially during this song.

After a few solo performances, they made sure to get back to serving up some Tapas, with Gotta Luv It and Si Froide. The sampling on Si Froide is flat out genius and Cheko and G. Grand’s deliveries on this track were impeccable.

They closed with Doin’ It. From the intro you think you’re getting Doin’ It LL Cool J style but what you get is a jazz-infused track about hustle, collaboration and moving Ottawa forward.

Although they’re known for their lyricism and production, they also deserve credit for using their set to platform other talent in the city. As I said before, Just Peace made an appearance as did DJ and producer Circa Beatz, who also played the big stage last year along with Flight Distance, performing a quick beat freestyle.

One of the highlights had to be Ottawa hip-hop vets, and dare I say “supergroup”, Missing LinX, of which Cheko Salaam is member and producer. They performed their song Autonomous Kings about “regalness” and the king and queen in all of us. I recently attended the listening party for their upcoming album SpaXe Camels. I was looking forward to seeing whether the connection I saw between them at their listening party would translate to the stage and it did. What we saw on stage was brotherhood. That brotherhood continued as all the local talent who performed during  the set came out to vibe to Doin’ It, a fitting song for the moment happening on stage.

Ottawa has to be proud of the level of lyricism and production in this city. There’s a new wave of hip-hop coming out of Ottawa that’s making strides and slowly putting Ottawa on the map, but we also have people like Tapas, Missing LinX, and DJ So Nice who keep the culture honest by reminding us what it’s all about.