“Hey, I’m the voice inside your head”. That’s how Roland Prince’s show started. It was a bit weird, but that would end up being a theme throughout his show.

I just got introduced to Roland Prince’s music last week and I like what I hear so far. While Prince embraces being weird, perhaps a better word is “unique”. He has a pretty unique sound and that uniqueness was evident at Bluesfest. He has his own look and sound which is impressive for an up and coming artist. As soon as he came out in some DIY looking overalls I thought, “This guy’s a bit odd”. It was confirmed in his open track Fucked ‘Em when he said, “I’m an odd motherfucker”. It’s a self-produced song from his upcoming project Odd. 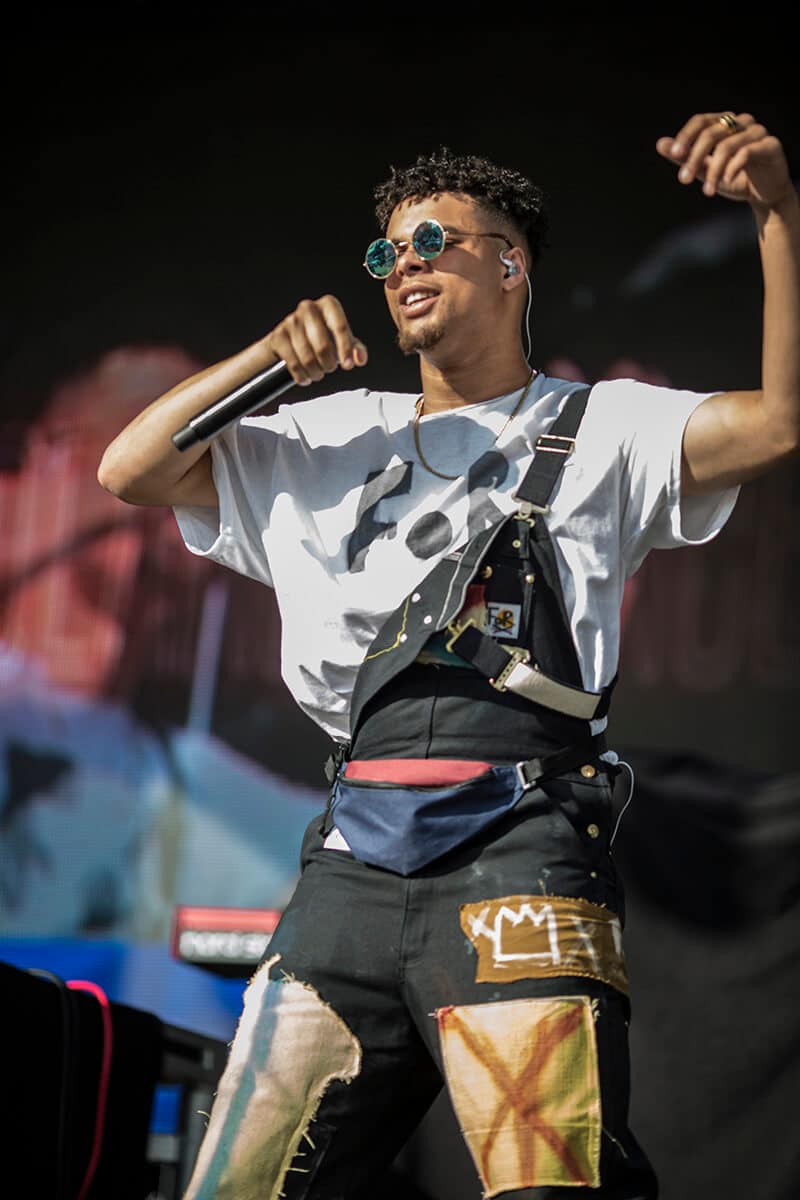 Prince also performed some of his current singles including Cornerstore and Morgues, which he calls the “dirtiest love song he ever wrote” and really shows off his delivery. He can flat out rap and I think a lot of people will connect with his message of being odd and proud of it so he’s an artist to look out for.

He came out on stage wearing a black throwback Ottawa Senators jersey reppin’ his city. Although he’s been living in Toronto, he still tells people he’s from Ottawa and let the crowd know how happy he was to be home.

He started his set with How Many Times which showed off some cool visuals of Pacman going after a moneybag until a gun appears and shoots him. Cool analogy. He then performed L&H where he showed how comfortable he is with his voice and who he is as a vocalist. You can tell that some of the newer artists are still trying to figure out who they are, but not City. He wasn’t trying to do too much by creating a false sense of hype, but he also wasn’t timidly doing too little. He was just doing him.

He then he went into Deep, a song with soul that had the crowd clapping their hands. At moments it sounded like your classic R&B song, but every once in a while City did some different things with his voice that sounded like the new wave of R&B that made you pay attention. Memories in Chinatown was a nostalgic song about growing up in Chinatown, which explains why he has a bit of a cultured, international vibe to him.

Finally, then came the highlights of the show, One More Time, my favourite song right now, which he performed with fellow artist and close friend Carpe DM, as well as his new music with Eva Shaw. Him and Shaw previewed three songs- Snakes, Miles Away, and What You Need – from an upcoming project and all three are bangers. Hits. Fire. All three songs made me screw up my face and bob my head. If these three songs are any indication, this is going to be a crazy project.

He closed out his show with his hit Lately which, according to City, has five million streams on Spotify.

From the first song you see how polished he is as a performer compared to other local artists. I’m not sure if it was because Machine Gun Kelly was performing in a few hours or the time slot, but he drew the biggest audience out of all the local artists we’ve taken in so far. Putting it plainly, I felt like I was watching a star in the making. You can tell he’s been putting in work as a performer. There was an ease about his performance and stage presence that I didn’t see from a lot of other local artists. That’s not an indictment on other talent, but praise for City Fidelia. He has a reputation for grinding and we got to see the fruit of that on stage.