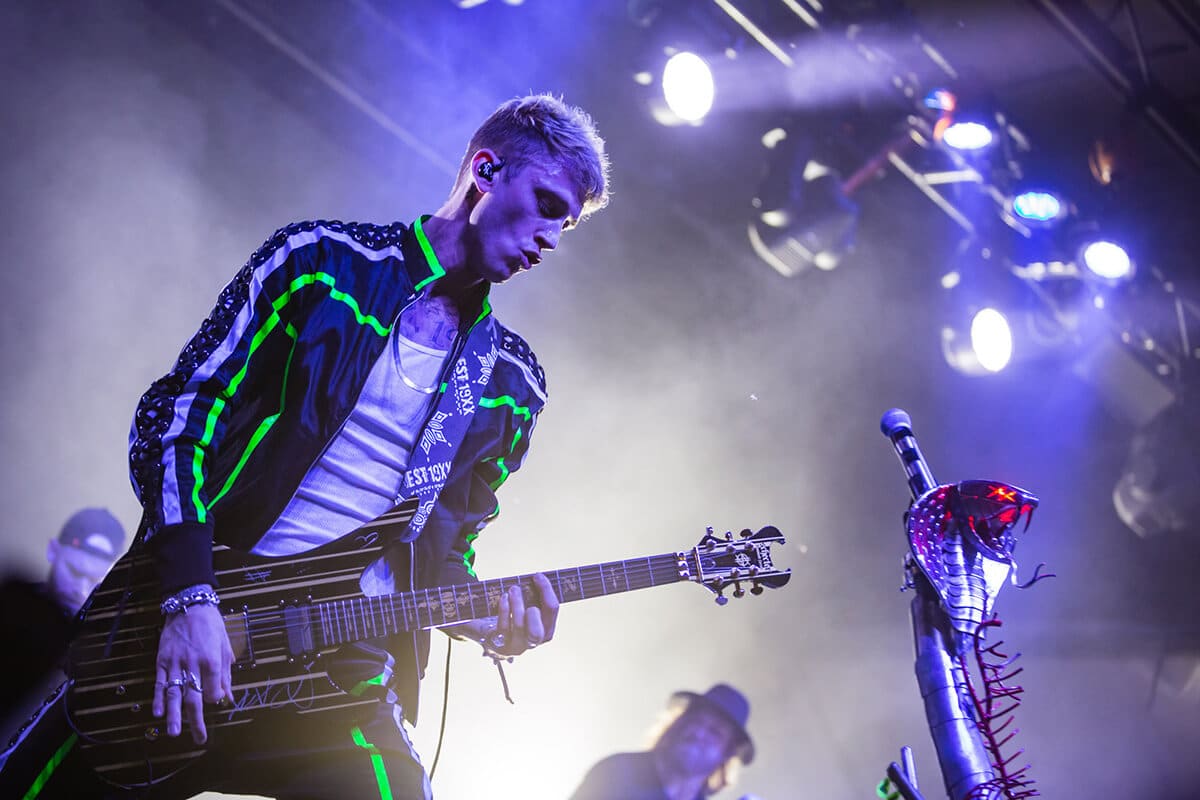 For some people, Foo Fighters were the big draw on Tuesday night at Bluesfest, but for others the main event was happening over on the Black Sheep stage. As I said in my Bluesfest preview, I didn’t know too much about Machine Gun Kelly, but I had a feeling he would be a great performer, and he was.

The show started with what sounded like monks chanting over an epic instrumental. Then he entered with what looked like a race car driver suit with blue and yellow reflective strips. Not exactly the badass I was expecting.

The opening songs were Wild Boy and Golden God, which talks about the usual suspects, drugs and women. The beat is ridiculous, but I wasn’t impressed with MGK just yet. Then he performed his cover of AWOLNATION’s Sail. Nope. Still not impressed.

Then he performed Home. That’s when I was impressed. In introducing the song he said it came about because he wanted to say something without covering it up. The song sounded vulnerable and honest. What made the song even better is that Machine Gun Kelly picked up his electric guitar. Most rappers at his level can rap and get the best producers to produce at hit, but there aren’t many rappers who can play an instrument. This is when MGK really set himself apart from other rappers.

Some of the highlights for me were his performance of Habits. It’s a great song where he was able to show off both his rapping and vocals, and he brought some vulnerability. That’s something that stood out to me throughout the show. I wasn’t expecting to hear so many songs with that much honesty.

Another highlight was the following song, a cover of Kid Kudi’s Pursuit of Happiness. He introduced it asking the crowd, “Can I smoke some weed with you?” Musically, the song is a great song with a great hook and it was made even better when MGK played an electric guitar solo. Badass. This had to be the song of the night.

Aside from his ability to play guitar, the other thing you have to respect is his versatility. One moment he was doing his trap hit, Trap Paris, the next moment he was rocking out on Alpha Omega and Bad Mother Fucker taring off his jacket and tank top and revealing his signature tatts, and then he switched it up and had something for the ladies with Bad Things.

Before closing he performed an extra song, Rehab (the slowest and one of the most vulnerable songs of the night), where he sang about his experiences of the past year, including falling in and out of love. We can assume he’s talking about Amber Rose.

After a long and epic build up, he finally closed with The Land, dedicated to Cleveland, his hometown. It got the most intense crowd response of the night- jumping, moshing, singing.

After experiencing Machine Gun Kelly live I see why he’s such a big star. Aside from being a good musician (and having a crazy band), as well as being a vulnerable and versatile artist, he puts a lot of effort into his performance; he doesn’t hold back. In basketball terms, he “leaves it all out on the floor”. I mentioned in my Bluesfest preview that he struck me as the kind of artist that doesn’t rap over a backtrack vocal and I wasn’t wrong. Performers that put that much work into their live show get my respect.