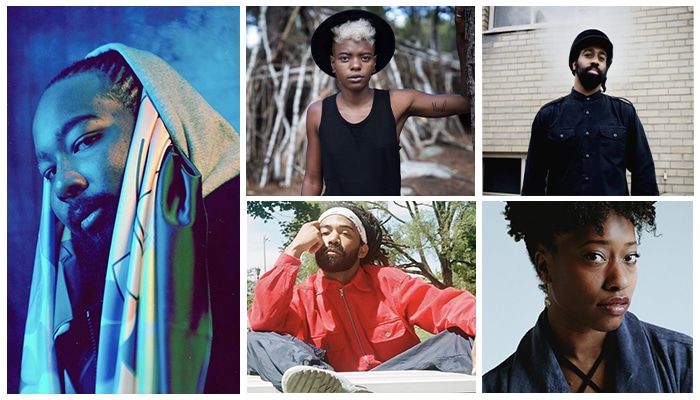 This year, TD Music and the Canadian Music Incubator have teamed up to showcase 65+ dynamic performances from BIPOC Canadian artists for the TD Music Connected Series.

Music is very important in our everyday lives, whether we’re listening to our favourite artists on a streaming platform or the radio, seeing them perform our favourite songs at a live event, or listening to songs in the background when shopping. And yet, as big of a role that musicians play in our everyday lives, there aren’t many programs built to pour back into them.

In a time when resources for musicians are scarcer than ever, TD is helping marginalized Canadian artists to continue doing what they love through the TD Music Connected Series.

Founded and Presented by TD Canada Trust and  TD Music, the program specializes in showcasing performances from various Canadians of colour, predominantly artists of East Asian, South Asian, Black, and Indigenous descent. Along with Francophone artists, the TD Connected Music Series gives these artists a chance to perform and showcase their talents in culturally and personally significant spaces across Canada, enabling them to not just fill a financial gap in touring exacerbated by the pandemic, but to shine a light on their stories through a culturally-rich lens.

The series started its second year on October 25th of last year, and it has partnered with Canada’s Music Incubator (CMI) to curate the unique performances from every artist on the series. There are a total of up to 65+ performances coming from an astonishing blend of established and emerging artists from across the country.

To follow up on its purpose of instilling diversity in all aspects of the series, TD Music and CMI have curated pre-recorded performances from content creators of diverse backgrounds, including producers, cinematographers, and editors. In terms of the program’s long-term effect, the TD Connected Music Series sustains relationships with various curators and artist organizations across Canada that CMI collaborated with to showcase various talents throughout the series.

At SHIFTER, we are always on the lookout for recommending unique Black artists and creatives to support and showcase. Here are five Black artists who we’re cheering for from the TD Connected Music Series.

Toronto rapper, singer-songwriter, poet, and artist, Terrell Morris, is taking his music to higher levels after the rising success of his 2020 album, Lavender, and most recently, Fortified. Citing Raphael Saadiq, Erykah Badu, and Jay-Z as his influences and favourite artists, he incorporates jazz, soul, and R&B throughout his music to channel the vision of his sound while opening up on various unique topics in his life.

With a strong résumé inside and outside of his music, Morris has collaborated with the likes of DijahSB, Adria Kain, and Ruben Young, and has performed at legendary Toronto venues such as Lee’s Palace and The Baby G. Check out his performance at Toronto’s Cold Tea Bar on the official TD Connect Music series channel on YouTube above.

New York-born, Montreal-based singer-songwriter and artist, Zaya Solange, infuses a unique flair to R&B, as she delivers an unapologetic feel and vibrancy to her sounds and lyrics. From unofficially performing her music at her first birthday party to sharing a stage with the likes of Jarabe de Palo and Kaytranada, Solange’s love for the stage has been ingrained in her throughout her life. It led her to many opportunities to perform at various local festivals in Montreal, such as the Festival International de Jazz de Montreal, Pop Montreal, and Montreal Funk & Soul Festival.

After being on TVA’s fifth season of La Voix, a French-Canadian version of The Voice, Solange took her talents to higher levels through the release of her song, “Black Gold”, and her announcement that her debut EP will be released anytime soon. Check out her performance at Montreal’s Cold Frédéric-Back Park on the official TD Connect Music series channel on YouTube above.

Cayman Islands-born, Toronto-residing music producer and DJ Paul Chin is a unique working force when it comes to the sound of producing and incorporating various sounds to every beat and sound he makes. His full-fledged DIY approach to music comes from his expertise in classical and jazz music education while following the practices and styles in hip-hop music and culture. He’s built up a strong résumé, working with the likes of Toronto artists Skratch Bastid, Harrison, Tanika Charles, and Shad.

His experiences have led him to be involved in making electronic music and creating the best beats known to man. His strong work ethic and ear for beats led him to perform with the likes of heavy hitters such as Snakehips, Falcons, Toro Y Moi, and Shigeto. Check out his performance at Toronto’s Oji Seichi on the official TD Connect Music series channel on YouTube above.

Ontario-born, Brampton-based singer, songwriter and artist, AHI (pronounced “eye”), has managed to gain lots of attention through his recent release last year entitled Prospect. Known to be one of the most powerful releases throughout 2021, the Brampton-based artist set his mind to making music after dropping out of school to travel throughout the world and follow a specific practice to find peace in his system.

With his debut album, We Made It Through The Wreckage, becoming one of his biggest projects based on the singles alone, his talents led him to perform at NPR’s Tiny Desk Concert, receiving a JUNO nomination for his 2018 project, and sharing the mic with the likes of Patty Griffin, Michael Franti, and Lauren Daigle. AHI’s music contains a conscious approach to his subject matter and lyrics while incorporating various genres to invoke many feelings on the subject matter portrayed, such as pain and healing, faith and resilience, connection and identity. Check out his performance on the official TD Connect Music series channel on YouTube above.

Haitian-born, Montreal-based pop-folk singer-songwriter Tamara Weber is a unique artist that  makes magic out of it. Known for her 2014 debut release, “Time, Wind and Fire”, she’s been in the limelight after her time on La Voix in 2014 and on The Voice: France in 2016; in fact, her audition performance of a rendition of Bob Dylan’s Knocking on Heaven’s Door has been heavily viewed all over the internet and was adored by many. Since then, she has released two EPs, including her most recent EP, Février. Check out her performance on the official TD Connect Music series channel on YouTube above.

TD Music has since started online streaming many performances from October 25, 2021 through to February 28, 2022. You can check out the recommended performances, along with others, exclusively on the TD Music Connected Series YouTube channel.