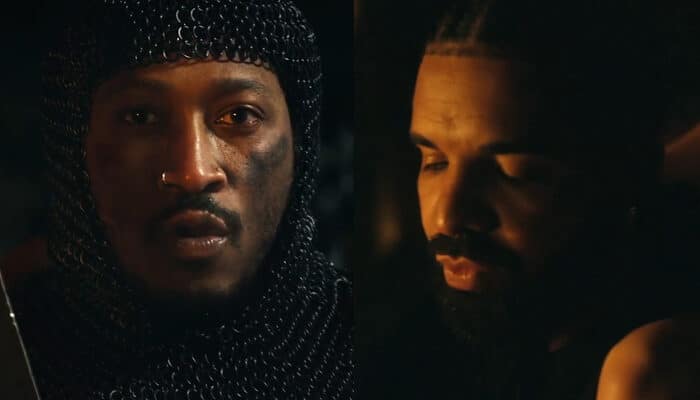 Future drops his epic Wait For You music video it’s so Toronto. Here are some of the Toronto connections in the video for Wait For You.

Last night, Future dropped new visuals for his hit “Wait For You” featuring Drake and Tems, the first single off of his recently released album I Never Liked You.

The video, which wracked up over one million views on YouTube immediately after its release, draws heavy inspiration from the rise of medieval and historical dramas like Game of Thrones, The Last Kingdom and Vikings.

“So it’s 4am at Dave n Busta’s @champagnepapi and I are smoking hookahs drinking and brainstorming ideas for @future “Wait For You” music video. We land on a Game Of Thrones concept. We laugh about the videos punchline and go play videos games. Two weeks later we were in the cold walking around in deep sticky mud questioning our decision. A week later the video is out and I think we made the right choice. Big up @Fela.tv for producing what should not be possible to produce in the time we had, the cast and crew that braved the elements brought their A game to make a movie!”

But aside from the video being a movie, a literal epic dubbed “The Tale of the Toxic King”, but it’s also very “Toronto”.

Not only does the video feature shots of Casa Loma, but the video was directed by Director X and executive produced by Taj Crichlow, co-founders of the production company Fela.

Trey Richards of 4YE Media, who rose to fame making Toronto-centric comedy videos, makes an appearance as the Traitor. Niko from OVO also appears to make a cameo in a fight scene with Drake.

If you see any Toronto connections we missed make sure to let us know. In the meantime, check out the Wait For You music video right here.

INTERVIEW WITH THE ICONIC DIRECTOR X