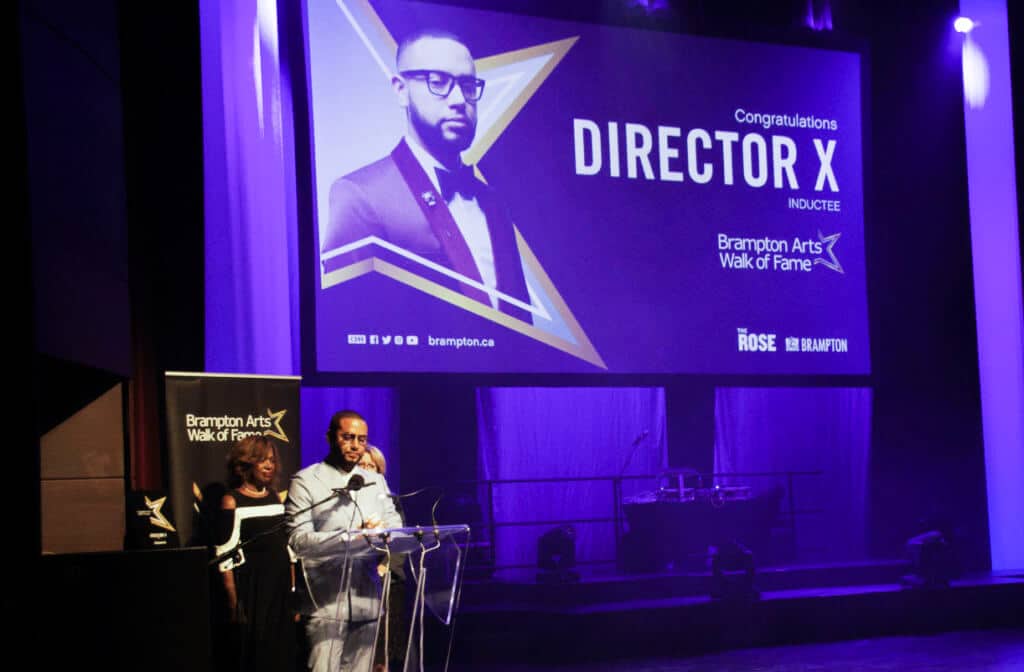 INTERVIEW WITH THE ICONIC DIRECTOR X

Iconic music video director and producer, Julien Christian Lutz, a.k.a. ‘Director X’ was recently inducted into the Brampton Arts Walk of Fame for his over 2 decades of well known achievements in the industry, working with the likes of Drake, Rihanna, Justin Bieber, Usher, Kendrick Lamar and too many others to name them all! Shifter Magazine’s Toronto correspondent Sheldon Barrocks was on hand for the ceremony and had an opportunity to sit down with Director X to discuss amoung other topics the Walk of Fame honour, his creative process and any advice he has for young creatives.

Sheldon | Shifter Magazine: Who was the first person you called, text or DM’d about being inducted to Brampton’s Arts Walk of Fame? What was that discussion like?

Sheldon | Shifter Magazine: For so many fans and admirers, being inducted is considered a major accomplishment. Why is this a big deal to Director X?

Director X: It’s my hometown so it’s always cool to be recognized by the place you grew up. You gotta appreciate these things. We’re going to have a great time [celebrating].

Sheldon | Shifter Magazine: As a storyteller through your work, walk me through your creative process. What are discussions like with an artist and their team when putting together a concept for a video?

Director X: I mean when its comes to music videos and stuff, number one is listening to the record. Listen to the record and try to understand and figure out what you’re going to take from it. Keep playing it until it comes to you. Start sketching, start writing. You gotta just start doing something, you know, and things will begin coming together.

Sheldon | Shifter Magazine: Without naming names, tell me about a time you may have had creative differences with an artist and their team. What weren’t you seeing eye to eye on. Were you able to reconcile and still produce the work?

Director X: Naw naw, this is theirs, you’re making something for them, I believe the artist has an instinct about their work. Anytime I disagree with the artist, when the project is done I found the artist [to be ] right, you know, within reason. An artist has a taste level that goes into their music, goes into their shows, and their fans understand that taste level. So me trying to impose my taste on them doesn’t make any sense.

Sheldon | Shifter Magazine: That’s a cool narrative. I think a lot of people who admire your work, myself included, want to have that insight of how ideas are developed, worked through and completed with you and the artist you’re working with.

Director X: Yeah like I said brother, [the artist] hired ‘you’. It’s not my place to get all crazy, you know.

Sheldon | Shifter Magazine: Personally I think that you’ve been a great example of maximizing your potential in what you have sought out to accomplish in your career. Give me some reasons why creatives (young and old) fail at maximizing their potential based on your personal experience.

Sheldon | Shifter Magazine: You recently sat down with Toronto mayor John Tory, Kardinal and Taj and discussed the current violence we’ve witnessed in Toronto this summer. Are you actively involved in any community related initiatives in the GTA? More creative arts programs like in the 90’s?

Director X: Not at the moment. I talk to a lot of people in the community who have programs going on and I always try and make myself available. I’m putting something together myself that I want to propose. But [currently] I’m not part of any particular community group, but I’m there if people need it.

Sheldon | Shifter Magazine: (laughing) Can we get some insight on what you’re looking to propose or is that top secret?

Sheldon | Shifter Magazine: Just like how you approached Hype Williams years ago to work with him, do you often have young, up and coming directors asking you to mentor them? Is there someone you’re mentoring right now?

Director X: There’s always someone doing that, but that’s not the game. I always find this confusing about kids. “Hey I just met you. Can I work for you, and be around you all the time, and then I can show you my work?” That’s not how the game goes. That’s not how it worked for me. Hype was my mentor, but I didn’t walk up to him and say “Hey can I spend all my time with you?” I was an intern at his company and then it grew from there. You gotta hustle! You gotta hustle! In fact, you walking up to me and tell me you want me to now open up my life shows me you won’t hustle. You’re asking me to give you everything [I know] and you ain’t a hustler.

Karena [Evans], they call her my ‘protege’. She works for my company. She started as an intern.  She came[with the purpose] to intern. She didn’t come into my office and say “Hey can you teach me, and spend all your time with me, and teach me everything you know?” It’s crazy. Think about that. Just think about that. People don’t think about what they’re saying before they say it. I [understand] the ‘want’ for it, but that’s not hustling. Hustling is getting in there and working, and then people see your values.

Sheldon | Shifter Magazine: It’s great to see your work and then now see what Karena Evans (Director of Drake’s God’s Plan video) has done. It’s amazing to see that transition. It’s really cool. I’m always big on people being willing to pass down their knowledge, but like you’re saying that person should be willing to hustle. I think that’s your main point. You don’t want to sow into someone that doesn’t appreciate hard work.

Director X: Yeah exactly, I’m sure you have young people in your office. You can look at someone and say “this kid works”. Now you have a reason to build a relationship.

Sheldon | Shifter Magazine: You seem to making a move into more TV and Feature Films. What does the next 10 years look like for Director X?

Director X: I don’t know brother. I just do the work. I don’t discuss…..I don’t talk like that.

Director X: Thank you man. Thank you, I appreciate that.

All images by Captured By Shani