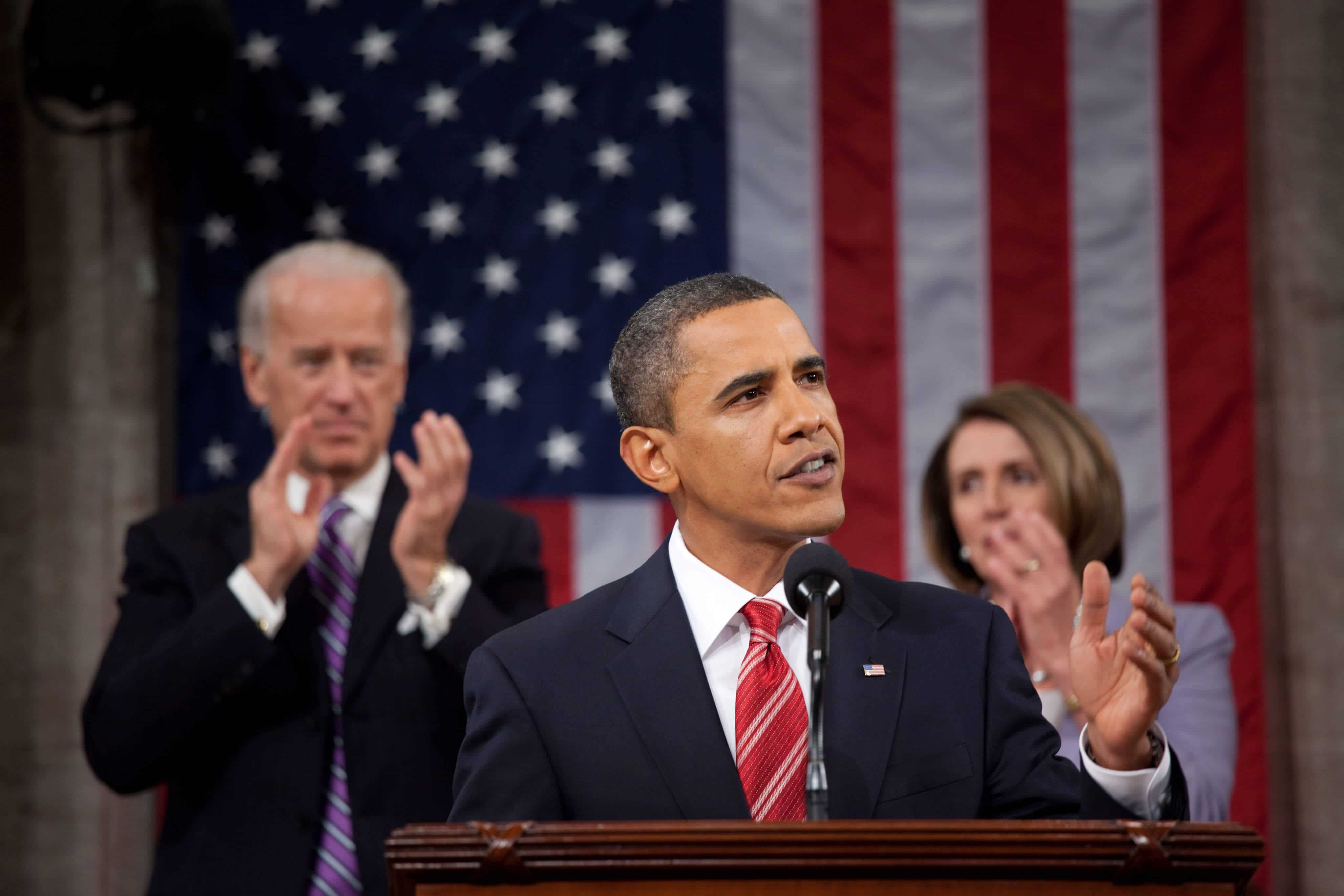 President Barack Obama gives his State of the Union address to a joint session of Congress in the House Chamber of the U.S. Capitol, Jan. 27, 2010. (Official White House Photo by Pete Souza) This official White House photograph is being made available only for publication by news organizations and/or for personal use printing by the subject(s) of the photograph. The photograph may not be manipulated in any way and may not be used in commercial or political materials, advertisements, emails, products, promotions that in any way suggests approval or endorsement of the President, the First Family, or the White House.

For many, Barack Obama’s election in 2008 was the fulfillment of a dream; the culmination of a century long struggle for civil rights. There was even talk, however wishful, of a post-racial America. His election, on the wings of one of the most memorable campaign slogans in U.S. history, “Yes We Can”, was underpinned by record levels of minority political participation, as well as significant support from white Americans.

Eight years later, an appropriate response would be “How Did We Do?”  For many black folks, the prospect of a black President was something they never thought they would see in their lifetime. Obama’s administration bore an unusually heavy weight of expectation even by Presidential standards.

Many of these expectations were confounded by Obama’s tentativeness when it came to talking in any explicit terms about race. The problem with this was that many African-Americans wanted him to do the exact opposite. In response, he emphasized that he wasn’t the President of Black America but rather the entire United States of America, and that his broad-based policies targeted at the most vulnerable, would ultimately positively impact the black community. This emphasis on class rather than race seemed to reflect the racial neutrality embodied in Obama’s own heritage. The cat was out of the bag- America’s first black president was *gasp*…half white.

Although Obama could rightfully claim to not be the President of only Black America, some of the challenges he faced were undoubtedly familiar to the constituency that laid claim to him. It wasn’t uncommon to see protests against the President framed in derogatory ethnic and racial terms. Despite his inhibitions when talking about race, and opposition to being characterized solely by his racial identity, he still ironically faced accusations of racial favoritism from opponents. In perhaps the seminal declaration of Obama’s “otherness” as America’s first black head of state, he was persistently hounded by conspiracy theories regarding his true birthplace, most prominently by his soon-to-be successor, Donald Trump. So pervasive were the challenges to the legitimacy of his heritage as an American that in a practice reminiscent of free blacks having to produce freedom papers lest risk re-enslavement, Obama was pressured into releasing his long-form birth certificate. Even then, this failed to quell the discontent among some of his opponents who continued to question his citizenship long after the certificate’s release.

There are legitimate concerns that the level of progress on racial issues didn’t match expectations. Racial tensions and police violence in minority communities rose to national prominence with the widespread discontent spawning the Black Lives Matter movement and nationwide protests. Furthermore, despite having started out his political career as a senator from Illinois, murder rates in urban centers like Chicago soared during Obama’s tenure. These facts must be grappled with when evaluating the 44th President’s legacy on racial issues.

Nonetheless, no President before him did more to address matters of systemic bias in both policing and the criminal justice system. Under the leadership of the United States’ first two African American Attorneys General, Obama’s justice department investigated more than two dozen police departments (including the Ferguson Police Department) for civil rights violations, and reached enforceable consent decrees with many of them.

The numbers seem to vindicate Obama’s argument that broad-based policies would ultimately benefit people of colour. The black unemployment rate dropped faster than the national rate and was cut in half from its high of over 16% during the Great Recession to below 8% by the end of 2016. Similarly in the case of health insurance, both blacks and Hispanics saw historic drops in the uninsured rate due to Obamacare. High school graduation rates in communities of colour also reached historically high levels. Obama, like no U.S. President before him, invested his time in hands-on mentorship, focusing especially on young men of colour through programs like his My Brother’s Keeper Initiative.

In light of these accomplishments, claims from prominent members of the black community, like P. Diddy and Dr. Cornel West, that Obama didn’t do anything for black people seem inaccurate and based on unrealistic expectations. Were there areas in which the President deserved legitimate criticism and in which more could have been done? Of course; some of which is detailed above. That said, the perfect shouldn’t be the enemy of the good, especially when we consider what was actually politically achievable for a President that faced historic levels of political opposition, and spent a majority of his time in office with the opposition party in control of one or both Houses of Congress.

Going forward, a focus on political engagement is key because the danger of regression under a Trump Presidency is real. Hence, while I don’t doubt the positive intentions of celebrities like Steve Harvey and Kanye West, those who would claim to represent people of colour must go beyond photo-ops and be willing to hold Trump’s feet to the fire. In this regard, Obama, who has said he’ll speak out if he feels fundamental freedoms are being threatened, may be able to play a pivotal role. His background as a community organizer may be especially helpful post-presidency in galvanizing grassroots political engagement among people of colour.

Barack Obama’s rise to power could be summarized with one word- hope. His time in office could be summarize with another four letter word- race. His tenure was marked with significant, as well as controversial legislative and political accomplishments like Obamacare and the Iranian nuclear deal. Nonetheless, decades from now when we remember his legacy, these accomplishments will likely pale in comparison to Obama’s election itself.

Dona Aholu is a Nigerian-Canadian data scientist and social commentator based in Ottawa, Canada