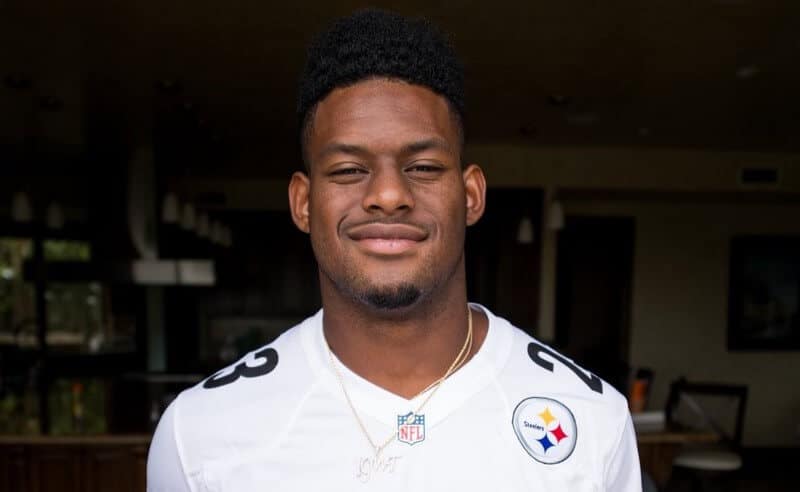 THE DOPE BRAND POWER OF JUJU

After the game the Steelers eventually won, Smith-Schuster was asked why he kept turning his head to look at the Lion defenders. “To be honest, the reason I kept looking back because in Madden, my speed is 82, 83,” joked Smith-Schuster, who lead the Steelers with four touchdown receptions at that point in the season. “The next thing you know, I pulled away, swerved to the right and was able to get the touchdown. Hopefully after today [Madden speed] gets boosted up.”

At first glance most wouldn’t expect an answer like that to come from a professional football player who’s usually trained to give stale, static, repetitive answers and provide little if any sound bites of interest.

But then you realize that the Steelers rookie happens to be the youngest player in the NFL at the age of 20 and launched JuJu TV, a Youtube channel that currently boast over 300k subscribers.

Smith-Schuster may be his given name, but JuJu is the brand that has given this dude a face in pop culture lately. He’s been all over social media, bringing heat on IG, Twitter and as mentioned Youtube.

More than just being present on social media, his content has been crazy original, fresh and just straight dope!

From recording a video responding to comments on Youtube, to doing an undercover news reporter prank on the street, and even dressing in full Steelers football gear in a return visit to USC (University of Southern California) where he played his college ball. During the visit he walked around campus meeting and having casual conversations with students and hilariously attending a lecture hall class, still wearing his full gear.

But his most recent public recruitment of Lebron to change sports and play for the Steelers has boosted the JuJu brand even further and have other wanna be pro athlete brand enthusiasts kicking themselves asking “Why didn’t we think of that?!” To make his point clear, Juju made his way to a Cleveland Cavaliers basketball game recently wearing a custom made #23 “King James” Steelers jersey just to meet Lebron. Juju of course played up to his audience online and appeared to ‘lose his mind’ after Lebron slapped his hand during the Cavs pregame team entrance. In a Twitter post JuJu boldly declared: “He can be the best athlete EVER if he makes the move to the NFL and wins a Super Bowl with Steeler Nation.”

As usual some critics may call his antics juvenile, over the top or attention seeking, but I say this is just branding genius. At 20 years old this dude has already figured out the limits of his future in pro football and is planning to still be relevant after life in the NFL.

Speaking of the NFL, this is exactly what they are missing. A personality that the next generation can relate to and one that speaks their language in their territory. Lately the millennial generation has been a tough one to crack for the NFL. Especially minorities considering the damaging impact the NFL has had in their handling of the Kaepernick ordeal.

The NFL may have no choice but to begin marketing a player like JuJu because of the weight and attention his personal brand is currently generating, both inside and outside football circles.

But that wouldn’t be possible unless his hype on the field matched his hype off of it, which it does.

After leaving LA area high school football powerhouse Cal Poly as a 5-star recruit to attend USC, he became a stud for the Trojans for 3 years before declaring for the 2017 NFL draft. The Steelers selected him 62nd overall in the 2nd round, which now looks like a bargain after he finished the season with 58 receptions, 917 years and 8 TD’s, including a 96 yard kickoff return for a score for his rookie season.

JuJu does what JuJu needs to do on the field to keep his brand relevant, but also seems to realize the connection social branding has to gaining more endorsement deals.

Gone are the days where on field play would be enough to get interests from other corporate brands. More and more companies are taking into consideration the social impact a player has on their target market.

Allison Kelly, VP of Client Management for GMR Marketing goes into detail about this in a recent article for Forbes Magazine:

“Brands are continuing to take greater advantage of athletes’ social and digital followings. In fact, an athlete’s social and digital following has become one of the more important points of criteria for brands when considering potential endorsers. Partnering with a socially influential athlete allows brands to ride the wave of influence that an endorser already has over their following, create more meaningful engagements with consumers and reach a broader audience altogether.”

Before the big game… 🙌🏾😂 pic.twitter.com/lw0bPXX0xE

I can already imagine brands that target JuJu’s generation are lining up to add him as a suitor to endorse their products, but more importantly JuJu gives the NFL a fun, relatable social persona to build on. One that doesn’t just look like Brady, Brees and Manning. The future of the NFL could depend upon how they work with personal brands like JuJu to connect to its younger, and growing diverse audience.

In the meantime, JuJu will continue being a content king and build his hype train to the point where we’ll start seeing Drake at Steelers games, whether or not he’s successful in recruiting Lebron. I for one love this kid and can’t wait to see what he does next.