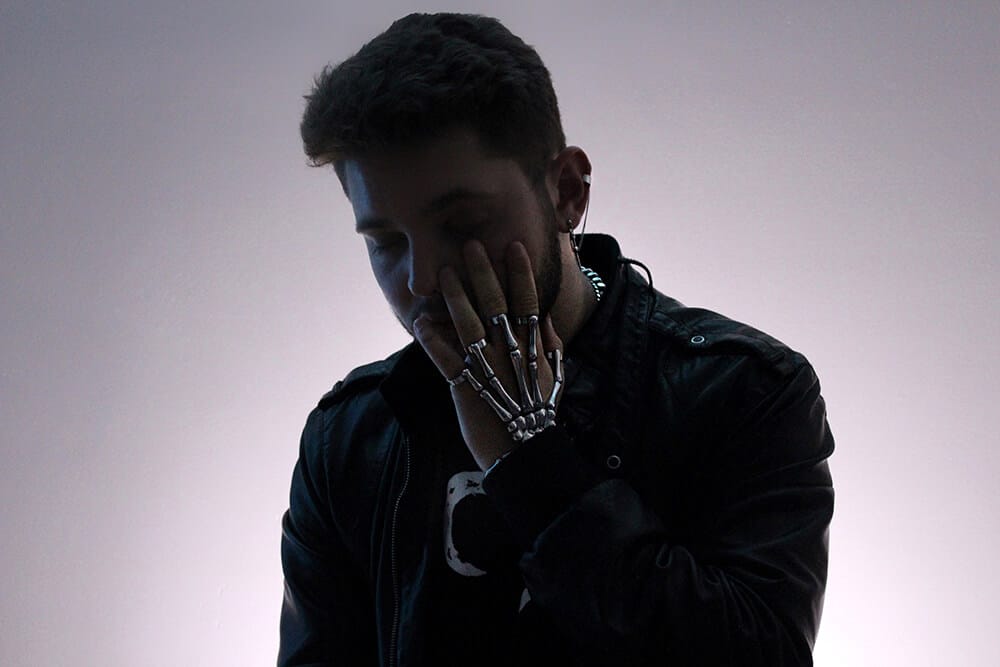 This month SHIFTER is adding a brand new feature to our website – Artist of the Month. Every month we’ll be featuring an artist who is on the rise. Our featured artists will represent a variety of creative disciplines – art, music, film, design, fashion, and more.

Our Artist of the Month for February is Toronto singer-songwriter OXYBUZ. While demonstrating hints of Alternative R&B, his versatility keeps him away from being locked into one genre. Creating dark tones and atmospheric melodies, he doesn’t expose much other than the music.

Tying in melancholy experiences of sex, drugs and sin through eerie, cinematic instrumentals and sinister harmonies – he maintains the image of an enigma throughout the city and wherever he is heard.

His first project VII, is a simple yet complex collection of the seven deadly sins and his interpretation of them through sound. Crossing paths with RIAA Platinum producer Adriano Allaverdi sparked the creation of VII sonically, and with the engineering of Austin Lee and Neo Tempus, OXYBUZ had a team manifesting this “Project of Hell”. While the project was released recently, this is only the beginning. He says that his “versatility will be shown in future projects, coming sooner than later”.

I spent almost a year developing a project that manifested in my head way before I even started making music. Aside from the satisfaction that came with finishing VII, I met a lot of good and bad people, and learned a lot with how this industry works. I’m grateful for the people that helped make it come to life and even more for the ones that stayed. VII is my greatest accomplishment to date, and it’s only the beginning.

I always hate this question because the list is endless, but anyways… The Weeknd (but the old Weeknd, none of that new stuff), James Blake, JMSN, XXXTentacion, Radiohead, FKA Twigs, MJ…I can literally go on forever. Outside of music, tops are Banksy and Nikola Tesla always. Remember these are inspirations, not idols.

Money sucks, it’s such a roadblock for creatives…but anyways if it wasn’t a thing, I’d be looking into places to inspire me further and I don’t think I would ever stop making music. There’s endless combinations and themes to go through and whole projects (not just music) that could be made. There’s so much more to making music than the sounds. I would love to be able to elaborate on each piece of music incorporating all aspects of art – making visual art past the music and having some haunting video series to go with them all.

Known. Everyday is about music for me. I see it in everything. I work as hard as I do at perfecting my craft so that I can influence and inspire other people in expressing themselves. All the concepts in my head are endless and to have them all develop gets overwhelming, but I would like to reach a point where I can manifest them all without worrying about the constant stress of life weighing down on me. I absolutely hate restrictions in my art. I want my own studio and my own time. Touring is definitely up on my list. I feel like that’s the best way to demonstrate to people what my music actually consists of. In five years I will be a self-sustaining artist and my music will have been heard.

Music has always been in my blood, like forever. Growing up, it was kind of the only thing I had to look forward to and it still is. A lot the music I make is based off experiences and emotions I bottle up. I’ve spent a lot of my life alone and it’s helped me in the creative process but mentally I deteriorate. I can talk about music all day, but I don’t really like talking about my personal self. The best I can do to show you who I am is make music and the best you can do if you’re interested is listen.

This industry is evil. Find people that you trust with your life, then tick with them and keep your circle small. Status means nothing and never strive for numbers or money. If you’re an artist, starve. Work on perfecting your craft and good things will come. The only validation that should ever be needed is your own, otherwise you’ll go crazy. Never stop working.

VII is currently my centrepiece as an artist. I’m proud of it. We made a concept come to life with full satisfaction. Using Biblical references to basically create a soundtrack to the seven deadly sins, we combined dark synths, heavy 808’s and raw instruments to make a theatrical representation of the sins that religion has taught to induce fear into everyone that follows. I’m never going to be done with VII, I’ll always throw some addition or extension of it. As for the upcoming stuff, just know I’m constantly improving as nothing is perfect. I’ll always try to have a distinct sound but I’m going to touch base with every genre. The new stuff is great and I can’t wait to release it. I’m experimenting with everything right now, trying to give people a taste of everything. I’m hyped.