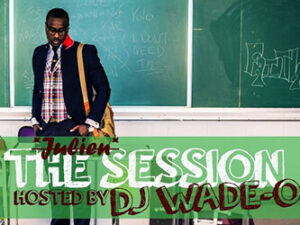 If you were a hip hop head in the late 90’s, Toronto native Julien brings us back to a time when the game was all about lyricism, word play and heavy hitters like Nas were king. After listening to The Session you’ll quickly find that Julien is one of the most gifted and polished MCs out there; a major feet considering he’s still relatively new to the game. He’s just a flat out rapper; up there with any “Christian” or secular MC, whether Lecrae or Drake.

On this mixtape Julien explores a variety of themes, from the human struggle with temptation on “Self-Control” to love and marriage on “White Dress”. He also reveals his broad musical influences on tracks like “S&M (Smoke and Mirrors)”, with its pop rock chorus and slightly airy and ethereal beat.

Despite the four and five songs on The Sessions that could stand on their own as hits, there is no doubt the banger “R.O.C.K.” is his most popular song. As I’ve found out, this song will have you jumping and losing your mind as soon as you press play.

Overall, if you’re a fan of thought-provoking lyrics and great production, you owe it to yourself to pickup The Session.

Kevin Bourne is co-founder and publisher of SHIFT Magazine. Born and raised in Toronto, Kevin currently resides in Ottawa with his wife and two children. Before SHIFT he worked in communications in the Parliament of Canada and is currently the leader of the media team at Kingdom Culture Ministries.