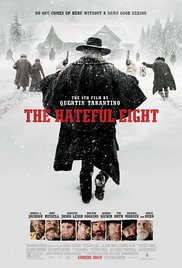 “Move a little strange, you’re gonna get a bullet. Not a warning, not a question. A BULLET” – Major Marquis Warren

I usually know what to expect from Quentin Tarantino. A well-written script, strong performances, some intriguing dialogue and of course, lots and lots of violence and carnage. Somehow Tarantino always manages to blend these elements together and turn them into pure cinema gold that still amazes me. Once more, this Academy Award-winning screenwriter and director delivers one of the best motion pictures of the year, as well as one of the best film in his filmography so far. Set many years after the American Civil War, this western follows eight strangers looking for shelter during a raging blizzard. Due to unforeseen circumstances, they are forced to co-habitate for a couple of days. Soon enough, suspicions rise among them as it becomes clear that some of them are not meant to walk out alive.

As expected, The Hateful eight is driven by iconic performances and exquisite writing. You see, the progression of the plot depends entirely on dialogue and every single line of the said dialogue is perfectly delivered by the likes of Samuel L. Jackson, Bruce Dern, Kurt Russel, Jennifer Jason Leigh and the rest of the crew. On the other hand, the performances in this film depend strongly on Tarantino’s rich and well-crafted screenplay. Tarantino is a master when it comes to writing unique characters and pulling the best performances possible from his actors and actresses. What we witness here is the perfect symbiotic relationship between two of the most important elements of filmmaking- acting and screenwriting. It is also apparent that every character in this film was written individually as they come to life in marvellous ways in the hands of such strong performers.

One of Quentin Tarantino’s well-known signatures is his nonlinear narrative. I must say that I’m not a fan of this approach. Without giving away any spoilers, one might also say that the director could have cut a particular sequence from the film that only made it longer, which leads us into one particular negative. The Hateful Eight is 2 hours 59 minutes long and starts off very slowly. It focuses a lot on buildups and it is easy to identify many moments where cuts could have been made. That being said, even though the pacing picks up and the payoffs are worth it, I can’t help but to feel like The Hateful Eight was long only for the sake of being long. Maybe that will be different when I watch this movie a second time.

On another note, the cinematography in this film is spectacular and pays great tribute to the 1960’s spaghetti westerns and other classic genres. Tarantino shot this movie in 70 mm (with the same lenses that were used on movies like Ben Hur). Because of that, it is highly recommended that you watch the film in this format if you want to enjoy the full cinematic experience. Shooting this movie in this format allowed for some breathtaking wide shots reminiscent of classics such as Lawrence of Arabia and It’s a Mad, Mad, Mad World. Speaking of classic experience, we should also give honour to the great Ennio Morricone who delivers a score that is essential to this film. Morricone is the veteran behind some of the most iconic soundtracks in cinema, particularly the western genre (The Good, The Bad and The Ugly, Once Upon a Time in Mexico).

There is no other way to put it. Quentin Tarantino deserves to be on everybody’s “Top 5 best directors of modern cinema” list. I will challenge anyone who dares to say otherwise. As I was describing this film, it felt to me like I was praising a classic. The more I think about it, the more I am excited about this film and I cannot wait to see it again. Without the shadow of a doubt, I can say Quentin Tarantino’s The Hateful Eight will stand among the greatest film of 2015, as well as the last decade.