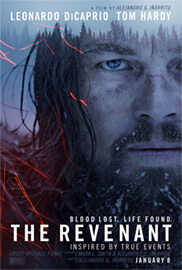 In The Revenant, legendary explorer Hugh Glass fights for survival in the uncharted wilderness of 1820s America after being mauled by a bear and left for dead by members of his hunting team.

If I had to describe The Revenant in a single term, it would probably be “terrifyingly brutal”. Make no mistake: it is not for the faint of heart, but there is so much more to this film than what’s seen in the trailers. The story itself isn’t anything special—yes, Leonardo DiCaprio gets mauled by a bear, and yes, he spends most of the film’s runtime battling the elements and chasing after the man responsible for his near-death. At its core, it’s the kind of tale of betrayal and vengeance that moviegoers are familiar with, almost an afterthought or a ploy to set up the film’s structure. Performances from its star-studded cast as well as amazing production quality both in front of and behind the camera are what puts it over the top, turning it into one of the most breathtaking cinematic experiences of the year.

The film’s opening sets the tone perfectly: a dream sequence showing memories of the main character’s formerly peaceful life followed by a slow tracking shot that pans over rushing water and settles on the barrel of a rifle. This isn’t the only long take present in the film, nor is it the only evidence of director Iñárritu and cinematographer Emmanuel Lubezki’s creative genius. Nearly all of the numerous combat scenes contain carefully crafted continuous shots that are both exciting to watch and easy to follow, and the use of natural light, especially during the nighttime scenes, does well to keep us immersed in the film’s events.

In what had to be some of the most difficult work of his career (that was real bison meat), DiCaprio leads the film as Hugh Glass, a scout working for a company that sells and trades fur pelts, and trudges through the 1820s American countryside in one of his finest performances to date. After the “Glass VS angry bear” scene, whose terrific visual effects and unsettling close-up angles are sure to make it one of the most infamous scenes of the year, DiCaprio spends a good third of the movie alone and manages to keep our attention even with almost no lines. It’s a performance that’s very much empowered by his strong sense of presence. A stellar, very subtle score accentuates some of the wider shots of his journey, but never overstays its welcome, which, by contrast, adds gravitas and tension to the film’s various quieter scenes.

The film also benefits from a great supporting cast led by Tom Hardy’s main antagonist, John Fitzgerald; Domhnall Gleeson as the leader of the expedition, captain Andrew Henry; and a breakout performance from young actor Forrest Goodluck as Glass’s half-Native American son Hawk. Unfortunately, the 157-minute runtime makes the story seem overlong, and seeing Glass fight the cold over and over gets a little repetitive by the time the supporting characters return in the film’s third act. Some of the sweeping sky shots, though admittedly gorgeous, could have been cut as well to shave some time off the final product and keep the pace moving a little faster.

Like Spectre and Sicario earlier this year, it suffers from a few minor issues, but I’d definitely recommend The Revenant to anyone who enjoys a film that offers more than just an interesting story. It’s amazingly well crafted, supremely shot, and much more than a typical revenge thriller, worth watching more than once. It’s one of the best films of 2015—a pretty late addition to my top-ten list, but one not to be missed nonetheless.