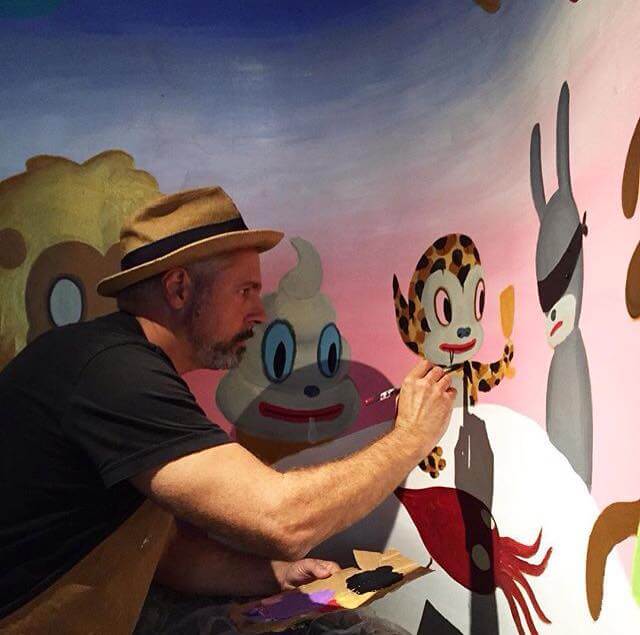 REVIEW – GARY BASEMAN’S MY EYES ARE BIGGER THAN MY STOMACH

Gary Baseman’s year-long exhibition My Eyes Are Bigger Than My Stomach is now on display at Drake One Fifty in Toronto. A gathering of all his furry friends from every corner of the imagination, from its darkest depths to its heavenliest highs are all brought together by food. Because even you can’t decide which food you eat sustains which appetite, you must feed all of yourself and hope that the best parts are nourished the most…

The exhibition includes what I like to call “The Wall of Dangling Tobys” in the foyer of the restaurant, placemats featuring pictures of Baseman’s meals from around the world with a complimentary sketch, a mural that takes up a booth of three separate tables in the front of the restaurant, a wall of food trays decorated with sketches at the back of the restaurant, and an assembly of plates starring Toby’s Secret Society along the back wall.

In keeping with the theme of “the beauty of the bittersweetness of life”, the exhibition is explored in the metaphorical sense of one having eyes bigger than their stomach. The discrepancy between what you feast your eye upon and how much of that you can actually consume can be easily translated to other areas in one’s life other than food. Biting off more than you can chew or taking on more than you can handle can be a daily struggle.The undertaking of such a task can have a noble cause, one of beauty even. This task however can be checked by things like physical limitations. Maybe that decadent five layer cake called “Chocolate Death” tastes great but you just ate a bowl of pasta and your stomach feels like it’s going to explode. Or maybe it’s the pretty redhead with legs for days that is just so mesmerizing to look at but trying to converse with her is a headache.

Either way, it can be seen that the beauty in life abounds, from everything from food to sex, the eye can take that all in and appreciate it. On the flipside, we can’t always devour that which looks tasty; sometimes it’s too much, sometimes it isn’t good for us and sometimes it’s not even ours. The trick is to knowing your limits, knowing which parts of yourself need the most sustenance, and knowing who or what to share your table with.

Click here for more information about Gary Baseman’s My Eyes Are Bigger Than My Stomach.

(Reposted with permission from the author)