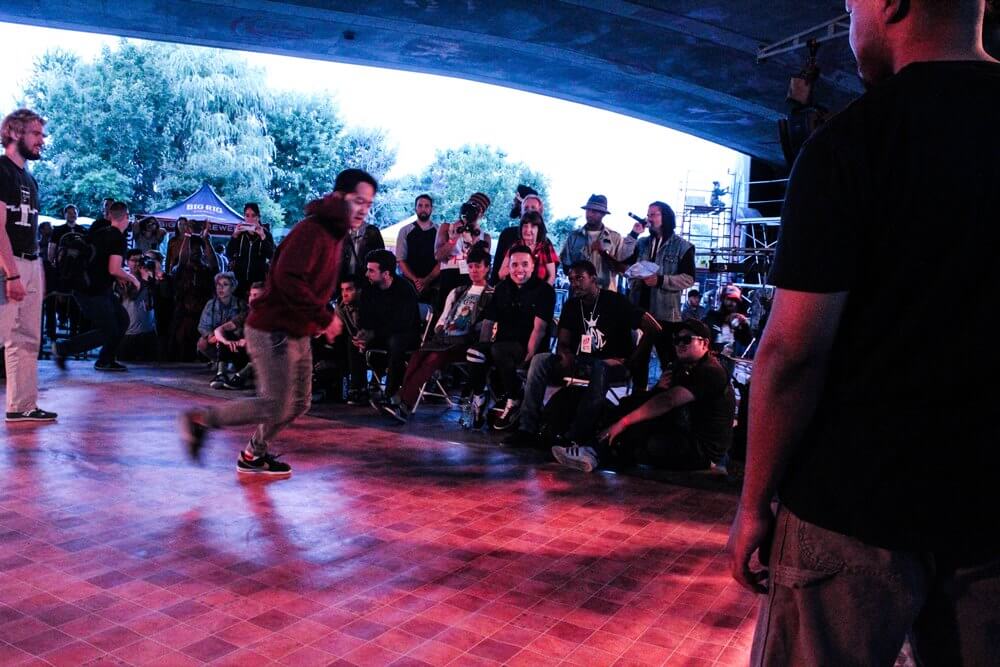 HOUSE OF PAINT IS A HIP-HOP HEAD’S DELIGHT

This past weekend was the annual House of Paint hip-hop festival, a must-see event on my calendar every year. It really is one of the most underrated events, not just within Ottawa, but North America wide.

One thing that I’ve noticed is House of Paint’s biggest strength is also its weakness. It provides an small venue and intimate atmosphere to enjoy hip-hop culture, but you sometimes wish more people were tuned into the magic that’s happening under the Dunbar Bridge. At some points I looked at the caliber of talent on the stage and then looked at the crowd and wondered why the whole city wasn’t there.

House of Paint’s other strength is how well rounded it is. All elements of hip-hop- Mcing, DJing, Graffiti, and Bboying- are celebrated. Some people include beatboxing and knowledge among the elements and there was some of that too.

The festival opened on Thursday with the OG 500 Poetry Slam and DMC DJ Championship, but in talking briefly to the founder, Sabra Ripley, she reminded me that despite the big concert on Sunday night, the Saturday Bboy and popping battles were the main event of the festival. It was a quick reminder that House of Paint hasn’t lost touch with what hip-hop is all about. The year’s Bboy crew battle champions were Groundwork Sessions Crew out of Whitehorse, Yukon.

Aside from the battles, one of the Saturday highlights was a performance by Ottawa-turned-Toronto rapper Dynamic. I have to admit I’d never heard of him before (I was in Toronto for most of my life), but I’m glad I did. I tried to go back to my car a few times in between songs but kept getting drawn back by the next song. He had such an effortless flow and polished production I had to keep listening.

On Sunday, the annual knowledge conference, also known as “Ted Talks for hip-hop heads” according to the festival websitey, included a panel discussion and keynote by A-Trak.

Opening for the headliner were the Montreal hip-hop duo Dubmatique. Having grown up in Toronto, I haven’t been exposed to much French hip-hop. But these guys seem to be a big deal. Over the past 25 years they’ve travelled extensively and have won awards, and by the way the crowd reacted, they have a fan base in Ottawa. I was definitely impressed by their flow, production and ability to actually rhyme words in French. I’ll definitely be checking out more of their music.

Then came the shows we were all waiting for. Although A-Trak is a bigger name right now, as someone who was in high-school in the 90’s, Smif-N-Wessun was the main event for me. I got in a bit of heat after my Migos review from Bluesfest, but the contrast between the two shows couldn’t have been more clear.

Tek and Steele, also known as Cocoa Brovaz, know how to engage a crowd. They were real masters of ceremonies, not just in their rhyming but it was as if they were hosting the event. They moved barricades to let fans into the photo pit, smoked a spliff from one of the videographers in front of the stage, and shared their love of hip-hop.

They went through classics like Let’s Get It On before going into one of my top five favourite hip-hop songs of all time, Raekwon’s Incarcerated Scarfaces. That provided the perfect segue into my favourite Cocoa Brovaz song, Black Trump, featuring Raekwon.

They then performed a medley of their favourite hip-hop songs- Who Shot Ya? By Notorious BIG, Shimmy Shimmy Ya by ODB, Boyz-N-The-Hood by Eazy-E, and Shook Ones as an ode to the late Prodigy of Mobb Deep. Usually I hate seeing rappers perform other people’s songs, but you could tell that Smif-N-Wessun are just fans of hip-hop and their love for the music was contagious.

They closed with some more SNW classics like Bucktown and Sound Bwoy Bureill. Then the headliner, A-Trak, came to the stage. I might be aging myself in saying I’d never heard of him before but now I have and I’m a fan.

He looks like your typical EDM DJ but his love and respect for hip-hop was evident. At one point he took us back to Rapper’s Delight by Sugar Hill Gang and then to Made You Look by Nas. The whole time he was feeling the music like we was the only person under the bridge.

Like other festivals in the city of Ottawa, House of Paint also allows local talent to shine. Some of the local standouts that I was able to check out were Cashtro Crosby featuring Ottawa native City Fidelia and Rita Carter, a Lauryn Hill like vocalist and musician with a message, who can do it all.

Overall, the 2017 edition of House of Paint was very well done and had a great lineup. If you’ve never been and need a reminder of why you love hip-hop make the pilgrimage to House of Paint. I’m looking forward to seeing what they’re cooking up for 2018.